Jamaican runner’s three-peat in London made him a legend. As Jonathon Gatehouse explains, there's more to do 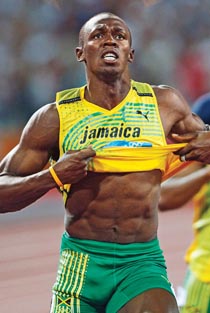 Just a touch over a minute and 18 seconds. That’s all the time Usain Bolt actually spent running at the London Olympics. Three 100-m sprints, three 200-m runs, and the anchor leg of the men’s 4 x 100-m relay, spread over the course of a week. Not a bad return on investment considering his results—three more gold medals.

The 26-year-old Jamaican had set himself an immodest goal heading into his second Summer Games: to become a legend. And by winning the same three events he had taken in Beijing back in 2008—sprinting’s triple crown—he certainly made his case. There’s only ever been one other track and field athlete to win three events at consecutive Olympics: Ray Ewry of the U.S., who took back-to-back golds in the standing high jump, standing long jump, and standing triple jump in 1900 and 1904. (He won two more of those three events in 1908.) But it’s a safe bet that he didn’t cap it off by partying into the wee hours of the morning with leggy members of the Swedish women’s handball team. “I’m the greatest,” Bolt repeatedly told reporters, never failing to follow it up with his infectious grin. And really, who’s arguing?

In a discipline that is filled with chest-thumpers and enormous egos, Bolt towers above his competition. Before the six-foot-five star came along, sprinting was considered a shortish man’s game, with races won via quick exits from the blocks and low-slung drives over the first 30 m. But where Bolt excels is down the back stretch, standing tall with his long legs gobbling up the track. “I’m kind of a poor starter,” he explains in a video he recently posted on his website. “At 60 m, that’s where I become a beast. That’s when I start to dominate a race.” By the 90-m mark the work is usually over, and the celebration well under way. “The last 10 m you’re not going to catch me. No matter who you are, no matter what you’re doing. That last 10 m takes me three-and-a-half strides.”

Then there’s the real show—Bolt’s carefully choreographed pre-race psych-outs and epic post-victory celebrations. The 100-m final in London provided a textbook example. As his competitors tried to settle into the blocks, Bolt exchanged quips with trackside volunteers, mugged shamelessly for a worldwide television audience—smoothing his hair, wiping mock sweat off his brow—and shushed the crowd by putting a finger to his lips when the announcer appealed for quiet in the stadium. Then, just before the starter’s gun went off, he winked. The race was over before it had even begun.

Afterwards, clad in his green, gold and black national flag, he circled the stadium feasting on the adulation: wading into the crowd to accept hugs and high-fives; directing the photographers into position to catch his best side as he unleashed his “Lightning Bolt” pose; turning somersaults on the track; even throwing down a quick boxer’s shuffle à la Muhammad Ali. “I celebrate to the world and the crowd loves it because I put my flavour to it,” the sprinter explained. “I make them love and enjoy me.”

And there is still room for improvement. Bolt’s winning times in London—9.63 for the 100-m and 19.32 for the 200-m—were well off the world records he set in those events back in 2009 of 9.58 and 19.19 respectively. His pre-Olympic training had been hampered by a back injury, and perhaps a certain lack of focus. (Busy travelling the globe to promote the interests of Puma, Gatorade, Visa, Nissan and his other sponsors, he now competes at only a half-dozen meets per year.) In a recent interview, Bolt said his new goal is to run 100 m in 9.4 seconds, and predicted he might do it as soon as this coming summer. If so, he will not just be rewriting the record books, but the scientific texts as well. A few years ago, an American study crunched 100 years of sprint results and concluded that 9.44 seconds was the fastest that a man would ever run that distance.

The post-Olympic hoopla included appearances on Saturday Night Live, DJing at parties in his honour, and a lengthy tour of the Far East, where Nissan unveiled a special Bolt edition of its GT-R sports car (gold-coloured, of course), and named him their “corporate director of excitement.” The sprinter has quietly let it be known he intends to go for the three-peat at Rio 2016 and add a new event or two, perhaps taking a stab at a medal in the long jump, or running the 400-m. In early November, he resumed training in Jamaica.

For even if Usain Bolt is, as he claims, “the greatest athlete to ever live,” there is still more to do. After all, it doesn’t really take that much time.