The new numbers, including a worst-case death toll scenario, are sobering. But unlike Ontario, the province opted not to project beyond April 30. 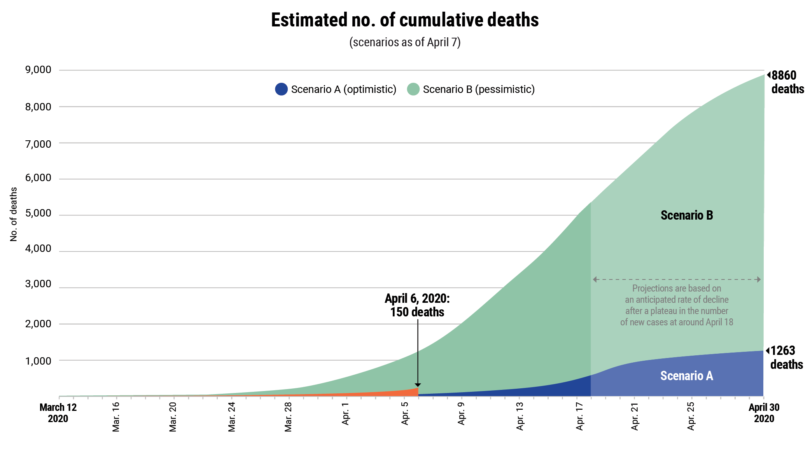 Quebec’s projections on how the COVID-19 crisis could unfold in the province appeared similar to that of Ontario’s model, unveiled on April 3. Both show the public that the road ahead will be difficult and painful. Yet, like those two provinces, each contained distinct differences, and, in Quebec’s case, a few digs at its neighbour to the west.

Ontario’s 17-page document was filled with charts and graphics, including projections to the end of the pandemic, which may be 18-24 months from now. By then, Ontario speculated, between 3,000 and 15,000 residents could die of the virus, even with self-isolation and other public health measures. Its worst-case scenario pegged that number at possibly 100,000.

In contrast, Quebec’s seven-page document has just four charts, as its public health experts refused to be drawn into “what if” scenarios.

“Some have made projections that go much farther into the future than we have—the province next door—but there are too many factors that can intervene,” explained Dr. Richard Masse, director of Quebec public health.

Such variables include the possibility of new medications, even a vaccine, or new self-isolation measures. So Quebec stopped its modelling on April 30.  “We’re comfortable to give numbers for 30 days. But if you ask me for six months or 12 months, me, I’m not comfortable,” Masse continued.

The numbers are sobering enough, especially the death toll. A week ago, Quebec had recorded just 33 deaths. Today alone, 29 more were added to a tally that now stands at 150. By the end of the month, the official “optimistic” scenario has a death toll of 1,263. That assumes Quebec follows the path of Germany, which has seen lots of cases, but relatively few deaths as it quickly identifies cases and its health care system has been able to cope with the pressures placed on it.

The worst-case scenario follows that of Italy, which is the world’s COVID-19 boogeyman because it didn’t shut down until after the virus had spread like wildfire, leaving it with nothing but dire options. There, so many are dying so quickly that crematoria are overwhelmed. If that scenario bears out in Quebec—and Masse is confident it won’t—then the death toll by April 30 could be 8,860.

Quebec’s possible scenarios at the end of April are similar to those of Ontario, which projected that a “no intervention” model (think Italy before it locked down) could result in 6,000 dead, while current intervention measures are projected to slash that toll, though it could still be 1,600. So, for as much as Quebec presented a different type of model to its residents, its projections, at least for the next few weeks are horrifyingly similar: both provinces, hard hit by COVID-19, are finding that April is indeed a cruel month.