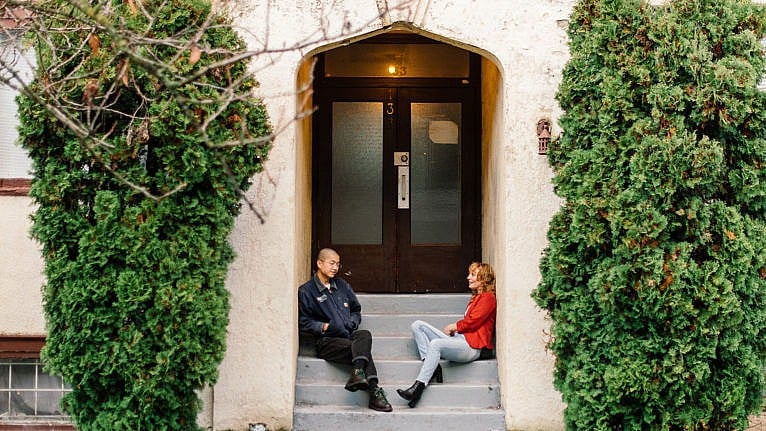 Tao (left) and Schofield outside their Vancouver apartment building; the friends are fighting evictions in the city’s Mount Pleasant neighbourhood (Photograph by Alana Paterson)

On March 17, B.C. declared a state of emergency, and 24-year-old Maya Schofield lost the restaurant jobs that had been putting her through school. Schofield started a group chat to check in on her neighbours who lived in her apartment building, but the effort petered out with the demands of the final weeks of her undergraduate degree. After a long pandemic spring and summer, her friend Vince Tao asked her for help with a Vancouver Tenants Union campaign to fight evictions in the city’s gentrifying Mount Pleasant neighbourhood by a developer planning to build a six-storey condo.

Schofield, who had dabbled in activism as a student but had never gotten seriously involved, was swept up in the energy of the campaign. She put in up to 12 hours of work each day for weeks, once spending so long at court that her car got towed. After years of sharing misery with her peers over Vancouver’s crushing rents and terrible landlords, Schofield felt like she was finally doing something about the situation. “Technically it was for one family,” she says, “but really it was for all of us.” Schofield is part of a pandemic resurgence of an old idea. By forming tenant unions, renters band together to call for lower rents, better property upkeep and policy measures like rent control, much as labour unions bargain collectively for better wages and working conditions. The pandemic has brought tensions over the decades-long housing crisis in Canada’s cities to a boiling point, with tenants organizing rent strike campaigns, calling for rent relief and fighting evictions.

READ: Is real estate still a good investment for Canadians?

“I think the pandemic really broke open Vancouver’s notorious feeling of always being squeezed by rent,” says Tao, the friend who got Schofield involved in the Vancouver Tenants Union. “Always feeling alone as a tenant, always feeling under the thumb of a landlord.”

The group launched in 2017, when housing prices and rents were recovering to an all-time high, less than a year after they briefly dipped when the provincial government introduced a 15 per cent tax on foreign buyers. That short slide had proven a blip amid years of massive annual increases, with rents soaring in pace. When the first lockdown hit in March, the median rent for a one-bedroom apartment was $2,200 in Vancouver, according to the rental website PadMapper.

Measures like the Canada Emergency Response Benefit, a provincial ban on evictions and rent increases, and a rent supplement of up to $500 per month helped stave off a total economic meltdown. But many tenants were still unable to pay rents that accounted for a significant percentage of their incomes when they lost their jobs. Tao says the Vancouver Tenants Union was bombarded with inquiries from tenants in the spring, with 50 people expressing interest in organizing their buildings.

Other Canadian cities have seen similar waves of tenant activism. Montreal renters organized a “white sheet campaign,” with tenants who supported a rent strike hanging bed linens from their doors and balconies. In Toronto, activists have physically blocked rental enforcement officers from conducting evictions, presented a list of demands to one wealthy landlord at his home and organized neighbours to attend eviction hearings as a group.

READ: ‘You became part of my newfound identity’: A tenant thanks her landlords-turned-friends

While many low-income tenants are in dire situations, average rents have actually fallen for the first time in many years in Canada’s major cities, thanks to higher vacancy rates in the absence of international students and Airbnb guests. In October, compared to the same month the previous year, the average rent for a one-bedroom apartment fell 10.9 per cent in Toronto, 9.1 per cent in Montreal and 7.8 per cent in Vancouver, according to an analysis of PadMapper data by RBC Economics. But Tsur Somerville, a professor of real estate finance at UBC’s Sauder School of Business, says high-income tenants who have kept their white-collar, work-from-home jobs have been the main beneficiaries of that rent reduction: “At an overall market level, the pandemic has worked in tenants’ favour,” Somerville says, “but that doesn’t mean it’s benefited each individual tenant.”

Some well-off renters may be getting a break, but the underlying factors that caused the affordability crisis in Canada’s cities haven’t changed. The real estate market remains red-hot, with the Real Estate Board of Greater Vancouver reporting the benchmark price for Vancouver homes reached $1,045,100 in October, a six per cent increase from the same month the previous year.

“If there’s a post-COVID boom, the benefits of that are going to flow to the exact same people they were flowing to before, and leave the exact same people out,” says Daniel Oleksiuk, a director of Abundant Housing Vancouver, an organization that advocates for building more housing to address the city’s affordability crisis. “If it comes roaring back, it’s going to be really bad.”

Tao says the increase in housing prices and the faster pace of construction in the pandemic have helped the Vancouver Tenants Union recruit new members, as workaday renters watch luxury housing go up in their neighbourhoods. The root causes that led to the formation of Tao’s group are not going anywhere, but he says the fact the pandemic brought renters together is meaningful in itself.

“It brings back this idea of neighbourliness—that there is a collective urban life worth fighting for,” he says. “The tenants union, at least for me, is about connecting people and making them feel less alone.”

This article appears in print in the February 2021 issue of Maclean’s magazine with the headline, “The renters revolt.” Subscribe to the monthly print magazine here.