Return to Qaraqosh, a city of ruins

Celebratory gunfire erupts just as the seven nuns turn a corner and begin to pick their way through the devastation wreaked by the so-called Islamic State. They are surprisingly indifferent to it, despite the fact that every once in a while militant snipers have infiltrated the shattered streets of this ghost town and taken pot-shots at the soldiers who patrol its streets.

Their crisp white gowns are bright under Iraq’s midday sun as the nuns move over rubble and broken glass. Overhead an attack helicopter circles. One of the nuns, frail and elderly, stops to watch it pass while her youthful companions, some with tears on their faces, continue to tread lightly through their own personal hell.

Wherever the Islamic State has gone it has left scenes of purgatory in its wake, but none so far can compare to Qaraqosh, 14 km southeast of Mosul’s outskirts. Not much more than a decade ago this predominantly Christian town—close enough to the frontlines of the Mosul offensive that the rumbling from airstrikes raining down on Islamic State positions intermittently wash over its broken remnants—was one of the bustling hearts of the Middle East’s Syriac Catholics. It was home to 10 churches, including the second largest in the region, the Church of the Immaculate Conception.

Now it is in ruins. 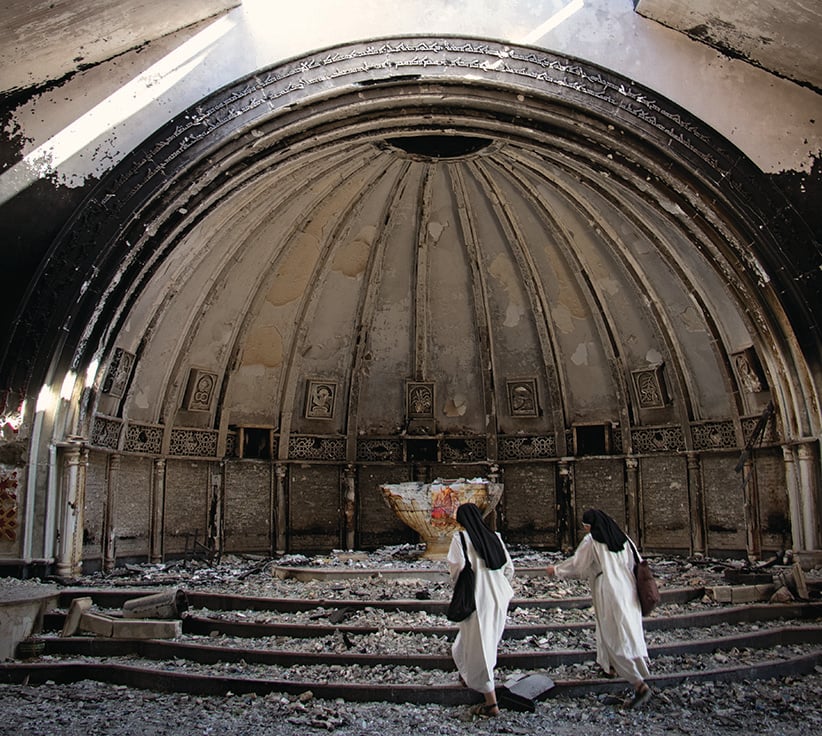 Nuns from the Syriac Catholic Dominican Sisters of Saint Catherine of Sienna visit churches in the predominantly Christian town of Qaraqosh. (Photograph by Adnan R. Khan)

For the first time since they fled on a warm summer night in August 2014, gathering up whatever they could in a frantic midnight escape just as Islamic State was pushing into Qaraqosh, the Dominican Sisters of Saint Catherine of Sienna are back to see what is left of their home. Most of them grew up in this town, playing on its broad streets as schoolgirls, making picnic trips to the banks of the Tigris River.

“But the church was the centre of our lives,” Sister Ferdous Zora, 36, tells Maclean’s. “I sang in the choir. I had my first communion here. It’s so hard to imagine it now looking at what’s left. It’s heartbreaking.”

Christians have suffered a particular savagery under Islamic State rule, but they’re not alone in their suffering. Of the dozens of times this reporter has witnessed the carnage left after war, from Afghanistan to Syria, none have been as desolate and dangerous as what the Islamic State has left behind. Their bomb-making experts have demonstrated a singularly macabre brand of creativity, transforming entire towns and villages into improvised explosive devices. Every exposed wire and mound of dirt is a potential trap; every tunnel conceals the threat of violence in its claustrophobic gloom. 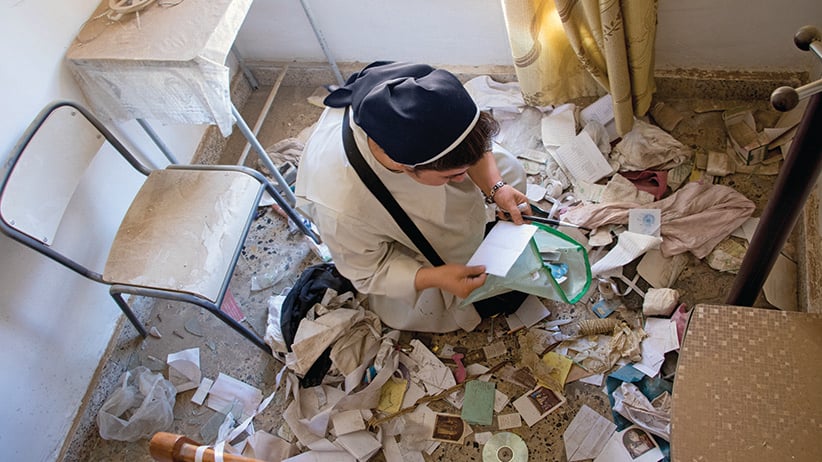 A nun from the Syriac Catholic Dominican Sisters of Saint Catherine of Sienna searches for personal documents after returning to her room for the first time in more than two years. (Photograph by Adnan R. Khan)

But the sisters remain defiant. They rummage through their old rooms in the convent attached to the Immaculate Conception church, pulling out documents and personal items with little regard for the potential danger. One of the Sisters discovers an icon she had kept with her since 1997 but left behind in the chaos of her escape—a portrait of the Virgin Mary cradling baby Jesus—fully intact. Later, she uncovers her master’s degree, which she needs to pursue her dream of a Ph.D. in physics.

These are the rare instances of joy. It’s hard to ignore the growing anger, even among women who have devoted themselves to spreading a message of love and forgiveness. As the group makes its way through the town, more celebratory gunfire erupts nearby from a group of Christian militiamen returning to base after liberating another village a few kilometres away. None of the sisters pay any attention. “We’re used to it,” Sister Luma Khudhr, 40, says grimly. “We have lived through too much war.”

The next stop on their tour is a house they had converted into a school where the Sisters taught language classes to locals and held spiritual discussions. They decide not to enter because of the potential for booby traps. From the blown-out windows it’s clear, in any case, not much remains to be salvaged. A sign leaning on a windowsill belonging to Islamic State, re-anointing the house as one of its administrative centres, finally draws out Sister Luma’s rage. She sends it hurtling to the ground.

Asked how she felt seeing her church reduced to a burned-out shell, Sister Ferdous has difficulty putting her feelings into words.

“I can’t hate anyone,” she says. “But it’s hard when you see the destruction. I can’t describe my feelings toward ISIS.” 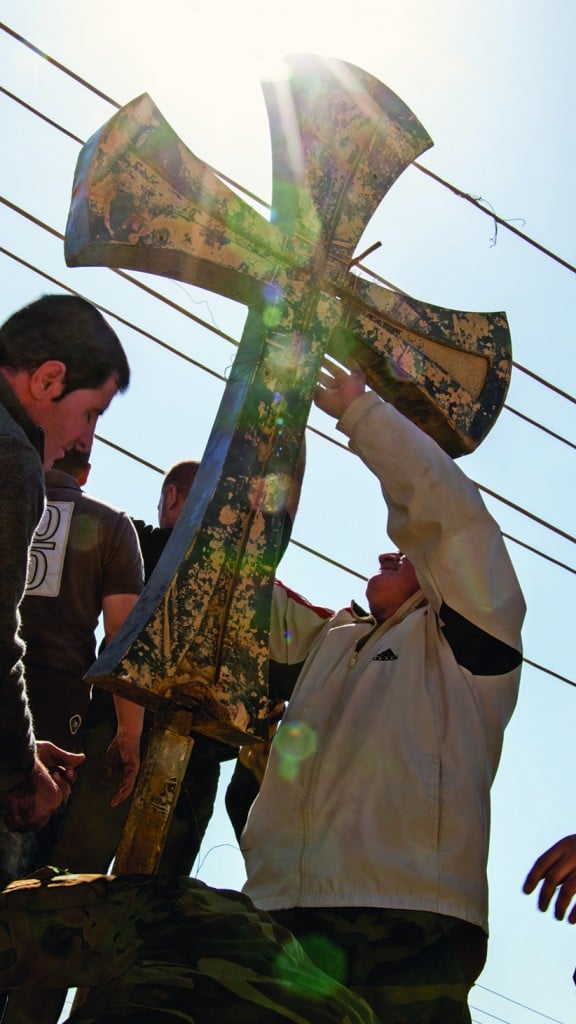 Local Christians replace the cross at the entrance to one of the churches in the predominantly Christian town of Qaraqosh. (Photograph by Adnan R. Khan)

In Qaraqosh, hatred and violence are etched into everything: the shattered buildings, splintered glass. The air is thick with the smell of violence, a rancid odour of life rotting away mixed with the sulfurous residue of gunfire.

This was once a town where Christians and Muslims lived together in relative peace and harmony. Islamic State’s only success here has been to reduce that trust to a pile of rubble alongside the towns and villages it has ravaged.

None of the nuns, despite their enduring faith, can imagine it ever being rebuilt. “In Arabic, we all use the same word for God, Allah,” says Sister Luma. “But after seeing what they have done here, how much destruction they have caused, how can you say we believe in the same God?”