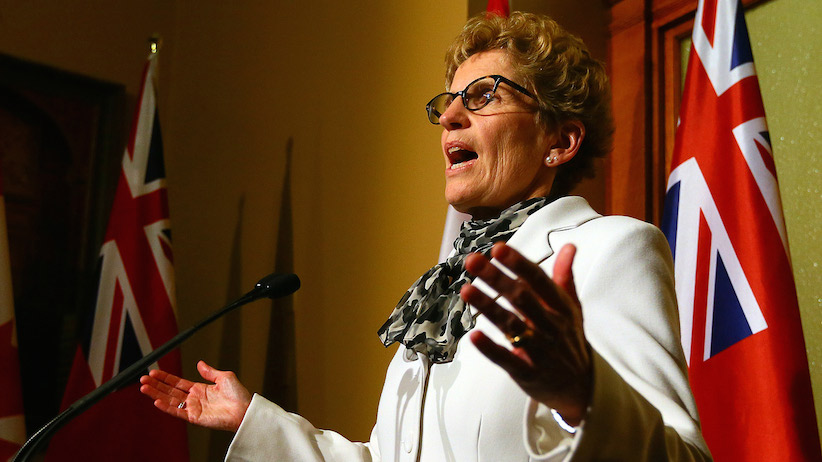 In hoping to appeal to enough leftist voters to win a majority government, Ontario Liberal Leader Kathleen Wynne has signalled that her real opponent in this election is Prime Minister Stephen Harper. That’s no small irony, given that the flagship proposal of her campaign platform—a made-in-Ontario retirement system—looks set to steal many of the federal Conservatives’ ideas on pension reform.

Since the official start of the campaign last week, Wynne has done her best to distance herself from her scandal-plagued predecessor, Dalton McGuinty, by positioning herself as the best person to defend Ontario values against a Conservative federal government backed by Western Canada and intent on harming Ontario’s interests at every turn. “In a very real way, the federal government is balancing its budget on the backs of Ontarians,” Wynne told a gathering of supporters in Ottawa earlier this week. The latest evidence Ottawa is snubbing Ontarians, Wynne told the Toronto Star, was that Harper had “smirked” at her during a December meeting in which he shot down her plan for an expanded Canada Pension Plan.

Having been rebuffed by the feds in her attempt to shore up the retirement savings of middle-class Canadians by boosting CPP contributions, Wynne has put a provincial pension at the centre of her plan to right the power imbalance between Ottawa and Ontario. A skeletal version of the Liberals’ proposed Ontario Retirement Pension Plan emerged in the budget in early May, promising a system modelled on CPP but with some very important differences that may not entirely please the left-wing flank of the Liberal base.

The plan calls for both employees and employers to pay a combined 3.8 per cent of their wages into a pension fund that ultimately aims to replace 15 per cent of workers’ pre-retirement income. In that respect, it looks like a scaled-down version of CPP, which pays out 25 per cent of pre-retirement income and is funded by contributions of workers and companies totalling 9.9 per cent of income. But significantly, the Liberals appear to be giving themselves some wiggle room when it comes to how they plan to structure the pension by saying the fund would “aim” to pay out 15 per cent of income, says Fred Vettese, chief actuary of Morneau Shepel. To a veteran actuary like Vettese, that suggests the party is looking to roll out a version of a target-benefit pension plan in which both contribution and benefit levels can change from year to year depending on whether the pension plan hits its funding targets.

Under such a plan, benefits could hit the 15 per cent target in some years, but be much smaller during an economic crisis when unemployment soars, pension contributions plummet and investment returns sour, as they did in 2008 when Canadian pensions were forced to continue paying the pre-crisis benefits even as they were losing billions. The Harper government announced last month it was pushing for Crown corporations and federally regulated companies to adopt target-benefit plans, calling them a “sustainable and flexible pension option.”

Another Ontario Liberal proposal culled directly from the Harper playbook is a proposal for Pooled Retirement Pension Plans (PRPPs), which the federal government launched in 2011. PRPPs are nearly identical to workplace group RRSPs, except that employer contributions are both voluntary and tax-free, which is why they’ve been backed by pro-business and taxpayer rights’ groups as an attractive option for companies who want to encourage employees to save without having to pay into their own workplace retirement programs. Unlike Quebec, however, which embraced PRPPs but made it so employees are automatically enrolled and then have to apply to opt out, Ontario’s proposal is entirely voluntary and has received little attention in the election so far. That seems odd, says Vettese, given the Liberals’ insistence that governments should be encouraging middle-class Canadians to save more for retirement. “They want to show voters there’s a made-in-Ontario solution,” he says. “PRPPs are the brainchild of the federal Conservative government and I don’t think they’re all that keen on having a Conservative government proposal succeed.”

The strangest aspect of Ontario’s pension plan is how it proposes to treat low-income workers. While the Liberals haven’t settled on the details for how much workers must earn before they have to start contributing to a provincial pension plan, the budget references the threshold used by CPP—which requires workers to start contributing on earnings above just $3,500 a year. Low-income Canadians are already well-served by the variety of federal programs aimed at supporting impoverished seniors, says Vettese—so much so that Canadians who make less than $25,000 a year during their working lives often end up earning more than that in retirement, meaning that they’ve been essentially forced to oversave during their working lives.

An Ontario pension that keeps the same $3,500 income threshold would have the effect of driving up retirement income so high for many low-income Ontarians that they would see some of their federal retirement benefits clawed back. For every $2 earned from an Ontario pension, Vettese says low-income retirees would stand to lose $1 in payments from the federal Guaranteed Income Supplement, a federal program aimed at boosting the income of the poorest seniors. Since money from the income supplement comes out of the federal government’s general revenue—essentially transferring money from wealthy taxpayers and businesses to poor seniors—an Ontario pension plan could ultimately mean that Ottawa gets to spend less on Ontario seniors, while the province’s poorest workers pay more.

“You’re forcing them to save money that will end up providing them with a much better standard of living when they’re retired than when they were working,” says Vettese, who nevertheless supports the Ontario provincial plan but wants to see a minimum income threshold of at least $25,000.

There are other risks associated with Ontario’s pension plan, including the worry that companies will decide to set up shop in another province to avoid having to pay into the fund. Facing a $12-billion budget deficit last year, soaring hydro rates and an export market that has yet to recover from the 2008 financial crisis, some worry Ontario’s economy can’t afford to scare off any more employers.

“A two per cent cost isn’t huge, but it could drive investment decisions,” says Paul Forestell, senior partner at HR firm Mercer Canada. While he supports expanding CPP, Forestell says forcing employers to pay into a separate provincial pension plan makes it complicated for large national employers who operate in different provinces, as well as employees who move around for work.

Meanwhile, those Ontarians old enough to be in the workforce likely won’t be seeing much in the way of benefits from any new provincial pension plan. It will be at least at 30 years before workers will see significant returns and 40 years before they’ll qualify for the full benefit. That’s cold comfort for today’s aging workers heading into retirement. But, says Vettese, the crop of workers heading into retirement today don’t really need the extra help. “There really isn’t a retirement crisis in Canada right now,” he says. “Retirees for the most part are actually doing very well.”