Talking points: A historic Grey Cup and cleaning the military up

Our short takes on the news of the week, from a historic Redblacks’ triumph to a disturbing report on sexual assault 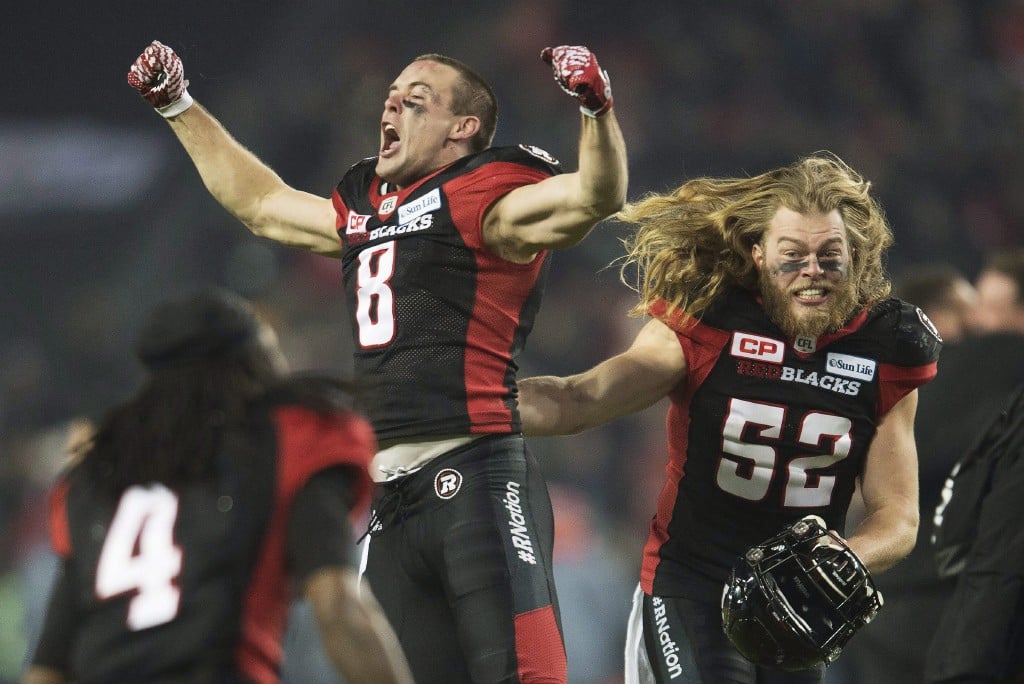 Sympathy for the wealthy

The so-called “one per cent” have been easy targets since the recession, but new numbers call for a little perspective. In Canada, the incomes of the top percentile of earners have been rising more slowly than that of others, says a Statistics Canada report, while their share of total income has fallen to its lowest point in 18 years. Their tax load, meanwhile, is growing faster on average than everyone else’s and their share of the tax burden is once more on the rise. To be clear, income disparity remains an issue in this country, and the rich need to pay their fair share. But a reckoning of sorts is under way.

It takes political courage to impose a new tax or fee on something residents have always used for free. Toronto Mayor John Tory now wants highway tolls on the Gardiner Expressway and Don Valley Parkway, two of Canada’s most sprawling de-facto parking lots. Like a carbon tax, tolls can send price signals to users of the value and social cost of becoming part of congestion. Road pricing is no cure-all for Toronto traffic or budget shortfalls, but a welcome part of the solution.

Chronic apathy in the country’s largest city toward Canadian football was proven foolish yet again on Sunday, when BMO Field hosted one of the most exciting Grey Cup matches in years. With the Ottawa Redblacks’ triumph over the heavily favoured Calgary Stampeders, the nation’s capital ended a 40-year drought marked by the folding of two franchises and much mediocrity along the way. Sunday’s classic dispelled all that. Between game-turning interceptions, veteran quarterback Henry Burris’s inspirational performance and the Stamps’ overtime-inducing comeback, the game’s thrills vastly offset the irritant of frequent challenges of officials’ non-calls. Nov. 26, 2017—in Ottawa, no less. Mark it on your calendar now, folks.

Score one for respect

Props to the Trappers baseball team of Innisfail, Alta.—newly renamed after management acknowledged that their old name, the Indians, was an affront to Indigenous people living around them. The senior AA club joins amateur sports teams in places like Swift Current, Sask., and Alvinston, Ont., who are bowing to logic that seems to have bypassed big-league franchises like the Cleveland Indians: just because you’re allowed to offend someone doesn’t mean you should.

A government offensive has led to talk of a turning point in the Syrian conflict, but the plight of those trapped amid the conflict remains as awful as ever. While the Syrian army continued its advance in Aleppo, driving rebels out of strategically important areas, there were reports of civilians eating grass and garbage to survive. The UNHCR said 250,000 people were in need of help on the city’s east side, confirming that food had run out. According to one observer, inhabitants needed aid within 10 days to ward off starvation and death from a lack of medical supplies.

A vicious cycle has long plagued Canada’s military: reports of shockingly frequent sexual assault, followed by pledges to fix it, inadequate action and, finally, more such reports. Top brass commissioned a Statistics Canada survey to put a number on it, and the results aren’t pretty: 1,000 soldiers reported being sexual assault victims in the past year—nearly double the rate of the working Canadian population. We welcome Chief of Staff Jonathan Vance’s promise of “negative consequences” for the perpetrators. But it boggles the mind that, in 2016, he felt the need to make it.

The credit-checking business is getting downright creepy, with companies now combing smartphone data to determine peoples’ loan-worthiness. According to Bloomberg, a growing number are partnering with app developers, who access the info from your telecom provider, then analyze your activity: if you talk and text with deadbeats and ne’er-do-wells, that’ll hurt your score. They do so in most cases with customers’ permission. But surely there are better measures of credit-worthiness than guilt-by-association.

When brought together on social media, people can do remarkable good. They can also unite in emphatic stupidity. The latest celebration of the inane comes from the makers of Cards Against Humanity, the popular and crude party game. To mark the excesses of Black Friday, they began pointlessly digging a massive hole in some random empty field, and would continue as long as donations kept rolling in. Their earth-moving live stream went on for four days and raised $100,000 through crowd-funding—perhaps because it’s pleasant to pretend there are zero problems in the world worthy of actual charity.