The flap over Yellowknife's flag-raising practices

At the request of Turkish Yellowknifers, the city proclaimed Oct. 29 as 'Turkish Republic Day' and raised the iconic flag outside city hall. Then complaints started rolling in. 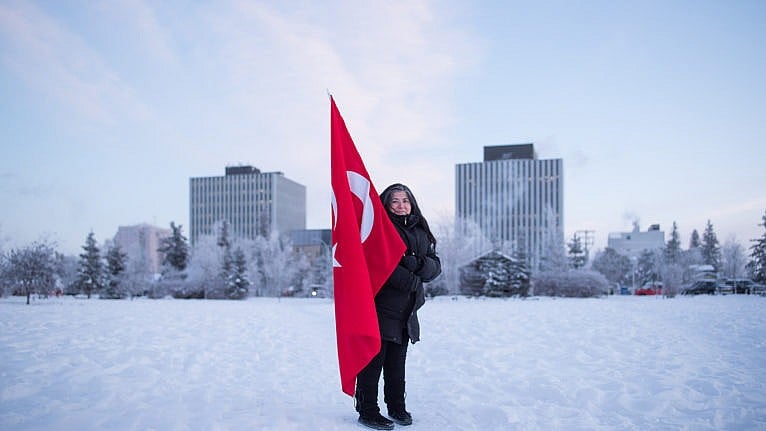 Sarikaya, a first-generation Turkish Canadian, says she is disappointed the Turkish flag will no longer be raised at Yellowknife’s city hall (Photograph by Pat Kane)

Three years ago, Yellowknife resident Reyhan Sarikaya didn’t know her city had a municipal flagpole. At least, she’d never noticed it. Then the Turkish consul general in Vancouver visited in 2017 and gifted the Northwest Territories capital a flag. A month later, at the request of Sarikaya and others, Yellowknife proclaimed Oct. 29 as “Turkish Republic Day” and raised the iconic banner—a white crescent and star on a red backdrop—outside city hall.

“I thought, what a fantastic way to share my culture and heritage,” says Sarikaya, a first-generation Turkish Canadian. “We gathered everyone with Turkish heritage in Yellowknife. We’re, what, five people?”

The gesture made Sarikaya feel recognized and appreciated, so she made a habit of requesting the flag go up on the anniversary of Turkey’s founding; the city obliged, and each Oct. 29 the coterie of Turkish Yellowknifers who gathered for the event grew by one or two. That is until last fall, when Sarikaya’s flag-raising celebration—and all others—ground to a halt, mired in sensitivities over geopolitical events that originate far from the shores of Great Slave Lake.

The previous year, as the flag had flown, some residents expressed distress to the city, recalls Shauna Morgan, a second-term city councillor. Turkey had just started a military offensive in Syria; what, they asked, was Yellowknife doing raising the country’s flag?

Yellowknife’s leaders, it goes without saying, had not intended to make a political statement. Council gets requests to make proclamations for everything from National Francophone Awareness Week to Terry Fox Day. The unofficial policy, says Morgan, was blissfully simple: “So long as they came from someone living in Yellowknife, we would grant those requests. Sometimes in conjunction with the proclamation, people would ask to have a flag raised. It might be the Pride flag or the flag for the Snowking Winter Festival.” Numerous countries have seen their flags fly outside Yellowknife city hall, including India and the Philippines.

But not everyone was interpreting the Turkish association’s request the same way, Morgan says. Some felt the city was being asked to recognize not only the importance of Turkish Canadians to life in Yellowknife, but the idea that Turkey is a peace-promoting country. The 2018 version of the proclamation stated that Turkey “has played a critical role in international efforts for peace, prosperity and stability.” Later versions were reworded to focus on the local Turkish community’s contributions.

Meanwhile, councillors were playing catch-up to learn about Turkey’s backing of Azerbaijan in an escalating military conflict with Armenia. Just weeks earlier, the Armenian community in Yellowknife had protested outside city hall to raise awareness of the conflict halfway around the world.

Council agreed to proclaim Turkish Republic Day in Yellowknife, but this time without raising the Turkish flag. “We need to find ways to celebrate cultural contributions without wading into foreign conflicts that we don’t know enough about and have no place taking a stand on,” Morgan says. “It’s not like we have any staff tasked with researching foreign affairs about conflicts that may spark if we fly this or that flag.”

So the ceremonies have gone on pause, and council is now debating whether to wave the white flag on the practice permanently. Firmly in the corner of maintaining the tradition is Rommel Silverio, Yellowknife’s first Filipino councillor. “When you raise a flag for a certain country, you don’t think of the geopolitical aspect,” he said at a recent debate. “To me, it’s the friendship of this country—and welcoming Canada for us and giving our contribution to this place.” A resident’s home country may have an unstable government, he added, but to them it’s still home. Silverio, who has supported flag-raising to commemorate Yellowknife’s Filipino Heritage Month, suggested a policy that would bar raising the flags of countries that don’t respect human rights.

Morgan counters by referencing her own time decades ago living and doing development work in the Philippines: that country, she observes, doesn’t exactly have a stellar human rights record. “But hardly any country in the world can say it has a great human rights record,” she adds. “When we fly flags of other countries that either have or are still committing human rights abuses, it’s hard to deny the symbolism of you picking the side of that national government against whoever they are persecuting.”

In the interest of finding middle ground, Morgan proposed flying flags of local cultural groups—provided they have banners that are not national flags. Either way, council hopes to have an official policy in place soon.

As for the handful of Turkish Yellowknifers who gathered annually by the flagpole, Sarikaya says they see the end of their ritual as a lost opportunity—for the city to represent them and, if anyone is offended, for a conversation toward reconciliation. “We have an amazing Turkish community here,” she says, “and we don’t represent the trauma that your ancestors or your family suffered.”

This article appears in print in the February 2021 issue of Maclean’s magazine with the headline, “Raising a red flag.” Subscribe to the monthly print magazine here.