The Justin Trudeau honeymoon is over

Editorial: Justin Trudeau was booed at the Grey Cup game. He should get used to it. 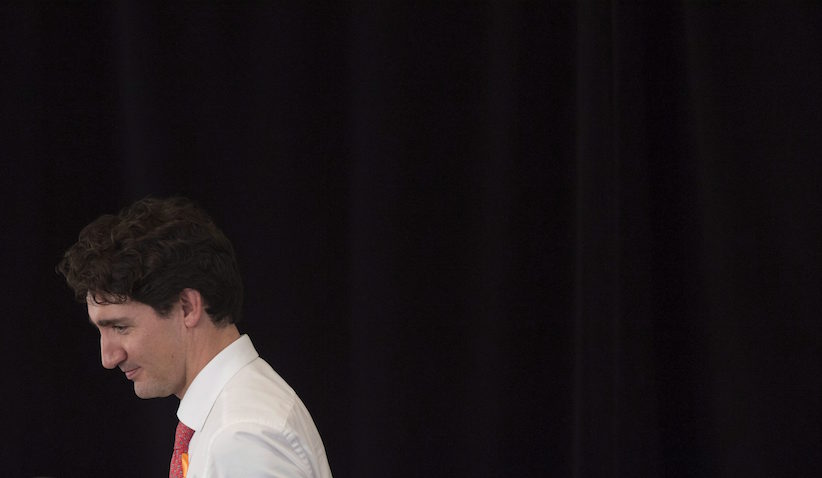 Amid the Ottawa Redblacks’ thrilling 39-33 overtime win over the Calgary Stampeders in the 104th Grey Cup this past weekend, there was a moment that seemed to unite all fans, regardless of team loyalty or level of inebriation. The appearance of Prime Minister Justin Trudeau offering a pregame greeting via video screen was immediately met with widespread, lusty and prolonged booing rendering his message entirely unintelligible. (Although “Castro was a dictator!” was heard from some corners of the stadium.)

Unlike his predecessor, former prime minister Stephen Harper—who assiduously courted the Canadian Football League crowd and attended the championship game in person wearing a Stampeders jersey—the urbane Trudeau has little obvious appeal to CFL fans and their blue-collar sensibilities; Justin Bieber got the same treatment in 2012. Yet Trudeau should prepare himself for many more “Grey Cup salutes” in the coming year. Having staked his political success on sunny optimism and emotional intelligence, Trudeau is about to face plenty of situations where no one wants a selfie.

More than just football fans have leapt to criticize Trudeau’s effusive eulogy for Cuban dictator Fidel Castro. “I know my father was very proud to call him a friend,” Trudeau said in offering his “deepest condolences to the family, friends and many, many supporters of Mr. Castro.” Such a sentiment ignores Castro’s lamentable record on human rights, as well as his role in bringing the world as close as it’s ever come to nuclear war. It is also instructive of Trudeau’s style, since it reveals his emotive instincts and desire to avoid conflict. He felt a connection with Castro and was moved to share it, as befits our social media age. But there’s more to being a leader than spreading good cheer.

Trudeau came to power last October riding a wave of optimism and the promise of change. His platform made hundreds of campaign commitments unencumbered by the hedging familiar to most politicians. He vowed a new way of doing business in Ottawa. He spent the first few months wiping away all vestiges of the previous Harper government. Then Trudeau unleashed a seemingly endless series of public consultations: a federal website currently lists 70 ongoing consultations on everything from Canada Post’s future to national security legislation to the Canada Food Guide. There is nothing wrong with asking for public input, of course, but it’s starting to feel like these consultations are just a way of delaying final decisions.

It is the nature of leadership that it is impossible to please all people all the time. Many successful leaders will say it’s often impossible to please anyone a large part of the time. This is the situation in which Trudeau finds himself on Canada’s desperate need for new pipeline capacity. As he learned this week by approving Kinder Morgan and rejecting Northern Gateway, a yea or nay on any particular project will inevitably leave large segments of either the environmental or the business community upset. These are decisions that make enemies, not friends.

A few campaign commitments have already come a cropper. The Liberal platform promised “implementation” of the United Nations Declaration on the Rights of Indigenous Peoples as a result of accepting all recommendations of the Truth and Reconciliation Commission. But doing so would give Native groups a veto over all future resource projects in Canada, something Justice Minister Jody Wilson-Raybould has admitted is “not a practical option.” And the claim that 2015 would be the last federal election held under first-past-the-post rules is looking increasingly unlikely to survive growing demands for a referendum and timing constraints.

In other cases, attempts to shoehorn government actions into the constraints of platform promises has produced such policy absurdities as the Liberals’ announcement last week that the Royal Canadian Air Force will buy 18 Super Hornet fighter jets. This stopgap measure is necessary only because Trudeau vowed never to buy the F-35 Joint Strike Fighters favoured by the Harper government. Similarly, Trudeau pulled our existing CF-18s out of the fight against Islamic State earlier this year because he said Canada should not be on the front lines. It has since emerged, however, that Canadian soldiers sent to train Kurdish forces have engaged in active firefights with the enemy. Quelle différence?

Then there’s the current cash-for-access scandal, in which Trudeau attended a $1,500-a-head private function with businessmen seeking a favourable ruling from government, which has left him looking like a run-of-the-mill politician with a hand out to wealthy supplicants.

Trudeau’s long honeymoon period is finally coming to an end. Now comes the difficult business of making hard choices, disappointing supporters and coping with the sense of cynicism that eventually settles on all politicians like so much dust. It’s not enough to be everybody’s friend; the Prime Minister needs to show he can make the tough decisions that leave plenty of folks feeling downright unsociable. It’s lonely at the top, but there’s a job to be done.