The law, the Lord and one giant cross to bear

What role would a Christian law school play in broader Canadian society? 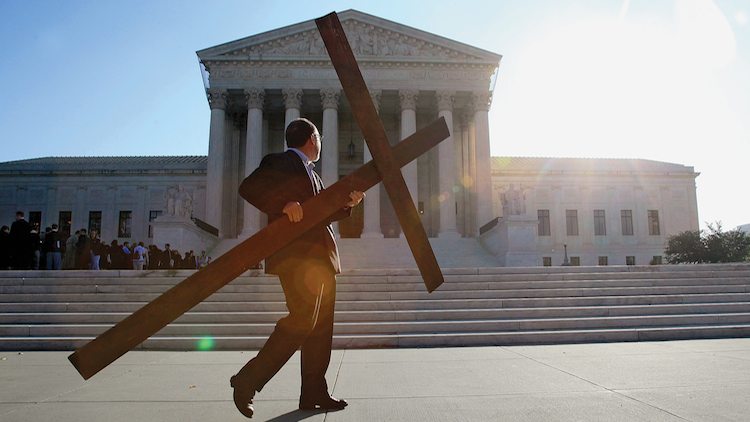 The controversy around Trinity Western University’s application to create Canada’s first private law school based on Christian foundations has centred on a covenant the school requires of its students. The school, located in Langley, B.C., mandates that its students and faculty pledge to abstain from “sexual intimacy that violates the sacredness of marriage between a man and a woman.”

While the school does not explicitly exclude gay students, the pledge has sparked accusations of discrimination. The Federation of Law Societies and B.C.’s Ministry of Higher Education has approved accreditation for the school. But provincial law societies, which set the standards for admission to the profession, are under pressure from critics to reject the school’s potential graduates.

Beyond the covenant controversy, however, the application for Canada’s first Christian law school raises another question: What role would a Christian law school play in broader Canadian society in which controversial social issues are often decided in the courts? In the U.S., a new wave of Christian law schools have become more than places to train lawyers—they are players in a growing conservative legal movement that is shaping American law and politics.

“This is a situation worth watching,” said Rob Boston, spokesman for Citizens United for the Separation of Church and State, an American advocacy and litigation group. In the U.S., he says, “the law schools and legal groups they work with have created an infrastructure to push ‘culture war’ issues in a more conservative direction.”

The new, assertive brand of politically engaged Christian law schools differ from the many private U.S. universities that had religious roots but had become secularized over time. They were conceived as gathering places and incubators for Christian legal thinkers and activists, and an integral part of the conservative legal movement that seeks out and litigates strategic cases all the way to the U.S. Supreme Court on issues including school prayer, the rights of anti-abortion protesters, gay marriage, and gun laws. The law schools were founded by deep-pocketed Christian activists who wanted to match the success of liberal groups such as the ACLU and NAACP at effecting social change through the courts.

In 1986, televangelist Pat Robertson, who headed the Christian Coalition and the Christian Broadcasting Network, launched the Regent University school of law in Virginia Beach, Va. (Motto: “Law is more than a profession. It’s a calling.”) It drew faculty such as former attorney general John Ashcroft, and produced graduates such as the two-term governor of Virginia, Bob McDonnell. At one point, Regent became a pipeline to jobs in the federal Justice Department under George W. Bush. In 1999, Tom Monaghan, the founder of the Domino’s Pizza chain, founded Ave Maria law school, now in Naples, Fla., to merge legal education with conservative Catholic teaching. In 2004, Liberty University, a Lynchburg, Va., university founded by another television preacher, Jerry Falwell, opened its own law school.

Alongside their law schools, Robertson and Falwell established public-interest law firms staffed by like-minded lawyers who launch strategic litigation. Robertson created the American Center for Law and Justice, originally housed together with Regent’s law school. Liberty University has Liberty Counsel, whose founder and chairman also serves as the dean of the law school. “There was a long-term vision: you create the law firms by cherry-picking leading Christian lawyers and then you develop the law schools with direct affiliations with the law firms—and the students can take classes from the lawyers at the firms and do internships. So you create a feeding network,” said Joshua Wilson, a political science professor at the University of Denver, who has studied the history of Christian law schools in the U.S.

Wilson traces the rise of such groups to the conservative backlash against the U.S. Supreme Court’s ruling in Roe v. Wade, the 1973 case that proclaimed a constitutional right to abortion. Evangelical Christians organized and helped elect Ronald Reagan, but were disappointed when his term in office did not affect abortion rights or school prayer. Abortion politics were driven into the streets—with activists protesting in front of clinics. “Then those people started getting arrested and needed lawyers.” Meanwhile, state government efforts to restrict abortion rights were being challenged in courts, too. “These dual pressures made Christian conservatives realize they need to develop legal resources,” said Wilson.

The movement has had an impact on secular education as well. Last year, Stanford University opened the first legal clinic in the U.S. focused on religious liberty issues, helped by large donations from conservative foundations. “The 47 per cent of the people who voted for Mitt Romney deserve a curriculum as well,” Lawrence C. Marshall, the associate dean for clinical legal education told the New York Times at the time. “We ought to be committed to ideological diversity,” he said.

In Canada, by contrast, law schools have been publicly funded and secular. Conservative legal scholars say this has bred homogeneity and conformism in thinking. “I think there is a lack of diversity in the Canadian legal academy and Canadian legal institutions and that manifests itself in all kinds of ways,” says Bradley Miller, a law professor at the University of Western Ontario. Another result has been conservative and Christian students leaving Canada for American institutions. “They go and tend to stay. We don’t tend to get folks back once they’ve made the leap. It’s a big problem,” says Ian Brodie, research director at the school of public policy at the University of Calgary, former executive director of the Conservative Party of Canada, and a former chief of staff to the prime minister.

Canadian expat Ilya Shapiro, a senior fellow in constitutional studies at Cato Institute, a libertarian think tank in Washington who was involved in the group’s legal challenges to President Barack Obama’s health care reform, agrees. “I see a lot of conservatives and libertarians from Canada here. We joke we are here for ideological exile—or at least we did before the Obama administration,” he says.

He says that the Canadian conservative movement, “could and should develop a network of like-minded students, professors, and thought leaders of various kinds.”

Janet Epp Buckingham, a political science professor at Trinity Western who is a proponent of the law school project, says she has had students leave for U.S. law schools such as Pepperdine University in California, Baylor in Texas, and Indiana’s Notre Dame in search of faith-based legal education and Christian teachings on legal ethics. “I have had quite a few express to me that there is very little room in the current secular law schools for faith and it’s not considered a serious topic for law school or even an appropriate topic for law school,” she said.

But she says those waiting for Trinity Western to take on an activist role outside the classroom along the U.S. model will be disappointed. “We are definitely not looking at engagement with culture-war-type issues—but filling needs we see in the Christian community and in the larger community around us.” Students at Trinity Western are politically diverse, and what they decide to do with their educations will be up to them, she said, but adds, “I don’t have a problem if law graduates become public interest advocates.”

Epp Buckingham toured a number of religiously affiliated U.S. law schools and “was struck by how diverse they are.” She visited Virginia’s Regent, which she described as “focused on the ‘culture wars’—but also contributing in a robust way to public discussion about the nature of law and interpretation of constitutional provisions.” Her preferred model is Campbell University, a small school in North Carolina, which she said is focused on training competent, regional lawyers. Her goal is to train lawyers to serve small communities and underserved clients.

But where does that leave a potential Canadian conservative legal movement? “Who knows what could happen,” says Miller, “When you get a critical mass of like-minded people.”