The loneliness of a losing candidate

For years, Chungsen Leung worked hard for his constituents, and hoped to win their trust again. In the end, they chose someone else. 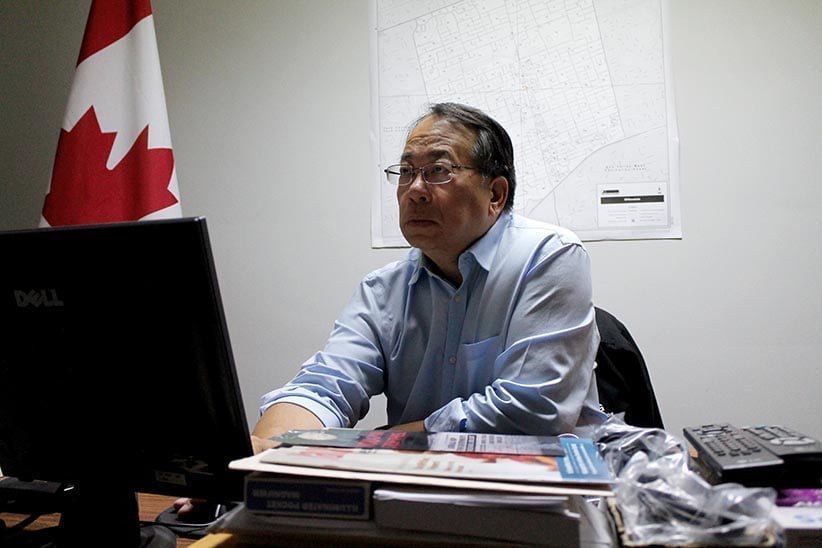 Chungsen Leung, Conservative candidate and former MP for the Toronto riding of Willowdale, watches results on election night at his campaign office. (Photograph by Meagan Campbell )

He talks to his computer in unfinished sentences. “How come CBC doesn’t . . . must’ve closed the polls . . . elected four already in Nova Scotia.” The window in the den of his Conservative campaign office is stained by boxing tape, which, hours ago, held up signs calling for his constituents to “Re-elect Chungsen Leung.” His closet is full of tumbling boxes, which look frozen in mid-collapse. The bulbs in the ceiling were supposed to get replaced, but a single spotlight is all that shines on him. He chooses a Coffee Crisp from a box of trick-or-treat candies. “Not a good idea for a borderline diabetic,” he knows at age 65, “but it only happens once every four years.”

Most of his volunteers have left him at the campaign office to scrutinize the incoming results. In the days before the election, he was trailing by about nine percentage points in the polls and had been personally door-knocking to try to change that. In his Toronto riding of Willowdale, which he first won in 2011, poll stations are mostly in condo buildings, dispersed between strips of hair salons, bubble-tea cafés and a variety of “marts.” Only a few volunteers stay back with Leung on this night, including his wife and adult daughter. The office is quiet, except for one volunteer on the phone with the scrutineers. “Just make sure no one’s up to any shenanigans,” he says.

Until moments ago, Leung himself was helping to manage every detail—like a bride who gladly deals with the garbage at her wedding. “You know what? Put it at the back of the stairwell,” Leung suggests. Someone else comes to him, looking for the white garbage bags, and he knew they were “beneath the table in front of Mitch.” In the push of election day, Leung and his volunteers are as well-coordinated as a Rube Goldberg machine. If they weren’t thanking or offering to help someone in one of four languages, they were being thanked and offered help themselves. Everyone knew where to find what they needed—a specific map, letter, flyer or set of instructions—as though these documents weren’t scattered across tables and shelves, but, rather, filed by the Dewey Decimal.

Leung clicks around on his desktop screen to watch the Maritimes turn solid red and Quebec start to bleed. “It’s depressing,” he says to no one in particular. “Megan Leslie’s down. I really liked her.” One of the few remaining volunteers pops his head into the office, offering to connect the computer to the TV and throw up the live stream on the big screen. “No, don’t throw it up,” says Leung. “Right now it’s too depressing. We have nothing, and they have 52.” Leung’s daughter jumps in: “But this is not official,” she says. “No, it’s not official,” Leung agrees, “but wait until Ontario.”

Leung’s staffers speak their minds. “Twenty-five to none in Quebec, I think,” says one. “It could be a long, empty night.” Leung zooms in and out on CBC’s map of results, until Ontario results arrive and he finally agrees to hook his computer to the TV in the lobby area. A wayward balloon sticks with static to the screen. He palms it like a basketball to remove it.

Leung watches himself lose Willowdale by 16 per cent to the Liberal candidate, Ali Ehsassi, whose name does not get spoken. He retreats to his den and, later, when being consoled by his supporters, sheds subtle tears down his cheeks. The pain is not in an uncertain future—he has a pension from his past business career—but rather in the cold bye-bye. He worked for four years for Willowdalers, paying diplomatic visits to South Korea, Israel and China, and dinnertime visits to retirement homes. He went to constituent job fairs and picnics, played bagpipes (something he started doing after a visit to Scotland with his wife) at their cultural centres, dealt with frustrating bureaucracies to help them and Canada, where he’s lived since immigrating at age 18 from Taiwan.

And then there was the campaign. He signed up for a race that guaranteed thousands of people would talk about him behind his back; he made his face vulnerable to graffiti; he canvassed sometimes seven days a week, snacking instead of sitting down for meals and brushing his teeth at the campaign office with a travel-sized brush and toothpaste tube. He didn’t just build his campaign, but kept on top of every minute detail. He knew where the white garbage bags were.

And now, his friends have fired him, to be replaced with somebody else.

Team members have returned to the office, and one is too upset to stay. Volunteers turn off the television shortly after the Liberal majority is called. “It’s so quiet in here,” says his wife. In a few minutes, Leung will have to give statements to video cameras and journalists, repeating himself for each of the Mandarin and Cantonese newspapers. Within two days, he’ll be moved out of his constituency office. Within three, he’ll be out of this one. But, for the time being, he emerges from his den for a moment, just to tell the crowd to eat.