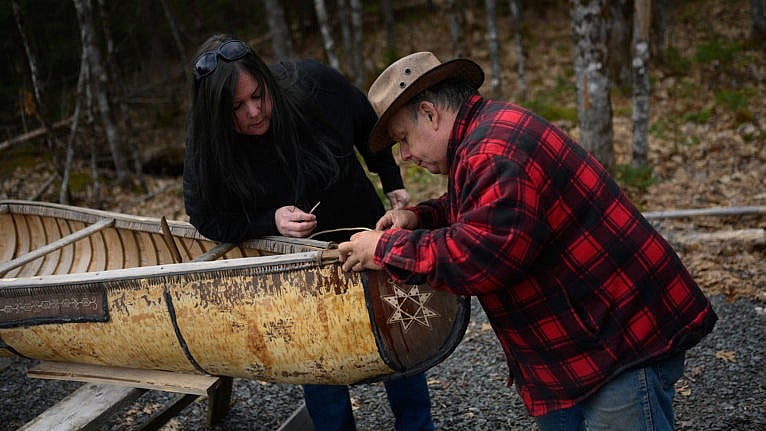 Mi’kmaq Elder Labrador (right) and his daughter, Melissa, repair a traditional birchbark canoe at his home in Conquerall Bank, N.S.(Photograph by Darren Calabrese)

In 2017, Mi’kmaq Elder Todd Labrador came to Lunenburg to give a class on drum making at the invitation of Wilfred Moore, a retired Liberal senator who established the Bluenose II Preservation Trust.

Moore did not know then that one of Labrador’s ancestors had a hand in the construction of the pride of Lunenburg, the Bluenose, the Grand Banks schooner that brought enduring fame and pride to this fishing town on Nova Scotia’s south shore. He merely enjoyed watching the drum come together, marvelling as Labrador stretched wet skins over yellow cedar hoops he’d harvested and tied them with sinew he’d brought with him.

Later, Moore learned that Labrador’s great-grandfather, Joe Jeremy, made similar, sturdier hoops—these ones out of oak—that once attached the enormous sails to the towering masts of the Bluenose, the fishing vessel launched here in 1921. “It’s like, from drum hoops to mast hoops, it continues, right?” says the former senator. “It’s working with the craft and knowing what materials to harvest, and how to treat them and steam them and round them.”

Labrador was in Lunenburg on March 26 for the 100th anniversary of the launch, a tiny, unofficial gathering in the Grand Banker Bar & Grill, overlooking the harbour that is still home to the Bluenose II and other wooden sailing vessels. Because of COVID, organizers did a virtual event, with a video featuring the Prime Minister and other dignitaries, along with Labrador, who spoke about his great-grandfather, highlighting for the first time the Mi’kmaq role in the story.

“He would make birchbark canoes, baskets, axe handles, but he also made mast hoops,” Labrador said in an interview after the event. “He would cut big oak trees out with an axe and a neighbour would haul them out with his ox team. Great-grandfather would cut them apart and my father would help them steam them.”

Jeremy sold the mast hoops to Angus Walters, the skipper who built the Bluenose and won global fame by defeating all comers in a series of races that set a benchmark for seamanship in the last days of the age of sail. The hoops that fasten the mainsail to the boom come under tremendous force in a blow. “Massive horsepower,” says Phil Watson, captain of the replica Bluenose II. “The mainsail alone is 4,100 square feet. If you put that in terms of a 4,100-sq.-foot house, you start to get an idea of how big it is.”

From 1921 to 1938, the Bluenose represented Canada in races for the International Fisherman’s Cup, a trophy established by the Dennis family of Halifax to be contested by fishing schooners whose crews were accustomed to risking their lives in the Grand Banks cod grounds. The races, which made front-page news around the world, were marked by a fierce and not always good-natured rivalry—a contrast with the genteel world of America’s Cup racing. Rival skippers would try to win by forcing their competitors onto the rocks, leading to deliberate collisions in heavy seas, which both crews would accept without protest.

The Bluenose won every race, defeating contenders built by the best shipyards in Nova Scotia and Massachusetts expressly for the purpose of beating her. The repeated victories were a source of pride for Lunenburg, partly because so many people had a hand in them: owners, carpenters, sailmakers, crew members, their families. The construction, maintenance, outfitting and crewing of a 143-foot sailing vessel was a community effort. The Bluenose’s victories were rightly celebrated as a reflection of the skill and seamanship of her home port. But the Mi’kmaq contribution to that effort is only now being recognized. 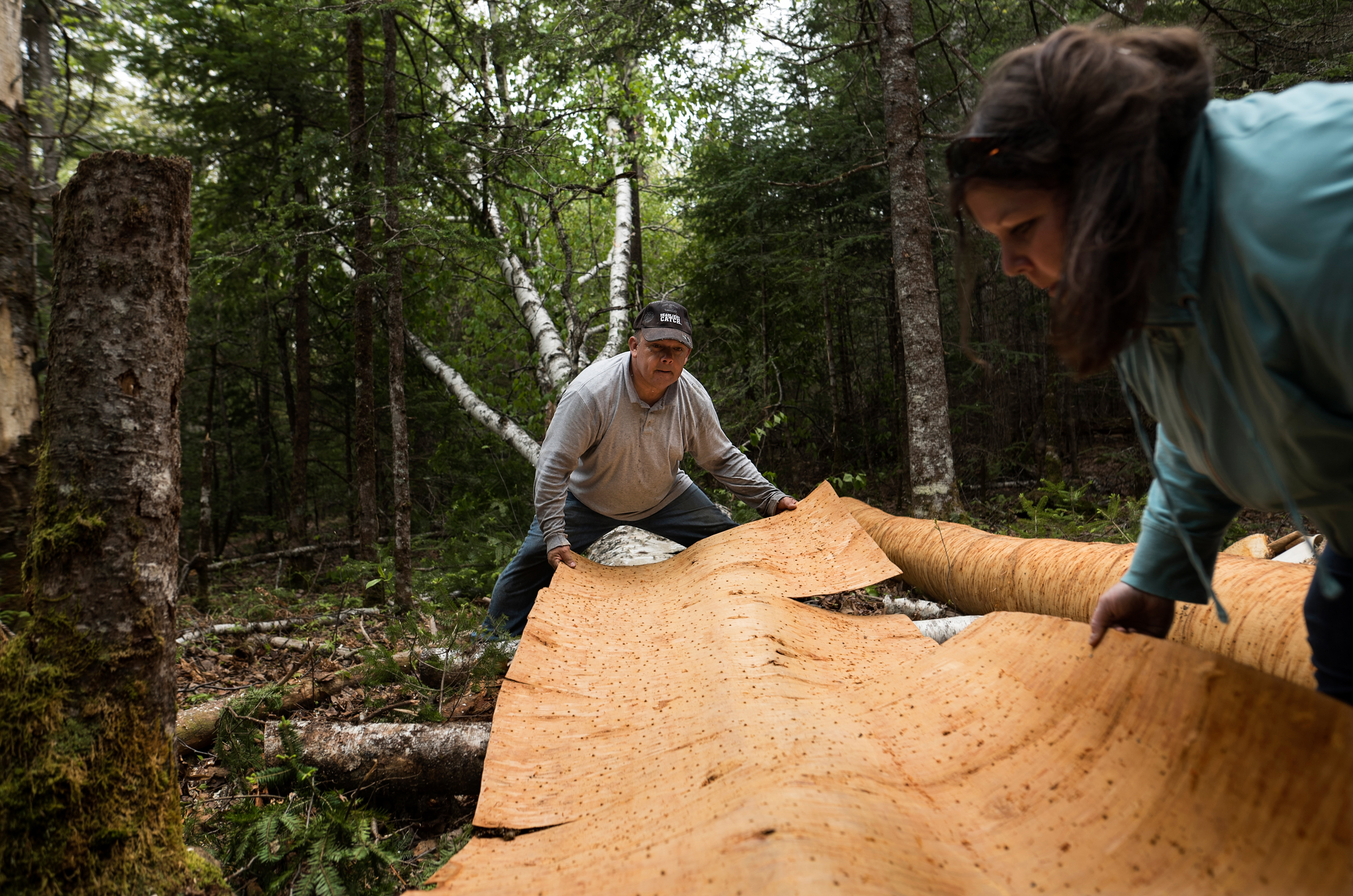 Labrador rolling up a length of birchbark with Melissa (Darren Calabrese)

Todd Labrador, meanwhile, will build a birchbark canoe this autumn during a residency at the Lunenburg School of the Arts—the first time such a boat has been made here in memory, and likely since the British arrived in the 1750s. He and his daughter, Melissa, are dedicated to maintaining woodworking knowledge handed down through the family.

That knowledge still exists because Jeremy, who made the mast hoops, prevented his grandson, Charlie Labrador, from being sent to the residential school in Shubenacadie, where many Mi’kmaq children were abused. When officials came to take the kids away, Jeremy would send them to hide in the woods.

So Charlie was able to stay among his people, absorbing traditional knowledge. Like his grandfather, he made his living trapping and making baskets from black ash splints, an ancient craft still practised throughout Mi’kma’ki, the traditional territory of the Mi’kmaq. Labrador was the founding chief of the Acadia First Nation and a repository of traditional knowledge. 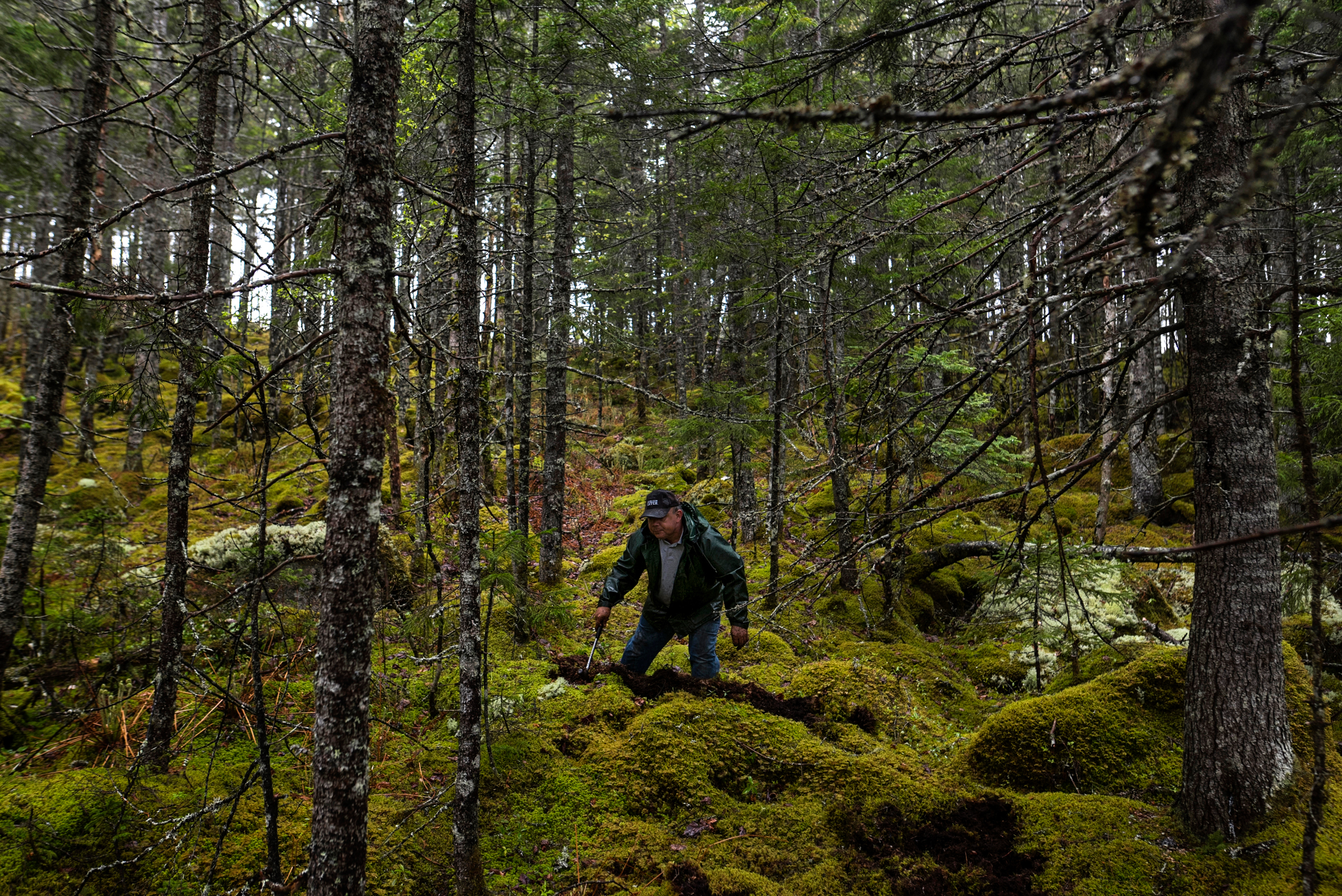 Melissa Labrador, Todd’s daughter, says her grandfather had a deep knowledge of the properties of wood that was inseparable from his understanding of the natural world: “You understood the trees and materials that worked, right? It’s just innate. It’s not something you necessarily learn over and over and over, but it’s in your blood.”

For her father, there’s special meaning in making a birchbark canoe in Lunenburg, a UNESCO World Heritage site that attracts people from around the world. “It’s going to be quite a highlight of my life to build a canoe in Lunenburg,” he says. Labrador hopes to eventually paddle one of his canoes alongside the Bluenose II in the town’s picturesque harbour, and get photos of the boats travelling side by side.

“That,” agrees Watson, the schooner’s captain, “would be amazing.”

This article appears in print in the June 2021 issue of Maclean’s magazine with the headline, “Restoring a piece of history.” Subscribe to the monthly print magazine here.