The moment gravel was thrown at Trudeau by a protestor

Election Image of the Day: Stones were thrown at the Prime Minister during a rowdy campaign stop 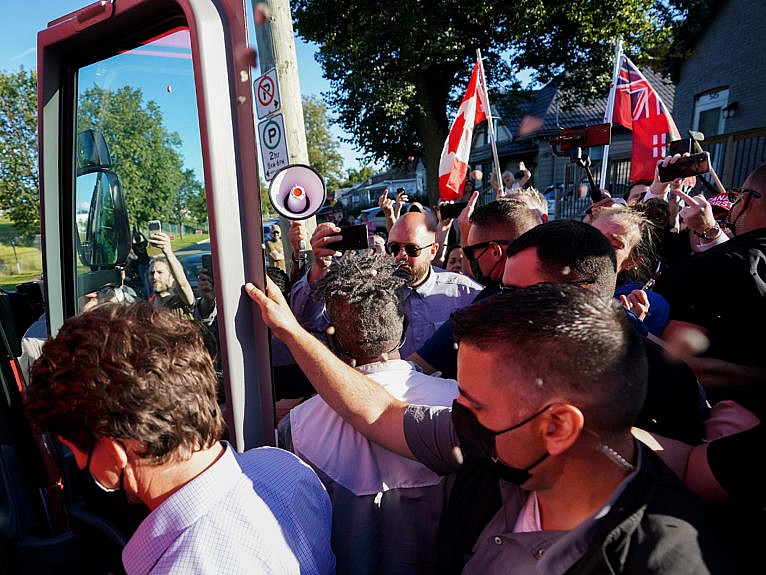 Gravel is thrown at Liberal leader Justin Trudeau, left, as the RCMP security detail provide protection, while protesters shout at a local microbrewery during the Canadian federal election campaign in London Ont., on Sept. 6, 2021. (Nathan Denette/CP)

The gravel rained down on Justin Trudeau like manna from heaven. For weeks, the Prime Minister has been in a tailspin, unable to articulate why he called an election and struggling to define the core issue to be decided at the ballot box. He has consequently been flailing, with those daily red poll numbers taking a nosedive. For lack of a central message, the Liberals have tried the bogeyman approach, portraying Conservative leader Erin O’Toole as a destroyer of health care, friend to anti-vaxxers and champion of guns—but none of that has quite stuck. Enter the gravel. These nameless, faceless protesters, some of them brandishing banners of the People’s Party of Canada, have emerged as the perfect foils for the Liberal leader. On Monday, when one of them threw some gravel at Trudeau, they granted him the opportunity to look stalwart and sympathetic—a victim in the face of unprovoked aggression. He expertly spun this point the next day at a press conference, citing supporters, volunteers, police, journalists and health-care workers who have faced similarly loud and angry anti-vax protests . “Those are the people I want to defend,” he proclaimed. One person’s gravel is another person’s political gold.