Plus a week in the life of Lubna Ahmed al-Hussein 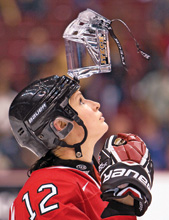 Face of the week
Team Canada’s Meaghan Mikkelson (Right) reflects on a 2-1 loss to the U.S. after the gold medal game at the Hockey Canada Cup

A week in the life of Lubna Ahmed al-Hussein
Like most career women, the outspoken Sudanese journalist puts her trousers on one leg at a time. But under the laws of Sudan, those trousers on a woman are “indecent.” She was found guilty Monday, and, while spared a lashing, fined $200. She was imprisoned after refusing to pay, only to be released Tuesday, against her wishes, when the journalists’ union paid the fine. “I am not happy,” she said, since thousands of other women have not been spared punishment.

On guard for thee
It’s often hard to know how successful the “war on terror” is, but the conviction of three British men who plotted in 2006 to blow up seven airplanes using liquid explosives smuggled in soft drink bottles is evidence of the vigilance of those charged with keeping us safe. The decision marks the end of one of the biggest counterterrorism efforts in the U.K., and an ordeal that triggered heightened airport security measures worldwide. In Canada, at least one rule is being relaxed. Security agents have been told not to ask passengers to take their shoes off anymore, unless they set off hand-held metal detectors. It seems we can all breathe a little easier when we travel.

Hall of honour
In May, Faron Hall jumped into Winnipeg’s icy Red River and saved a drowning teen. Hall, who was homeless at the time, became a reluctant hero and was awarded a medal of valour by the mayor. This week, the 44-year-old did it again, diving into the river to help two drowning friends. Sadly, he was only able to save one of them. Hall has shunned attention again, and says he feels like he let people down. The group had been drinking when they went into the river. But no matter what the circumstances, he risked his life for another. That he has done it twice affirms he really is a hero.

Settling the score
A month ago, star CFL receiver Arland Bruce III was unceremoniously dumped by the Toronto Argonauts and sent to the Hamilton Tiger-Cats after a falling out with new coach Bart Andrus. In this week’s Labour Day classic, the two teams met and Bruce caught six passes in a 34-15 drubbing of his former team. The Argos haven’t won a game since the trade and now it’s Andrus who’s in the hot seat and at risk of losing his job. Bruce has had a lot to say about his parting with the Argos, so it was refreshing to see him show, on the field this time, why he is one of the game’s most exciting players.

Twist and shout
The flutter of media reports heralding three major releases by the Fab Four this week is but a faint echo of the madness marking their appearance on The Ed Sullivan Show some—good heavens!—45 years ago. Here’s a chance for the iPod generation to sense what the excitement was about. Just out is the video game Beatles: Rock Band. Also released are two massive boxed CD sets—one in stereo and the other in the original mono. Mono, for those who’ve never heard of Ed Sullivan, is what used to come out of the single speaker on records and transistor radios. Please don’t ask what those are, suddenly we’re feeling old.

This dog won’t run
The cross-country bus trip may soon be a thing of the past as Greyhound Canada has threatened to cease operations in Manitoba and northwestern Ontario. The company blames government regulations requiring it to offer money-losing service to rural areas in exchange for monopolies on lucrative routes. To keep this system running, Greyhound is demanding $15 million a year from federal taxpayers. In other words, the proposed solution to over-regulation is subsidization and further government involvement. A better idea would be to deregulate the industry and let bus companies compete amongst themselves.

Sneaking a smoke
One in five cigarettes smoked by Canadian teens is contraband, says a troubling study in the Canadian Medical Association Journal. The journal says the untaxed, unregulated smokes undermine youth tobacco-control strategies. The contraband rate is even higher in Central Canada, where First Nations territories like Akwesasne, on the Quebec-Ontario-U.S. border, are a major source. The problem isn’t limited to Canada. One-third of all smokes in Malaysia are either smuggled or fake. And in Poland, border officials found thousands of cigarettes being smuggled into the country in an ambulance. At least the crooks have a healthy sense of irony.

Phoenix rising
What more can Jim Balsillie possibly do? Determined to bring NHL hockey to Hamilton, the BlackBerry billionaire has sweetened his offer for the Phoenix Coyotes by US$30 million, to US$242.5 million. He is even including hefty compensation—as much as US$50 million—for the taxpayers of Glendale, Ariz. The NHL’s counter-offer pales in comparison, yet the league is still threatening a lengthy court battle if Balsillie’s bid wins out. It seems commissioner Gary Bettman would rather see a franchise flounder in the desert than thrive where it belongs: north of the border. Keep up the good fight, Mr. Balsillie. The real fans are rooting for you.

Read me
If you can’t read this sentence, you’re not alone. According to staggering new statistics, one in five adults around the world are illiterate, and nearly half of all Canadian adults don’t have the basic reading skills to comprehend what’s written on a bus schedule or a pill bottle. The next generation will be no better off. A separate study has found that 30 per cent of Grade 6 students are destined to drop out of high school because they can barely read or write.