Newsmakers 2012: A year of trouble at sea 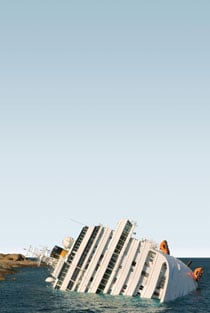 In a combination of idiocy and breathtaking hubris, captain Francesco Schettino steered the Costa Concordia close to the Italian island of Isola del Giglio for a so-called “near-shore salute.” The Concordia hit a reef and capsized, and 32 of the 4,252 people aboard died in the ensuing chaos. Worse still: Schettino abandoned the ship early, claiming he “fell” into a lifeboat.

More than 700 passengers on three ships reported un-cruise-like bouts of diarrhea and vomiting over one February weekend. The cause was norovirus, which is typically spread through ingesting contaminated food or water. The departure of Royal Caribbean’s Voyager of the Seas was delayed as 200 of its passengers were quarantined, while two other ships, the Ruby Princess and Crown Princess, were forced back to port after noro-virus outbreaks. LadrÓns with cojones Speaking of un-cruise-like behaviour, 22 passengers of the Panama-flagged Carnival Splendor were robbed at gunpoint during a day trip in Puerto Vallarta, Mexico. Bandits relieved passengers, who were on a bus on their way back from a nature tour, of their money, watches and passports. Two weeks before, the U.S. State Department had issued a travel advisory warning Americans of the dangers of travelling to 14 Mexican states, including Jalisco, where Puerto Vallarta is located.

A 47-year-old Canadian woman disappeared from the decks of the Bahamas Celebration while the mid-sized cruise ship made the voyage from the Bahamas to Florida. The woman, whose name wasn’t released, was last seen by her boyfriend; he alerted the crew several hours later, after she didn’t return to her cabin to sleep. The U.S. Coast Guard searched some 19,000 sq. km of ocean before calling off the search.

The 79-foot Baranof Wind is a high-speed catamaran that navigates the waters of Alaska’s Glacier Bay National Park, billed as one of the “last unspoiled destinations in the American Northwest.” Seventy-two of its passengers got a close-up of nature when the ship ran aground and took on water in August. Luckily, the 1,440-passenger cruise ship MS Volendam was nearby and scooped up the sightseers.

Edmund Cabot was a surgeon, but his life’s passion was sailing. So much so, in fact, that the 69-year-old Boston native spent the last seven summers sailing around the world. Cabot had a soft spot for Canada’s Atlantic provinces—he sometimes worked in Labrador—and it was 16 km off the coast of Stephenville, Nfld., on the last leg of his trip, where a rogue wave knocked him into the ocean. The body of the father of four was recovered by a search helicopter the next day.

Rescuers found the body of an unnamed British woman who had fallen overboard from the MV Aurora during a 14-night cruise in the Mediterranean. No one knows exactly how she fell to her death, but fellow passengers reported waters were quite choppy at the time. It is believed the 72-year-old woman was on the trip with her daughter when she disappeared on the Oporto-to-Barcelona leg of the journey.

Cruise out of control

Thirty-seven people aboard a pleasure cruise circling the waters of Hong Kong’s Victoria Harbour died when a passenger ferry collided with their single-hulled vessel on Oct. 1. The dead were all from Hong Kong Electric, and were celebrating a company event in one of the world’s busiest (and safest) ports when the accident occurred.

Tragedy on the bounty

The HMS Bounty was a Nova Scotia-built replica of the famed ship featured in Mutiny on the Bounty. The three-masted vessel, featured in the 1962 film, was off the coast of North Carolina when it encountered the wrath of hurricane Sandy. The ship sunk, killing two of the 16 crew, including captain Robin Walbridge. In a TV interview this summer, the captain said he liked to chase hurricanes, but his wife said he was just being “cute.” She said he wouldn’t have sailed if he thought it wasn’t safe. The U.S. Coast Guard is investigating the cause of the sinking.