Image of the Week

Image of the Week: The owner of a wrecked shop refused to take part in Trump's photo-op as the president used the riots to further inflame divisions rather than heal. Team Trump just found someone else to do the job. 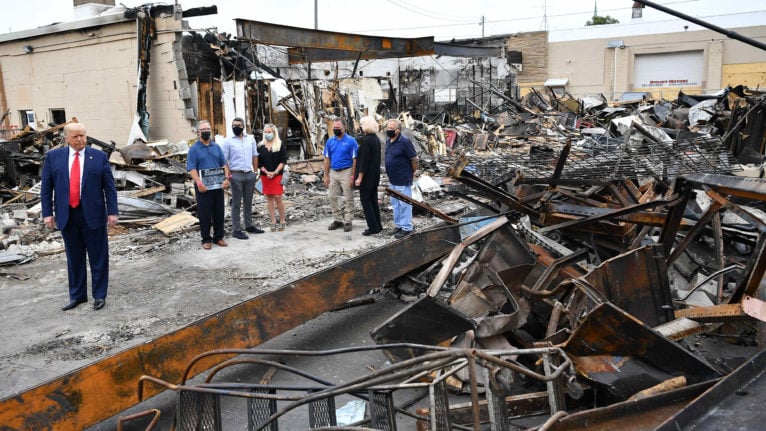 Grief takes many forms. If a member of your family was shot seven times in the back and permanently paralyzed from the waist down, and this needless altercation further inflamed anti-racism riots that had been persisting for months, you may be inclined to calm the national tension and spread a little peace and optimism with open-air dance parties, voter registration booths and free food. If you’re President Donald Trump, on the other hand, your reaction to the latest escalation of American division would not be to cool heated emotions, but to capitalize on them. Earlier this week, Trump headed to Kenosha, Wis., where Jacob Blake, an unarmed Black man, was shot and rioters subsequently burned the city’s downtown in anger. Trump loudly cast blame upon everyone but himself. He denied the existence of systemic racism in police forces and accused Democrats of hampering law enforcement. He ostensibly sided with local business owners, but when he reached out to the owner of a 109-year-old photography shop that burned down during the protests, the owner refused to take part in Trump’s circus; instead, Trump’s team asked the former owner to stand beside the president, who erroneously referred to him as the current owner, victimizing him to justify his talking points. This absurd manipulation of reality, blending fact with fiction, perfectly encapsulates this president’s political perversion. As Trump surveyed the wreckage of downtown Kenosha, it was hard to ignore the metaphor: a country literally ravaged by division and racism, looked upon by a lethally passive leader who prefers taking sides to healing divides.