Waiting for death in Thunder Bay

A trailer hitch thrown from a passing car left Barb Kentner facing death, and her daughter contemplating life without her 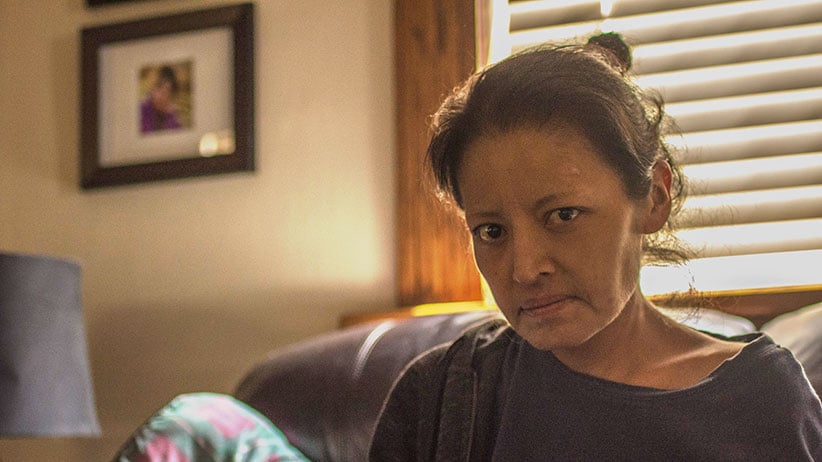 An update on this story: Barb Kentner died July 4, 2017 at 5 a.m., surrounded by her family, at St. Joseph’s, a Thunder Bay hospice. In November 2017, Brayden Bushby’s charges were upgraded to second-degree murder, then downgraded to manslaughter in September 2020. Bushby’s trial began on November 2, 2020, when he pleaded guilty to aggravated assault and not guilty to manslaughter.

Barb Kentner wants a Big Mac. For the past two days, she has been lying in Thunder Bay Regional Hospital, periodically thinking of eating one last burger. In late January, the Anishinaabe woman was hit in the stomach by a rusting trailer hitch in Thunder Bay’s east end, in an unprovoked assault. It was hurled at her from a moving vehicle. “I got one,” someone is alleged to have yelled from the car as it peeled off into the night. She has been in and out of the hospital ever since.

Doctors have told Barb, a member of the Waabigon Saaga’igan Anishinaabeg (Wabigoon Lake Ojibway Nation), that she will not live much longer. Her liver has ceased functioning. Nothing more can be done; so they try to keep her comfortable. If the cold that had taken her to hospital three days earlier worsens to pneumonia, her death could come in a matter of hours. She is 34 years old.

When doctors delivered the news, Barb immediately called her 16-year-old daughter, Serena, her only child, whom she raised on her own. They are close—more like best friends than mother and daughter. Barb asked her daughter to prepare for the worst.

Serena’s friends will tell you she never cries. She’s tough as nails—a straight-A student with a head for science and math and dreams of becoming a doctor. She had to grow up fast when her mom’s drinking—her “disease,” Serena calls it, never faulting her for her struggles—took control two years ago. When her mom called, she dropped the phone without hanging up or saying goodbye. Then she walked outside and started to scream.

There were four people, all under 20, in the passing car that night: three men and one woman. Only one of them, Brayden Bushby, 18, has been charged. With Barb’s death looming, her family wants to know whether Bushby’s aggravated assault charge will be upgraded to manslaughter, or even attempted murder, when she dies.

The attack happened around 1 a.m., on Jan. 29; Barb was walking with her sister Melissa, older by three years. They were on McKenzie Street, headed to a relative’s home. Indigenous women in the city are wary of that stretch of road, where sex workers are known to await customers. Like Serena, many are afraid to walk it. Serena says men in cars used to pull up alongside her. Some propositioned her. Some would follow behind at a slow pace. Whenever that happened, she would tear off, running for safety, her heart pounding in her throat.

Just before Barb was hit, Melissa remembers walking past a car idling on the corner. Suddenly it turned, speeding toward them. A man hung out the passenger side window on the –20 degree night. Before Melissa understood what was happening, it was all over. Hearing a clanging noise, she turned to see Barb bent over in pain. The sound was the heavy hitch hitting pavement after bouncing off her sister.

Doctors did what they could for Barb over the course of a five-hour emergency surgery to repair her small intestine, ruptured by the trailer hitch; but bacteria was “everywhere,” and it soon began attacking Barb’s organs, says Melissa. Barb had earlier been diagnosed with liver disease, but was healthy at the time, according to her sister.

She stood 5-6 and weighed 200 pounds before the assault; she has lost 70 pounds since. “She was so big and strong,” says Serena. “Now I’m scared to lie beside her to cuddle her. I’m scared I’m going to hurt her.” After being hit by the hitch, Barb quit drinking in hopes of making the six-month wait that would allow her name to be added to the liver transplant list. So far, she has survived five months. But there is no hope of a transplant anymore: she is too sick.

Barb and Melissa are the eldest of four Thunder Bay-raised girls born to hard-working parents. Their dad, Roy, a member of the Nizaatikoong (or Lac des Mille Lacs) First Nation, grew up in Upsala, Ont., because the reserve did not have housing for members. He was a truck driver, who had been sexually and physically abused as a boy at residential school. He used alcohol to numb his torment. Melissa says he tended to discipline his daughters the same way the priests had. “He didn’t know how to show affection,” she says. “He knew how to hit, though.”

Barb and Melissa grew close when their dad died of a heart attack in 2002. Their youngest sister was 14 at the time. Their mom, Mildred, who was fighting cancer, died two years later. She was 43. Barb and Melissa stepped up, helped care for their sisters, Cheryl and Connie; Serena was still in diapers at the time.

RELATED: Welcome to Winnipeg, where Canada’s racism problem is at its worst

The day Barb was struck by the hitch, Serena was at a three-day leadership camp in Ottawa: “I didn’t want to believe it,” she says. “I couldn’t.” The accident derailed her studies, forcing her to miss the last three months of high school, which she was trying to finish in two years. She had to pull out of an event at Edmonton City Hall she had been chosen to emcee. “Everything was going so great,” Serena says, drifting off. “It all feels like a dream,” she adds, shaking off the tears pooling in her eyes. “One day, I’m going to wake up and my mom is going to be gone.”

When her mom struggled with an alcohol addiction, it was Serena who cared for her. Every night before going to sleep, she would go out and find her, bring her home and put her to bed. When addictions eventually overwhelmed their family, it was Serena, then 14, who recognized they could no longer cope, and phoned social services, reporting herself. For the past two years she has lived with a relative in Edmonton. The plan was for Barb to stop drinking then move to the city so they could be together. It was all they ever talked about.

Serena says she can talk to her mom about “anything.” And she spoiled her when she could. When Serena was nine, Barb took her and two friends to Canada’s Wonderland, near Toronto. They saw Niagara Falls, where Barb bought her a Build-A-Bear—her prized possession. (The bear was lost a few years later when a landlord kicked them out of their apartment, tossing it in the garbage along with the rest of their belongings.)

Barb has managed to take Serena out twice since the incident, both times to the movies. They saw Logan, the final instalment of the Wolverine trilogy, and the latest offering from the Fast and Furious franchise. Barb, who needs constant rest, slept through both.

Serena blames herself for what’s happened: “I left my mom here by herself,” she says, staring at her pink and white runners. “I should never have left. I know I could have saved her.” She is planning to buy a Build-A-Bear to remember her.

Once, before her mom’s alcoholism took over, they fought on a Thunder Bay sidewalk. Serena had been helping her mom limit her alcohol intake by giving her a daily allowance. That day, Barb wanted more. Serena refused to hand over the family bank card. A passerby shot video of the resulting fight. It was posted to the now-defunct website Thunder Bay Dirty, where some Thunder Bayites posted cruel pictures of Indigenous men and women, many of them battling homelessness and addiction. Serena’s video was titled “Zombies Fighting on Brodie Street.”

Both Melissa and Serena have had objects or obscenities hurled at them from cars. To them, racism is commonplace. That doesn’t mean they understand it. “Everyone is the same colour underneath,” says Melissa. She is wearing a black ball cap and baggy, grey sweats; she’s a tough, brash woman with a cackle for a laugh. Growing up, she fought any boy who dared call her a “dirty Indian.” There was only one slur that stung, she says—squaw. “God, I hate that word.”

What Serena wants now, more than anything, is to break the cycle of hurt and addiction that has taken so much from her family.

She has been called hateful names. She has been followed by security in malls and drug stores, made to feel like a prisoner in her own city. As a teen, she was taunted and laughed at on a racist website. Six months later, the Thunder Bay city police, responding to a noise complaint, handcuffed her arms behind her back, throwing her into the back of a cruiser. The cuffs were so tight they bit into her wrists, causing excruciating pain. When Serena tried to alert an officer, he and his partner laughed; one called her “stupid.” She had done nothing wrong.

Serena is 16 now. She spends her days in a small, tidy, shared room on the third floor of Thunder Bay Regional Hospital, watching her mom, one of the city’s most vulnerable residents, die after a man allegedly targeted her with a trailer hitch.

Barb’s eyes are closed now. Her once thick, black hair, which falls out in clumps whenever Melissa bathes her, is tied neatly in a ponytail. It never had the chance to go grey. Patches of her scalp are visible in places. Her cheeks have hollowed. Black circles shadow her eyes. Her arms are like twigs, sticking out of a white t-shirt which tents around her waist. She can no longer walk. Since her liver stopped processing fluids, her legs have ballooned. There are blisters on the soles of her feet, where fluids have tried to force their way out.

In the end, she didn’t manage to get a single bite of the Big Mac down. She can barely hold the heavy burger, which she holds awkwardly at an angle, the sauce pooling on her leg. It hurts to speak, but she wants it known she is stone cold sober. It’s her body failing her, she says—this is no “buzz.” She may be losing the battle, but her dignity remains intact. “It’s over,” she says. That doesn’t mean she’s not scared of dying. She’s terrified.

“We’ll be here,” her gruff, older sister says, her voice suddenly quiet. “You’re not going to feel anything. You’re going to fall asleep. You won’t have any pain anymore.”

Barb’s cheek rests gently against a feather-soft, white teddy, one of three stuffed animals in the bed with her: These days, even pillows cause Barb pain. She’s stuck a large, square bandage to the teddy bear’s stomach, the same place she was struck by the hitch. Melissa covers her with a blanket. For the next two hours, she moans while she naps. Serena never leaves her side.

“I’m scared,” Barb said before drifting off. “I’m so scared.”