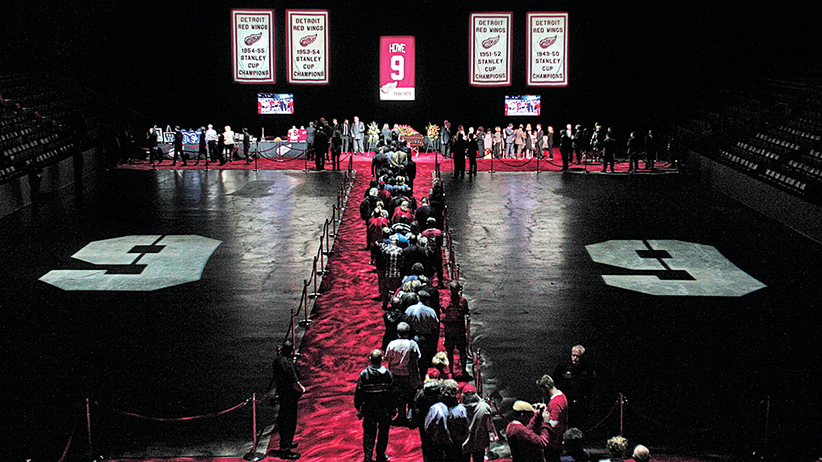 In memory of Gordon Howe, who died last week of old age, rusted blades and a broken heart, 92-year-old Mary Kordie of Wayne, Mich., was being rolled toward the Joe Louis Arena in Detroit in a wheelchair and a frisky mood.

It was a little after eight on Tuesday morning. A brisk wind, denying June, was blowing north across the Donald Trump Wall from Windsor, Ont., and hundreds of other, younger, men and women were bundled against the chill, waiting for the doors to open.

Inside the hushed and darkened rink, a closed casket held the remains of the fallen hockey giant, weighted by a forest of Wing-Red roses and attended by three shaken sons and a daughter who will find themselves suddenly fatherless—this is the cut that cannot be stitched—come Fathers Day.

The next morning, Howe was to be remembered at church by the pantheon of his balletic and ballistic sport, and his body consigned to the flames of remembrance in a cremation to rival Sam McGee’s in the mythic memory of his nation across the stream. But outside the Joe, on this unseasonable morning, there was laughter, and community, and pride.

“Did you ever date a hockey player?” Kordie was asked. She had been a Red Wings fan since antiquity, and Howe had been her—and everyone else’s—Caesar. (Mary was in her early 20s when he broke in, back in ’46, and a grandmother when he finally retired, 30-plus years later.)

“Which one?” the old girl replied, and buckled with laughter.

Kordie’s daughters were with her, and a grandson, too, all of them big Red Wings boosters, all of them harbouring sweet, personal memories of moments spent—off the ice—with Howe, who never saw himself as too all-starry to consort with common people; who never lost his inner Saskatoon.

The talk was of how few sweet moments anyone ever spent with Gordie Howe on the ice. A reporter remembered Mark Howe saying of his father, “My Dad won’t like me saying this, but he was the most cruel hockey player I ever saw. Vicious. Absolutely nasty. Hurting people—maybe that’s what makes a great athlete, the willingness to do anything to win.”

“Is that how you will remember Gordie Howe?” Kordie’s daughter, Patricia Hermatz, was asked. “As big and mean and cruel?”

“I’m just glad he was ours,” she responded.

There was a big sheaf of white paper taped to the arena, and people were stopping to write on it:

“ ‘Mr. Hockey’—little did you know you were my ‘currency’ for my son—every time he did something questionable, I’d say, ‘Ryan, what would Gordie Howe think of that?’ ”

And: “I never knew my grandfather, except that he had an undying love for ‘Mr. Hockey’ and the Red Wings. This instilled the love and passion in me. And for this I thank you.”

A Michigander named Hank Forys, like many others, stood in the queue in a No.9 jersey personally autographed by Gordie and Mark Howe. He recalled talking to Mark one day about fathers and fatherhood.

“There were only two Dads,” Hank Forys remembered saying. “There was my Dad, and there was your Dad.”

That Howe lived to the age of 88 was testimony to the skill of hockey’s leather-satchelled sawbones, back in the six-team days, to his own frostproof Prairie rootstock, and to the devotion of a daughter and three sons who clutched at every medical moonbeam as he declined and, by doing so, may have gained him years of life, and years for them with him.

But it also was possible to look back 12 years to the time when Colleen Joffa Howe—Howe’s wife, manager, encourager and lifelong, ardent flame—was diagnosed with the rare and devastating form of dementia known as Pick’s disease, and to see this as a blow from which no man, not even No. 9, Gordie Howe, could recover.

“I had a lot of knocks,” a reporter remembered him telling an audience at a corporate dinner in 2003, choking back tears. “And this is the biggest one I ever had.”

“A promise made is a debt unpaid, and the trail has its own stern code,” Robert W. Service wrote, and this is how hockey was to Howe, who could remember his childhood as “One pair of pants, one shirt, nine kids, a father on a tractor,” and who never could forget a slash, a slight, a stick to a teammate’s skin. He repaid those promissory notes in episodes of retributive violence, and skated away. Yet he, too, was just a man.

“On the ice, we always called him Gordie,” Mark Howe once said. “But when he was hurt, we called him Dad.”

On Tuesday, there was another mourner in the shadows of the Joe Louis Arena, a 55-year-old Canadian who remembered skating against Howe when he was 17 and the man he long had idolized was grey and so arthritic that he couldn’t grasp his stick with his right—his power—hand.

“When we were skating around in warm-ups, he kept winking at me,” the rival recalled—it was Wayne Gretzky. “Then, on the third or fourth shift, I took the puck from him. He came back and whacked me on the glove so hard, I thought he broke my wrist. And he said, ‘Never take the puck away from me again.’ ”

Gretzky remembered being so enthralled at such a young age that he would ask for a Gordie Howe haircut, yet the source of this fealty—a hockey card? a signed stick?—was beyond his recollection. It just as easily could have been Hull or Orr or Mahovlich or Mikita or any other of the Saturday-night demigods who skated across the CBC.

What would follow, of course, would become part of hockey’s, and of Canada’s, folk history: the famous photograph of Howe with a hockey stick tucked around 11-year-old Wayne’s neck at a father-son dinner in Brantford, Ont.; the unattainable statistics amassed by the old man and shattered by the young one—“In some ways I was embarrassed to be breaking his records, but he always said it was just a number”—the bond that would place Gretzky at the side of Howe’s coffin on Tuesday in Detroit not for a bow, or a prayer, or a moment, but for 12 full hours.

“He would have stayed for me,” Gretzky said, and he remembered a Kinsmen dinner in Saskatoon about five years ago, and going back to the hotel together afterward, and that, said Gretzky, “was really the last time that he was Gordie Howe.”