Were Edmonton police delaying bail-hearing paperwork to watch the Oilers?

An affidavit filed in court strongly suggests it, as the province defends itself against claims it’s been holding suspects too long without giving them a shot at bail 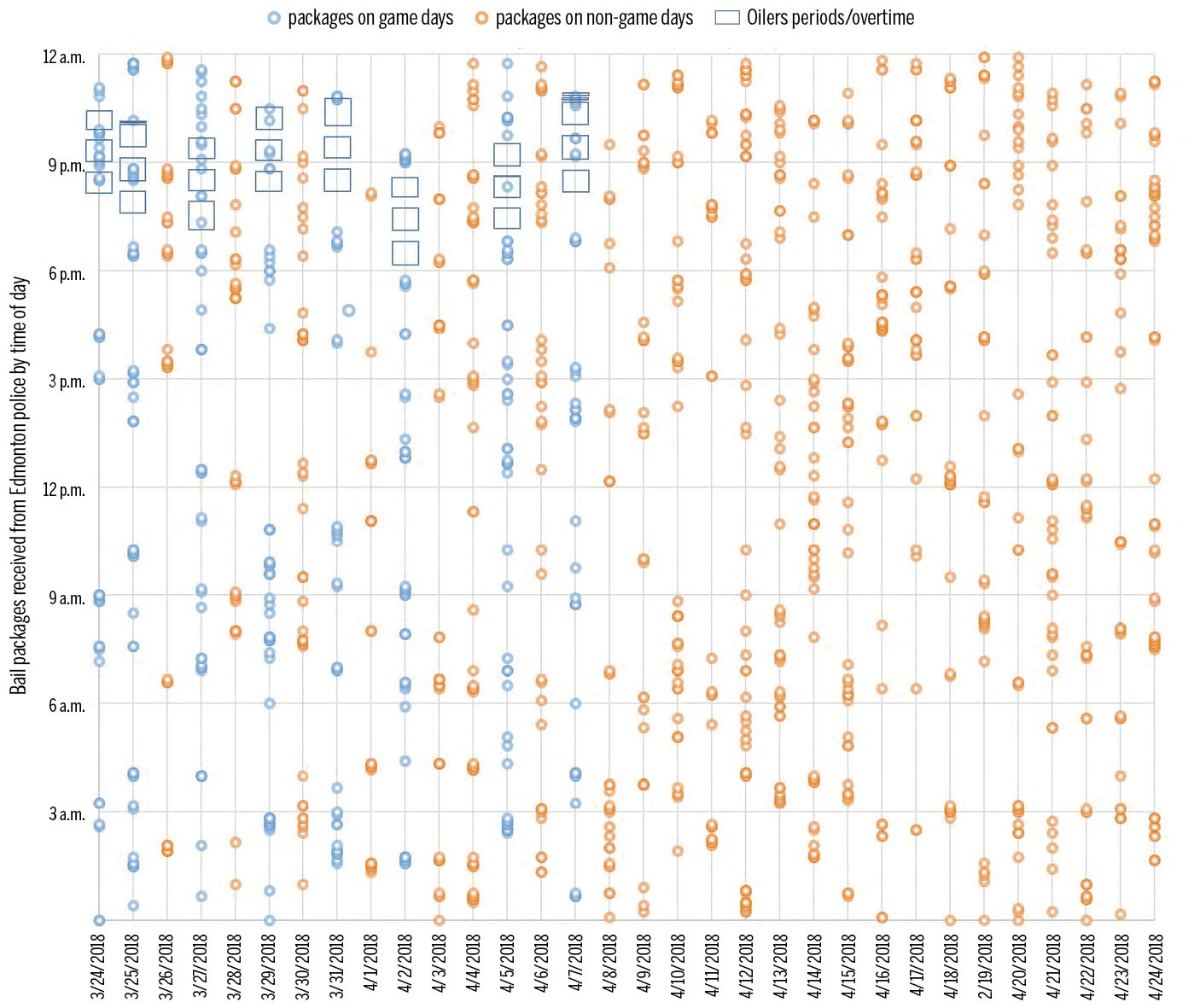 It was a typical bummer of a Sunday night game for the 2017-18 Edmonton Oilers: build a comfortable lead into the third period against the playoff-bound Anaheim Ducks, then blow it and let in the game-winner in overtime. It was March 25, and the team was already mathematically eliminated from the post-season, but a city of diehard hockey fans remained hooked.

That included, it is alleged, staff at the Edmonton Police Service (EPS) downtown division responsible for processing accused people awaiting bail hearings. For each arrest, officials must submit to the Alberta Crown bail office (CBO) a package including the offence summary, arrest report, warrants and other particulars to get the wheels of justice turning. The Criminal Code requires a detainee’s hearing to occur within 24 hours of arrest. Police from around Alberta electronically file these reports throughout the day and night—it’s part of the around-the-clock nature of police work.

On this night, according to data recently filed in a court case, a few electronic bail packages came in from the Edmonton police during the second period of the Oilers game, but none through the third period or overtime. One came in just after the game ended at 10:07 p.m.

The same went for the third period of the previous night’s game between Edmonton and the Los Angeles Kings, an Oilers victory punctuated by two Connor McDavid goals: no packages from Edmonton over the final 20 minutes of play. A week later, two entire games—both Oiler losses—went by without bail packages being sent from Edmonton. Then, after the final buzzer of each game, several were transmitted within a matter of minutes.

READ: The case for police reform in the style of 1820s London

This fine-grain analysis of when Edmonton police submitted bail documents, overlaid with Oilers games, comes in filings of a proposed class action lawsuit on behalf of accused criminals in Alberta who were held for unjustly long periods without bail. Detainees wait longer than 24 hours so regularly that the provincial justice system has jargon for these instances—“over-holds.” There were 4,854 over-holds in 2019, amounting to 11 per cent of all arrests in Alberta. The class action’s lead plaintiff, Ryan Reilly, was held by Edmonton police in 2017 on domestic violence charges for about 36 hours before his bail hearing. This fall, the Supreme Court unanimously granted him a stay of proceedings, agreeing with the trial judge that the over-hold was contrary to the Criminal Code, a violation of Reilly’s Charter rights and “an instance of a systemic and ongoing problem that was not being satisfactorily addressed.”

It’s not the plaintiff of this suit, though, suggesting that Oilers fandom accounts for some of the delays. It’s the defendant—the Alberta government. In an affidavit filed in October that attempts to explain the moving parts that must align to meet the 24-hour requirement, assistant chief Crown prosecutor Travis Stang singles out the provincial capital’s police force as a challenging partner in these efforts.

READ: The Edmonton Oilers, and the art of falling apart

Stang was wrong in saying the relevant games were playoff contests (he is based, incidentally, in Calgary). But his office has otherwise done its homework, submitting as a court exhibit a graphic showing when packages were uploaded to the bail office and when Edmonton game periods fell in late March and April. The data points are shown in Oilers team colours: blue for packages on game days, copper for days when there are no such potential distractions.

Edmonton police flatly deny any connection between televised hockey and its document submissions. “The EPS firmly rejects the assertion made by Mr. Stang, and finds it to be unfounded,” spokeswoman Carolin Maran told Maclean’s in a written statement. She argues that the graphic actually suggests the same. Edmonton’s department did file bail packages throughout some of the Oilers’ contests, including in the lead-up to the shootout conclusion of the Oilers’ April 7 season finale against the Vancouver Canucks. The graphic does not, in itself, prove a link between over-holds and the delay of bail-package submissions during hockey games. And there are long stretches shown with no bail uploads from Edmonton on non-game days, though Stang’s affidavit singles out no other particular factor.

Alberta’s justice ministry declined to comment, citing the ongoing litigation. But the government’s statistics do show that Edmonton police are comparatively tardy when it comes to bail hearings: its 11.6 per cent rate for over-holds is more than twice that of Calgary, and worse than the average for Alberta’s smaller urban police forces.

The province’s problem with delayed bail hearings had grown dramatically since 2016, when after a review, it ended the questionable practice of police officers serving as prosecution in the hearings. The delays violate the rights of people who at that early stage of proceedings are presumed innocent, says John Kingman Phillips, a lawyer for the class action, which is scheduled for hearing in March: “You wind up having a culture of disregard for breaches of the liberty of the detainees.” Pointing to the Crown’s alleged link to hockey game timing, Phillips adds: “The breach winds up almost becoming cavalier.”

Both the Crown and Edmonton police say myriad factors affect the timeliness of bail, from the number of charges to the availability of justices of the peace, prosecutors and duty counsel who represent detainees. The province has convened a multi-party committee to work toward streamlining the process, while the Edmonton police are part of a new protocol that aims to ensure all bail hearings occur by the 20-hour mark.

The efforts show promise. Data included in Stang’s affidavit indicate that in the first 25 weeks of 2020, Edmonton police were in breach of the bail timing rule in just 3.4 per cent of their cases, sharply below previous rates. Those data do not, however, cover the pandemic-delayed resumption to the NHL season and playoffs.

This article appears in print in the February 2021 issue of Maclean’s magazine with the headline, “Going into overtime.” Subscribe to the monthly print magazine here.