Why Orlando is a watershed moment

To be queer or trans, even today, is to understand that safety is not guaranteed. Orlando drives the point home. 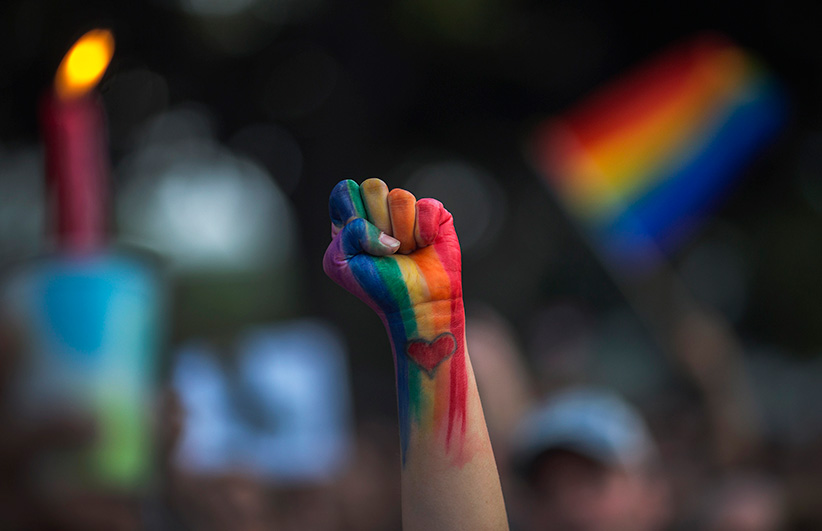 A defiant fist is raised at a vigil for the worst mass shooing in United States history on June 13, 2016 in Los Angeles, United States. (David McNew/Getty Images)

As glasses clinked, a bassline throbbed, and Saturday night gave way to the bleary hours of Sunday morning, Omar Mateen gunned down dozens inside Orlando’s Pulse nightclub. In the wake of that massacre, the shooter’s actions have been attributed to everything from violent Islamic extremism to homophobia to—after allegations that Mateen was himself a Pulse regular and used gay hook-up apps—plain old-fashioned self-loathing.

Politicians and pundits have seized on the tragedy, using it, by turns, to stoke Islamophobia or underscore the need for stricter gun-control laws. On social media, posters have transformed their profile photos into rainbow flags to show solidarity, shared #loveislove hashtags, and retweeted lists of the victims’ names and ages. There’s “shock and disbelief” about the slaughter; there are “thoughts and prayers” sent to the friends and families of those who died.

Amid all that, amid the frantic search for meaning and motivation in the face of extraordinary violence, the LGBTQ community let out a collective sigh. For us, the massacre in Orlando carries with it a heartbreaking sense of familiarity. That’s true, certainly, in a country where there’s at least one mass shooting every day, but it has a different weight within the LGBTQ community. To be queer or trans, even today, is to understand that safety is not guaranteed, even in spaces you’d think are safe.

Orlando just drives the point home. And whatever its catalyst, it’s an event that connects us with the lived experience of so many queer and trans folks around the globe: for LGBTQ communities in Jamaica, Iraq, Nigeria, Russia, persecution—even mortal danger—is a fact of life. Earlier this week, a gay couple in Russia was arrested for placing a tribute to Orlando victims outside the U.S. embassy.

Orlando is also a watershed moment for a generation that has grown up gay without the spectre of mass death. Three decades ago, the gay men who are now in their 50s watched their lovers, their brothers, their friends be decimated by AIDS. For years, parents wept when their sons came out to them, convinced homosexuality was defined by contracting—and inevitably dying from—the disease. For the queer and trans kids coming of age in Canada and the United States today, though, the Orlando attack may be the first time they’ve grappled with this magnitude of loss within their own community. Of Mateen’s 49 victims, 25 were under the age of 30. That means that more than half of those beautiful boys (and a few girls) were part of the first post-AIDS generation, a cohort who has grown up without the sense their sexuality signified a death sentence. For young queers, the trauma casts a shadow on “being yourself”: sexual identity becomes both more ominous and more urgent, and instantly politicized.

There’s a particular significance to the fact that Mateen targeted a gay nightclub. The story of gay resistance is the story of gay nightclubs and bars. Like so many who came before them, the men and women at the Pulse club came together to dance. Queer communities create our own havens to find a sense of comfort, solidarity and celebration, to combat the hostility we encounter in the rest of the world. And again and again, those havens have been raided and ransacked. It happened at Stonewall in 1969 and at the Toronto bathhouse raids in 1981: each was a private social space where people expressed identities that couldn’t be safely expressed in public. Each event turned into a galvanizing moment.

North America has made tremendous strides since Stonewall: nearly half a century later, Ontario is celebrating its first full Pride month. In May, 47 years after his father’s actions officially decriminalized homosexuality, Prime Minister Justin Trudeau announced that he was introducing a bill to ensure that the rights of transgender Canadians are protected. There’s been enough progress that year after year, the LGBTQ community revisits the same debates over whether there’s still a need for Pride. Or, more incisively, whether today’s Pride celebrations, so bombastic and corporate and flamboyant and bacchanalian—floats full of gyrating hardbodies in gold lamé sponsored by bottled-water companies; bank-branded, rainbow-emblazoned temporary tattoos—have become utterly disconnected from their radical roots.

Orlando tells another story. More than 48 hours after the fact, the governor of Florida still refused to utter the word “gay” in conjunction with the tragedy. Lawmakers and talk-show panellists have gone out of their way to characterize what happened in Orlando as anything but a homophobic hate crime. Whatever potent brew of ideological dogma, toxic masculinity and mental illness fomented such a deep sense of loathing in Omar Mateen that he was driven to slaughter strangers in a queer space, it’s a reminder that, for many of us, the party is inherently political.

That’s why, while so many well-meaning allies united behind #loveislove—a hashtag that’s irksome in its quiet complacency; it’s tacit acceptance, not celebration—some queers tweeted about shouting and dancing and holding one another close. For a community that’s been driven underground for so long, taking up public space is everything. On Monday, the executive director of Toronto Pride outlined his plans for ramped-up security measures; on Tuesday, it was reported that an anonymous poster issued threats against the Toronto parade on a German-language Islamic State fan channel. Many will likely still take to the streets and march, even when doing so makes us exposed, visible targets.