Why the swastika can't be rehabilitated

Hitler co-opted a symbol that, for Canada's growing South Asian population, stands for good fortune and well-being. Redeeming it has proven difficult. 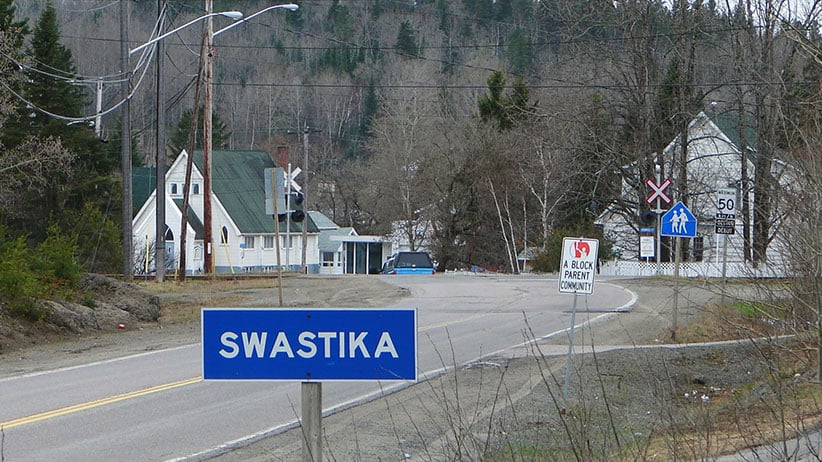 Even after the war, residents of Swastika, Ont., refused to change the name of their village (P199/Wikimedia Commons)

There’s a certain feeling Corey Fleischer gets from blasting his power washer at a graffitied surface and watching the paint of a swastika melt away. “It kind of—” he says, pausing to find the words, “it’s a euphoric feeling. It’s like a drug.”

Over the last seven years, Fleischer has become the go-to man for Montrealers wishing to get swastikas and other offensive imagery erased from public and private property. When he got a call in mid-August about two ship anchors that served as decorations in a park outside the city, each embossed with a swastika, he knew he was about to get his fix. His moment of bliss was interrupted, however, when the town’s mayor and a team of police officers showed up to shoo him away from the artifacts, but not before he took his power washer to one of the anchors.

Those swastikas, it turns out, had no connection to Nazis or anti-Semitism. They were from English ships that long predated the Second World War. Fleischer didn’t know that at first because the anchors were mislabeled. Had he known, he says he would have erased them anyway.

On the heels of controversy surrounding confederate statues in parks, the anchor incident raises another question about public displays of potentially offensive imagery. Specifically: Is the swastika acceptable when taken out of the context of white supremacy?

Before the Nazis co-opted the swastika as the banner under which they triggered a devastating world war and killed 11 million people, the symbol of South Asian origin existed for millennia as a sign of good fortune and well-being. By the early 20th century, western cultures were embracing the swastika, too. It became a popular emblem on sports jerseys; Canada was home to both the Windsor Swastikas in Nova Scotia and the Fernie Swastikas in B.C. (both teams disbanded before Second World War). In 1906, a northern Ontario town was named Swastika, which the provincial government tried renaming during Second World War, mounting a new sign for the town of “Winston,” as in Churchill. But the residents resisted, reinstalling a new Swastika sign with the message: “To hell with Hitler, we came up with our name first.” The name hasn’t changed to this day.

The community, now part of Kirkland Lake, Ont., is a social outlier with regard to the swastika. Today, you can’t utter the words Nazi or Hitler or the Holocaust in the West without conjuring images of the hooked cross, and vice versa. The swastika is indelibly linked to anti-Semitism and racism in general. It’s why people are shocked, if not offended, by a town named Swastika, even if it has nothing to do with Nazis. But in the decades since the war, there have been a number of fringe attempts to reclaim the swastika as the auspicious symbol it was, and still is, in many cultures. The late Canadian artist who went by the name ManWoman was a fierce advocate of the non-Nazi swastika. He sported over 200 tattoos of the symbol and wrote a book titled Gentle Swastika. In 2013, tattoo artists around the world organized a Learn to Love the Swastika campaign by offering free swastika ink to raise awareness about the icon’s history. This year marked the 8th annual International Swastika Rehabilitation Day. And in New York, Buddhist priest Toshikazu Kenjitsu Nakagaki was recently on the speaking circuit promoting his new self-published book The Buddhist Swastika and Hitler’s Cross, and making the case for the symbol’s revival.

To date, none of these efforts has taken hold. “Symbols take on cultural meaning based on their social context,” says Christopher Todd Beer, a sociology professor at Lake Forest College near Chicago. “When Hitler’s Third Reich used the swastika, it became embedded in our collective memory to mean white supremacy. In the western world,” he continues, “there’s not enough memory of the swastika as a symbol with any other meanings for anyone to reclaim it and have it be widely accepted.”

There is, however, a growing South Asian population in the West with a wholly different collective memory around the swastika. The most recent census data shows that 1.6 million Canadians are of South Asian descent. And close to 900,000 people in Canada identify as Buddhist, Jain or Hindu—three religions wherein the swastika features prominently.

RELATED: The push to erase Canada’s racist past

Bhaskaranand Sharma is a Hindu priest at a 50-year-old temple in a west-end Toronto neighbourhood. Above his front door, on a duplex across the street from the temple, is an eye-catching black swastika. “It’s good luck,” Sharma says in broken English, gesturing to the symbol before heading into the temple. Inside the house of prayer, there’s a wall dedicated to shrines to various Hindu gods. Above them hangs an orange banner with a repeating swastika motif. “The swastika is for Ganesha,” says Sharma, showing me to the first, most distinguished statue in the room. Ganesha, recognizable by its elephant head, is widely viewed in Hinduism as the remover of obstacles; the bringer of good luck and prosperity. It’s often the first god worshipped at the beginning of a ceremony or prayer, sometimes by drawing a swastika. Sonia Singh, a member of the temple, tells me it’s common for Hindus to have a swastika above their front door—even in Canada. She has one similar to Sharma’s on her home. For the most part, Singh says neighbours understand that the symbol has nothing to do with anti-Semitism or hate. When anyone does ask, she simply tells them it’s a peaceful sign of worship. “Most people understand when I explain it,” she says. 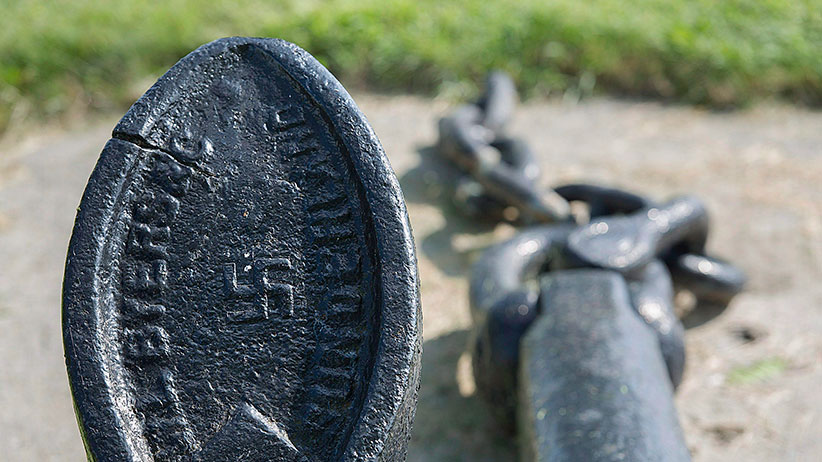 An anchor with a swastika in a park in Pointe-des-Cascades, Que., west of Montreal (Graham Hughes/CP)

Fleischer, the Montreal man who removes hateful graffiti, can’t say for sure if he’s ever erased a Hindu or Buddhist swastika. “But I probably would if I saw one,” he says, adding the caveat that he does think there’s a place for the swastika as a religious symbol; just not in public space. Beer is sympathetic to the impulse. “I don’t think people in the West hold any ambiguity about its meaning,” he says, implying that a Hindu swastika out of context, for example, still implies white supremacy. And when so-called white nationalists, like the ones at the rally in Charlottesville, use the symbol as a emblem for their cause, that association with racism is reinforced. Re-appropriating the swastika isn’t going to happen soon, he says.

“And why should we bother,” adds Rudhramoorthy Cheran, a Sri Lankan-born Tamil poet and sociology professor at the University of Windsor. “Appearance isn’t what matters; substance is what matters,” he says. “As long as we can have the substance without this particular appearance, it’s fine.”