Will this flu season be worse than usual?

Vaxx Populi: In 2020-21, Canada saw just 69 confirmed cases of influenza. Some experts worry we may have lower immunity to the flu, after nearly two years of social distancing. 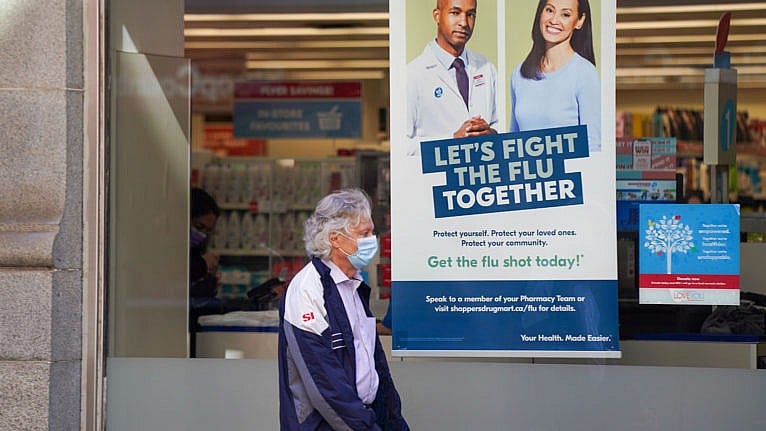 A pedestrian walks by a sign in a store window encouraging people to receive a seasonal flu shot in Toronto on Tuesday, October 19, 2021. THE CANADIAN PRESS/Evan Buhler

The email from FluWatchers arrives in my inbox every Tuesday morning, asking me to click through to a Health Canada website to answer two questions: have I had 1) a fever or 2) a cough in the past week? The entire process takes five seconds. I’m one of tens of thousands of volunteers from across the country who answer that brief weekly survey (depending on answers, there may be a few more queries), a low-tech but key part of the national flu surveillance system.

For those who shrug off influenza as nothing more than a bad cold, consider this data from Statistics Canada: Between 2015 and 2019, on average, “influenza and pneumonia” was the sixth-leading cause of death in the country, killing an estimated 7,333 Canadians annually. Like COVID, it hits the most vulnerable hardest, yet it is also capricious, striking the young and healthy as well.

Every flu season starts with uncertainty. As the vaccine is reformulated annually, depending on flu strains that are expected to dominate, it can take months of real-world data before experts can determine its effectiveness. In 2019-20, the last year for which there is large amounts of data, the flu shot offered “moderate protection for influenza A(H1N1), at 43 per cent, and good protection against influenza A(H3N2) and influenza B, at 50 per cent and 65 per cent, respectively,” Health Canada reported.

RELATED: COVID vaccines for children are almost here. How well have we protected the kids so far?

The 2019-20 season ended “abruptly,” eight weeks earlier than normal, in late March 2020, Health Canada reported. The cause was the closing of schools and businesses as well as people staying home at the start of the pandemic. “All of our measures against COVID squashed influenza,” says Dr. Jeff Kwong, a professor of family medicine and public health at the University of Toronto

The 2020-21 season was even more unusual because of “very low influenza circulation,” Health Canada reported. By the very tail end of the flu year, only 69 cases of influenza had been confirmed in laboratories, a precipitous decline from “the past six seasons where an average of 52,169 influenza detections were reported.”

There are concerns that the coming cold and flu season may be more “normal.” Vaccines mean people are mingling in ways that were unthinkable a year ago. Schools are back in session, and in many provinces, indoor dining is returning to full capacity. And that means people have a lot more opportunities to pass viruses to each other, including the flu.

RELATED: How do I get my vaccine passport? Where will I need to show it?

“As COVID-19 containment measures are relaxed around the world, cases of other respiratory viruses whose activity was suppressed under COVID-19 measures in 2020-21 have started to make a resurgence,” noted authors of a pre-print study that modelled what the flu season could be like in the United States for the Centers for Disease Control and Prevention (CDC). They point to Western Australia, which found cases of the respiratory syncytial virus (RSV) among children to be much higher than previous seasonal peaks after the nation relaxed its social distancing measures. And the number of RSV cases began rising in the United States this summer, well ahead of the usual time, according to the study. As well, Hong Kong has reported seven times the number of large school outbreaks of acute upper respiratory tract infections this year.

In Canada, doctors are already seeing more patients with colds and respiratory viruses. The return of common rhinoviruses and RSV worries Kwong. “If they are spreading, then why not influenza?” he says. In particular, he notes the number of cases of RSV in Quebec and, more recently, in Ottawa. The virus, which mostly affects children, is second to influenza in causing severe illness, he says.

In the United States, there is rising concern that nearly two years of pandemic precautions mean that our immune systems haven’t been updated with new viruses and are operating with increasingly out-of-date information, much like smartphones before operating system upgrades. In a usual flu season, there are around 500,000 hospitalizations in the United States, according to the preprint study for the CDC. Its modelling suggests there could be 100,000 “additional hospitalizations in 2021-22” in “a large compensatory influenza season in 2021-22 due to a light season in 2020-21.”

RELATED: Why I got the COVID vaccine during my pregnancy

“I’m not so convinced about that,” Kwong says, regarding the study’s modelling. For one, he notes that immunity can last for a long time. For example, he says, when the H1N1 pandemic hit in 2009, older Canadians were less affected than expected, likely because they had been exposed to a similar version of the flu years before. “If you can have some immunity from decades ago, then having no influenza for a few years may not make that much of a difference,” he says.

“Control the things that you can control,” is Kwong’s simple advice. “We’ve learned so much from COVID,” he says, that we just need to “use some of those tools to prevent influenza,” including getting a flu shot, and other basic public health measures that have become standard during this pandemic: washing hands, wearing masks and minimizing social contacts. Improving ventilation, including through HEPA filters like those being used in schools, will also help.

Canada is also getting ready. On Oct. 7, the National Advisory Committee on Immunization (NACI) advised that all seasonal influenza vaccines “may be given at the same time as, or at any time before or after administration of other vaccines, including COVID-19 vaccines.” Already, provinces and their local health units are ramping up flu vaccine drives for the most vulnerable, such as seniors and those in congregate settings like long-term care homes. In Ontario, flu shots for the general population under 65 will be available as of Nov. 1.

As in previous years, the flu season may turn out not to be as bad as expected. Current surveillance updates in Australia, which has an earlier seasonal influenza season, report that “influenza-like-illness activity in the community remains at historically low levels in 2021,” though that may be partly due to recent strict lockdowns in the country.

Though no one is sure how Canada will fare this winter, they all agree on one thing: After nearly two years of COVID-19, with a health care system stretched to the limit, making sure as many people as possible get flu shots is more important than ever.