Adnan R. Khan: The so-called Islamic State has fallen. Its caliphate has crumbled, but its ideological fervor lives on. 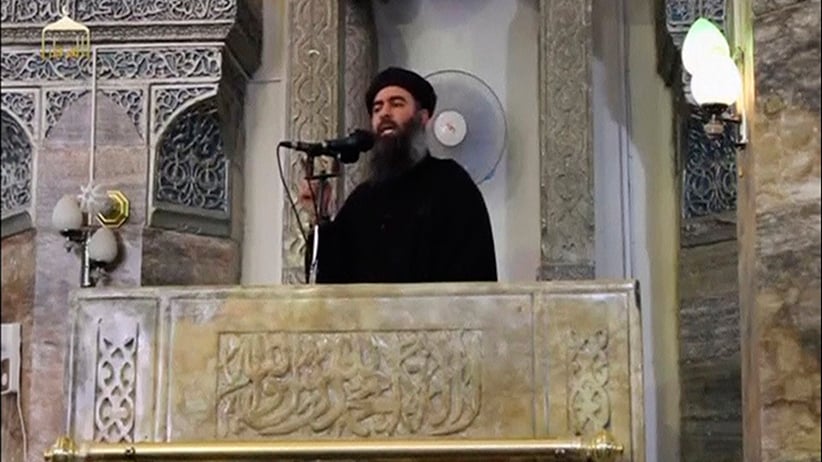 A man purported to be the reclusive leader of the militant Islamic State Abu Bakr al-Baghdadi made his first public appearance at a mosque in the centre of Iraq’s second city, Mosul, according to a video recording posted on the Internet on July 5, 2014 (REUTERS/Social Media Website/Reuters TV)

Out of the smouldering rubble of Mosul and Raqqa and the shattered dreams of the floundering Arab Spring, a new menace was born. It was destined to die young.

On July 5, 2014, Abu Bakr al-Baghdadi ascended the steps of the al Nuri mosque in Mosul for the first—and only—time to address the subjects of his newly-declared caliphate. Five days earlier, in an audio statement, the so-called Islamic State had announced it had revived what it claimed was the dream of all Muslims: a state of their own, born with God’s blessing and destined to spread around the world, subject only to God’s laws as they saw them.

Most Muslims rejected the claim and agreed this faux-caliphate should have been stillborn. Small bands of radicals had imposed their will on the umma, the global community of Muslims, with the kind of violence that would, under kinder circumstances, produce revolt.

But a unique confluence of events had ensured the caliphate would enjoy at least a few of years of life. The war raging in Syria and the deepening rifts between Sunni and Shia Muslims in Iraq provided the chaos and conflict it would rely on to grow. Its near-term survival was ensured when the group stormed into Mosul in June 2014, sending a fearful Iraqi army running, abandoning their American-supplied weapons.

Fathered by a man known for brutality and surrounded by a family of jihadists with an equally violent pedigree, the caliphate raged into the world kicking and screaming. In those early days, it fed on the fear its soldiers created. They raped and pillaged. Yazidi women were enslaved, Christian churches demolished. But for the caliphate to reach its full potential, it would need to keep growing.

READ MORE: The terrifying last days of ISIS in Mosul

The Islamic State propaganda machine went into overdrive. In late 2014 and early 2015, it produced dozens of videos claiming the caliphate was not so bad after all. It allowed a Vice News journalist to visit. The caliphate laughed and giggled for the camera. Men and boys swam in its rivers; its streets were teeming with businesses. The guardians of morality roamed the streets correcting what they deemed un-Islamic behaviour with fraternal joviality.

Its administrative limbs seemed to function perfectly, doling out justice with efficient, Sharia-proscribed brutality. There were crucifixions and beheadings but, the audience was told, these were punishments proscribed by God for crimes that threatened to unravel the fabric of their Islamic society. The innocent, they assured, lived in perfect peace and harmony.

The campaign worked. Tens of thousands of Muslims, including as many as 6,000 from western nations, migrated to Syria and Iraq. But many would soon discover that the reality was much less ideal. Decay was consuming the caliphate from the inside out. Corruption was rampant. Sayyid Younis, a truck driver from Mosul told Maclean’s in November 2016 how ISIS fighters took bribes to let him smuggle contraband cigarettes into the caliphate. For those with means, escaping punishment for breaking the caliphate’s strict rules was simply a matter of knowing who to pay off.

Civilians from liberated east Mosul painted a picture of a caliphate suffering an identity crisis, struggling to reconcile its jihadi raison d’etre with the everyday challenges of being a state. Mosul’s civilian administrators often found themselves at odds with jihadi commanders over the distribution of scarce resources. Islamic State fighters claimed first dibs on everything from food to electricity. They expected shopkeepers to provide them with discounts and, as one civilian put it, “walked around as if they owned everything.”

Internal family squabbles left the caliphate in a constant state of turmoil. One of its patriarchs, Turki al-Binali caused a stir on May 19 after he rejected a ruling by more radical members of the executive council, appointed by Baghdadi, on the application of takfir, the excommunication of Muslims. The council took a hardline approach to the issue, arguing even those Muslims living in ignorance of divine law could be excommunicated and killed. Binali proposed a more forgiving approach, arguing the ignorant were in need of guidance, not condemnation.

Binali was killed in a U.S.-led coalition airstrike on May 31. Some experts believe he was betrayed by hardliners who feared his moderation would sow divisions in the caliphate and weaken its position with the people.

But it was already too late. The disease had spread. By October 2016, when the Iraqi army began its assault on Mosul, the caliphate’s growth had already become stunted. It struggled as its ability to attract more adherents faltered. Its supply arteries were clogged after Turkey shut down access to Syria and the Kurdish-led Syrian Democratic Forces, or SDF, surrounded Raqqa.

In a fit of rage, it fought to stay alive. At first, the Iraqis struggled in Mosul. But once the city fell, in July this year, the caliphate’s remaining strongholds collapsed in quick succession: first Tal Afar, then Hawija, its last major city in Iraq, both with barely a fight.

All that remained was its Syrian capital, Raqqa. Last week, the few hundred fighters left there abandoned the city, reportedly after striking a deal with the SDF, and along with it their dream of an Islamic state.

They left behind a caliphate in ruins but took with them the ideological fervor that sustained it. Their fight, they say, is not over. Like their predecessor, al Qaeda, Islamic State looks set to be reborn as a more diffuse but potentially more dangerous insurgency. The on-going chaos in Syria and Iraq continue to provide it sustenance. Freed from the burden of state-building, it can now focus its resources on expanding its reach. Affiliates are emerging in Afghanistan, Pakistan, Bangladesh and the Philippines.

The caliphate died on Oct. 20, 2017, just three-years old and consumed by a disease that had rendered it rotten to the core. But the forces that brought it into being have survived. And they will be much harder to kill.