A refugee crisis is only half the story in Syria

Michael Petrou on why it's time to confront our original failure in Syria: allowing Bashar al-Assad's reign of terror to continue 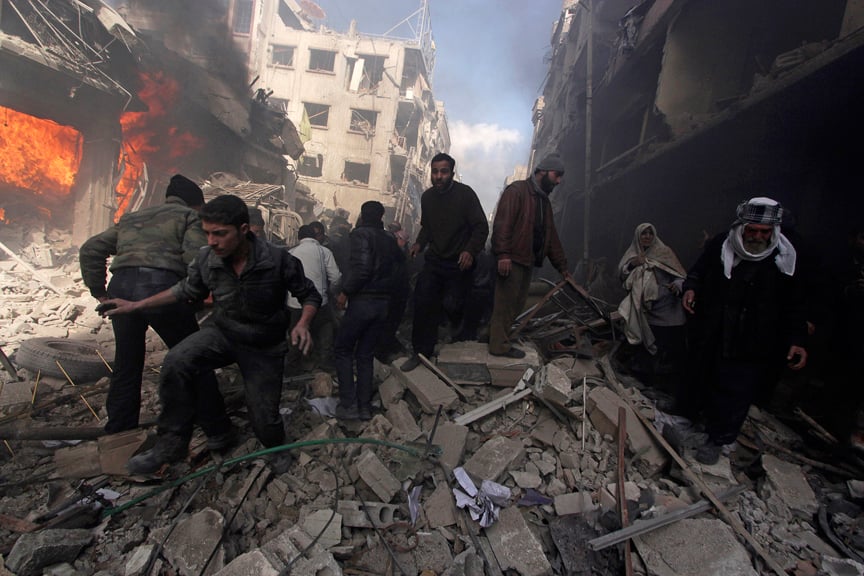 We failed Alan and Galib Kurdi, and their mother, Rehanna, long before they drowned trying to cross from Turkey to the Greek island of Kos.

A photo of Alan, 3, lying dead on a beach, face down with his arms at his side as if sleeping, has caused international outrage about the plight of the millions of Syrian refugees who have fled their homes for a chance at a better life in the West.

Tima Kurdi, sister of the boys’ father, Abdullah, who survived the crossing, lives in British Columbia.

She told media she had tried to sponsor another brother, Mohammed, to come to Canada. She says her hope was to eventually bring Abdullah’s family over as well.

Mohammed’s application was rejected. Tima says Canada requested documentation that was impossible for Mohammed to get in Turkey. She then sent Abdullah money which he used to hire smugglers to ferry his family to Greece.

The drowned boys’ familial connection to Canada has led to renewed criticism of the government’s response to the crisis. Much of this is deserved. The acceptance of 2,400 Syrian refugees to date is a paltry response to the displacement of some 12 million over the last four years.

The additional 20,000 or so Syrians and Iraqis that the Conservatives have pledged to bring in by 2019 barely dents this figure—nor, it must be said, would the slightly higher numbers promised by the Liberals and the NDP.

Turkey is hosting close to two million Syrians. Lebanon has absorbed the equivalent of 25 per cent of its population. Germany expects 800,000 asylum seekers by year’s end.

“I don’t think this will overwhelm Germany. We can handle this,” German Interior Minister Thomas de Maizière has said.

Canada’s response to the Syrian refugee crisis—while better than others, notably including America’s—has been inadequate. But before yelling louder for Alexander’s scalp, consider where the Kurdi family came from and why they, and so many others, piled into the dangerously overloaded boats in the first place.

They’re from Kobani, a Kurdish city in northern Syria that was besieged for months by jihadists of Islamic State who were hell-bent on destroying it and its inhabitants. Maclean’s met with survivors from the siege last October. One showed a photo on his phone of a severed head belonging to a man who had refused to leave his village and was caught by Islamic State—which then posted on the Internet proof of what they did to him.

This photo, too, should case outrage and demands for action. And Alexander and Prime Minister Stephen Harper are right to remind Canadians the Conservatives are the only party that thinks Canada should be part of the international military mission against Islamic State.

But there are other photos that also deserve our attention.

Take, for example, the 55,000 images taken by a photographer formerly with the Syrian military police known by the codename “Caesar.” He was secretly working with a Syrian opposition group and smuggled his photos out of the country. They depict some 11,000 murdered prisoners who died in facilities run by the regime of dictator Bashar al-Assad.

The victims were killed between 2011 and 2013 and were incarcerated in only one part of the country. In other words, there are many, many more. But even this fragment reveals sadism and murder on an industrial scale. The dead were also electrocuted, starved and had their eyes gouged out. They included children.

Those washing up dead on beaches in Turkey, or rotting in vans in Austria, or the lucky ones passing their children over razor wire fences erected in Hungary to keep them out, were also fleeing this fate.

In fact, for all the grotesque savagery of Islamic State, most dead Syrians have perished at the hands of the Syrian regime. It is Assad’s air force that drops barrel bombs on schools. It is his armed forces that have levelled entire urban neighbourhoods.

So when Harper and Alexander talk about Islamic State jihadists driving refugees into boats, they’re right, but they’re only telling half the story. Syrians are also fleeing Assad.

Most Western leaders don’t talk much about that these days—perhaps because it’s just too embarrassing. They once said Assad had to go. American President Barack Obama warned that even the movement of chemical weapons was a “red line.” Assad gassed kids to death, and still rules the country.

Many of us support the idea of accepting more refugees. Confronting our original failures in Syria, the many ways we failed Syrians long before they took flight, is more difficult. It will require hard choices and substantial sacrifices.

“I’m not a military expert. All I know is that people are dying, and the two most effective killing machines in Syria right now are Da’ish [Islamic State] and the Assad regime. And both of them need to be stopped,” Jasim al-Dandachi, a Syrian refugee now living in Montreal, told Maclean’s this summer.

“You just stop the war, and we don’t want to go to Europe,” a young Syrian migrant told Al Jazeera.

Tima Kurdi, during her news conference, said: “There’s one thing that should be done: End the war. That’s all I can say. End the war.”

Ending the war means putting an end to Assad’s reign of terror, as well as Islamic State’s blood-soaked so-called caliphate. We all say we want to prevent more toddlers drowning while fleeing Syria. We’re not really willing to do what that would take.