America is safer than ever—and yet, it's still ugly and unjust.

America isn't falling apart. It's never been safer to be black in America. But it’s still far more dangerous than being white. 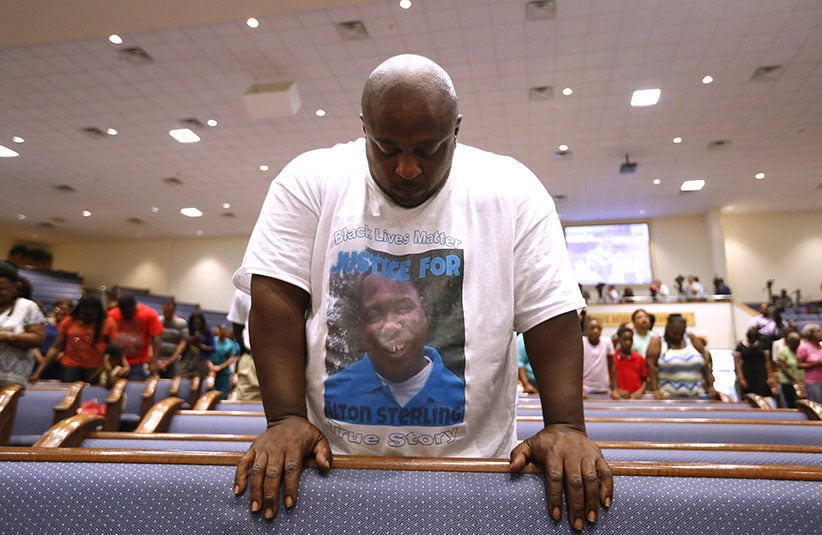 Members of the congregation pray during a vigil in memory of Alton Sterling, who was shot dead by police, in Baton Rouge, Louisiana, U.S. July 7, 2016. (Jonathan Bachman/Reuters)

It was a bad week south of the 49th parallel. The repetitive reports of shootings, cop killings and protests just kept coming, each more depressing than the last.

On July 5, a video of police shooting a black man named Alton Sterling exploded on social media. The next night, another video was streamed live on Facebook; a black woman looked calmly into the camera and explained her boyfriend, Philando Castile, had been shot by the police after being pulled over for a broken tail light. She then panned over to show him bleeding to death next to her while a hysterical police officer screamed in the background, demanding she keep her hands where he could see them. “Yes I will, sir,” she replied, looking straight into her camera and straight into the eyes of America.

The next day, in Dallas, a lone gunman killed five police officers in the midst of a Black Lives Matter demonstration. Next, in Baton Rouge, La., the media filmed police arriving in armoured cars to arrest peaceful protesters before they, too, were handcuffed. A few days after that, two bailiffs were killed in a Michigan courthouse after an inmate grabbed a gun.

On cable news, some pundits are suggesting the country has reached a critical mass of guns and hate, and race riots are inevitable. Others assure us the country is already on fire, and that everything has already fallen apart.

But, like most things, when you step back and look at the wider picture, a different narrative reveals itself.

To begin with, violence is not rising. In fact, America has not been this safe for more than a generation. According to FBI data, the rate of violent crime has dropped by half since 1993. The murder rate has fallen by a similar percentage. Even property crime has plummeted by 40 per cent. All forms of crime and violence have declined from a peak in the 1980s. You need to go back to when John F. Kennedy was president to find an equally peaceful time.

It is hard to reconcile the idea that America is safer with the daily stories of gun violence and mass shootings. Some of the numbers are genuinely horrifying: for example, on average, 36 people are killed every day in the United States by a gun. And since 2013, every city with a population greater than 400,000 has endured at least one mass shooting.

But the front-page coverage of these shooting sprees obscures the true nature of gun violence. Only two per cent of gun deaths are from mass shootings. It is actually suicides that account for the overwhelming majority—a number that has risen by more than 40 per cent in the past 20 years.

The shooting of cops is surely on the rise, though, isn’t it? Not so. The FBI reports that in 1972, 132 police officers were killed in the line of duty. That number has declined steadily ever since, and last year was down to 47, far lower than it was even in the 1960s. When you account for the growth in the number of police officers, it is now only one-quarter the level it was just 25 years ago.

The news, quite rightly, has been focused more than ever before on the number of African Americans who die at the hands of police. But this too is much better than it was. The Center for Disease Control (CDC) tracks the rate of police killings by race, and finds that 50 years ago, African Americans under the age of 25 were five times more likely to die from a police bullet than they are now.

Nonetheless, even if being black in America is safer than ever, it’s still far more dangerous than being white. More than half of all gun victims are black, even though they represent only 13 per cent of the population. If you’re an African American under the age of 25, you’re six times more likely to be killed by police compared to other races, according to the CDC. And, according to a Harvard study released this month, Hispanic and black Americans are far more likely to be the victims of police brutality than white suspects. (That same study found no racial bias when it comes to police shootings, however. In that sense, at least, American cops are colour-blind.)

The distorting lens of social media is both a blessing and a curse. It pushes a relentless stream of violence and hate into our view. We can’t look away, and we are misled into believing everything is getting worse and coming undone. But, ironically, that shock and outrage is exactly what is needed to get us out of our chairs and onto the streets. The world may not be falling apart, but it’s still ugly and unjust. And the more we see that, the more we should be demanding change and justice. In other words, don’t let the news depress you—let it enrage you.