Amid corruption and filth, a crossroads leads to Rome

How did one of the world’s most historic cities, known for its crumbling beauty, become such an awful mess? 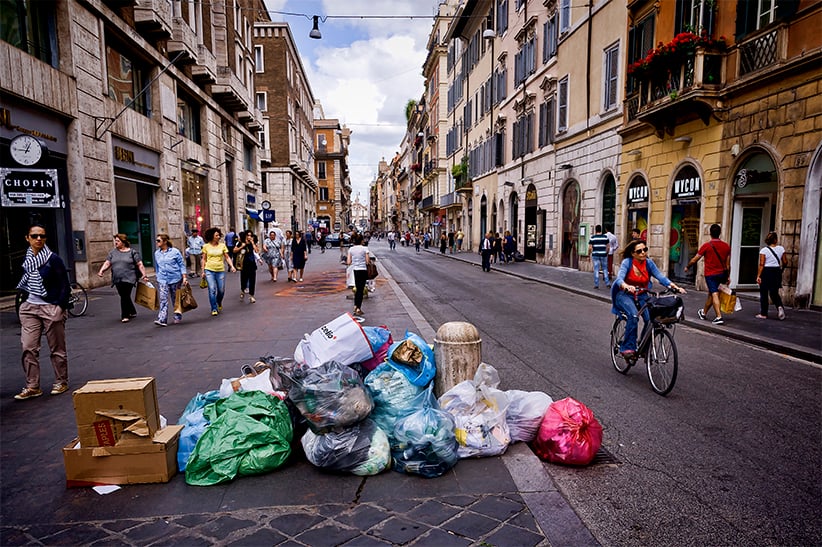 Waste on the Via del Corso in Rome city center during Garbage collectors strike today throughout Italy in support of the dispute for the contract renewal. The workers conducted a protest outside the headquarters of Utilitalia, the association representing the energy and environmental water companies on May 30, 2016 in Rome, Italy. The adherence to the strike was 90% of the 7,800 employees of Ama (Municipal Environment Company Rome) and across Italy where there are about a hundred thousand workers. (Stefano Montesi/Corbis/Getty Images).

One morning during rush hour in Rome, women wearing this year’s fashionable, toweringly high-heeled shoes walked carefully through a garbage-strewn street toward the Metro station. “Che schifo,” (“How gross”) said one as she balanced on one foot in order to remove a sticky ice cream wrapper from the bottom of her other shoe. She carried on into the station to wait on a platform encrusted with pigeon droppings for a train covered in graffiti.

Rome, a city of crumbling beauty and somewhat charming chaos, has never been known for its cleanliness. But it has deteriorated to such a state that even Romans are complaining about it. An opinion poll taken two weeks before the June 5 mayoral elections revealed filth and deterioration of the city as the No. 1 election issue, closely followed by corruption and then transportation issues, but remarkably well ahead of immigration and unemployment.

In 2008, Rome elected the centre-right Gianni Alemanno as mayor. He promised to clean up Rome. His election coincided with the emergence of a website called Roma fa Schifo (“Disgusting Rome”), which highlighted what a mess the city was becoming. It featured photos of historic streets and landmarks covered in graffiti and garbage.

But the city was not cleaned. In fact, it became dirtier—figuratively and literally. Alemanno, who is now in the courts on corruption charges, was mayor during a period when many of the contracts for park maintenance and street repairs were taken over by organized crime. Investigations in 2014 into politicians thought to be working with criminal organizations brought some of those services to a halt. The city has not yet given out new contracts. Smaller parks have been locked and left overgrown. In some areas, residents have broken the locks and cut the grass themselves. Small gardens in traffic circles are still left untended, prompting local gardeners in some cases to take over, with mixed aesthetic results.

In 2013, Ignazio Marino, a centre-left politician, succeeded Alemanno as mayor. His chief attribute was that he was honest, but that soon became an impediment, since he couldn’t work with the corruption already embedded in the city. He was pushed out of office in 2015 for being ineffective. Until last month, the city had been run by a bureaucrat appointed by the prime minister, and very little was being done to maintain the city.

On June 5, Virginia Raggi of the Five Star Movement, an outsider party started by the comedian Beppe Grillo, took 36 per cent of the vote and Roberto Giachetti of the Democratic Party took 25 per cent, with the rest split among three other candidates. On June 20, Raggi was elected mayor on a second ballot. Her first promise has been to tackle corruption and restore city services.

“It’s clear the authorities need to take care of the city,” says Virginia Vitalone, who works for Retake Roma, an association started in 2009. It has grown from a handful of concerned citizens to a volunteer network of 30,000 people. “But we need to have civic pride. It is normal for a Roman to throw things on the ground. People forget that they can do something about their own neighbourhood.”

Retake Roma organizes neighbourhood groups that clean up trash, fill potholes and scrub graffiti. The city’s underfunded and understaffed sanitation service provides the volunteers with cleaning materials. Some argue that this allows city workers to do nothing while armies of free labourers go about cleaning a few streets here and there. “My generation grew up without any civic education,” says Vitalone. “People complain but expect someone else to solve the problem. Here we say there is also something you can do.”

She acknowledges that volunteer groups can only do so much. Retake Roma asked each of the mayoral candidates to describe their plans to clean up Rome. They published the answers on social media sites in order to hold the new mayor accountable for supporting citizen initiatives, but also to ensure the sanitation agency and the public-park crews actually do their jobs.

But this job may be worse than the fifth labour of Hercules, especially given the growing homeless population along with the Roma, who regularly empty garbage bins onto the streets looking for useable items. The city picks up trash from the containers but rarely cleans up what’s left on the ground. Graffiti writers, emboldened by the lack of deterrent, seek out ever more prominent places to leave their marks. “This was a beautiful view once,” says Stefania Cecconi, a Roman citizen, standing on Ponte Sisto, the bridge that connects the Trastevere neighbourhood to the historic Via Giulia. She indicates the graffiti covering the walls that bank the river and the huge “TOP DOGS” tag painted on the side of Ponte Garibaldi. “It’s been there for a long time, and no one cleans it off.” She shrugs her shoulders. “Maybe a new mayor can’t fix this. Rome is not a normal place.”