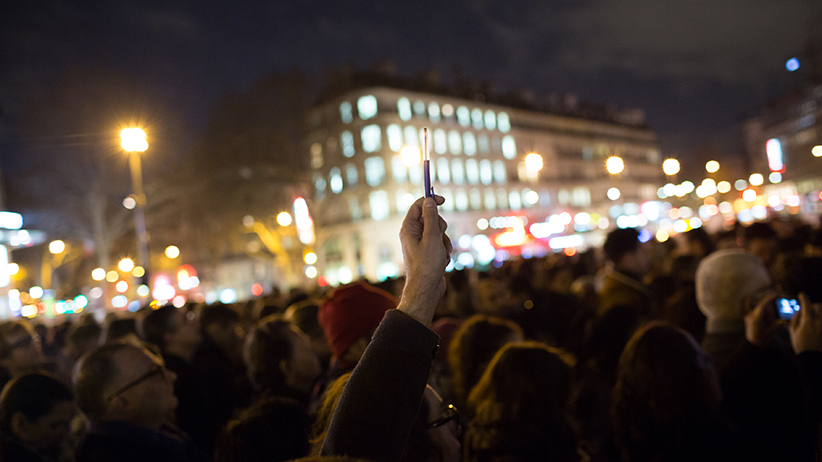 A man holds a pen up at Place de la République as thousands congregate on the day after the Charlie Hebdo massacre in Paris, France on Jan. 8, 2015. (Nick Kozak)

It is difficult not to be intemperate in the face of nine murdered journalists, two murdered policemen and a janitor, lying in pools of blood in Paris, the City of Lights: the cold, calculated killing spree a response to journalism that was displeasing. The magazine Charlie Hebdo was firebombed in 2011. Though it regularly heaved dung across and beyond the political spectrum and satirized many religious figures and religions including the Pope, Jews, Christians et al, it was Charlie’s caricatures of Islam that brought on the bombs and murders. Not surprising, in our time when virtually all terrorism of the last few decades—whether in Russia, China, Germany, the killing fields of Syria and the Middle East, New York or Boston—has been carried out in the name of Islam.

There is really no point in fatuities about Islam being just as tolerant as all other religions, which was uttered endlessly by commentators covering the Paris horror. The public face of Islam has been hijacked by Islamist fundamentalists with a zero-tolerance policy. Though I really wish we had more than the occasional imam declaring this act to be barbaric, I can understand why Western Muslims—the majority of whom I expect and hope despise this carnage—aren’t taking to the streets to decry what is being done in the name of their faith. When hundreds of girls are kidnapped, enslaved or murdered in Pakistan or Nigeria for attending school (when even in Canada a Muslim women may run a risk of being killed for not upholding the family honour in a forced marriage), when Canadian-born youths are training as jihadists or fighting in Syria, fear takes over. Why endanger your own family or relatives abroad?

“Senseless killings,” said NDP Leader Thomas Mulcair in condemning the latest violence. Not senseless at all. Terror works.  You can see how Islamic terrorism has gripped a culture when even those who may be mentally ill, possibly like Michael Zehaf-Bibeau, the lone Parliament Hill gunman, seem to carry out their deranged acts in the name of Islam.  They don’t kill in the name of vegetarianism or Napoleon. Their targets aren’t electricians or acrobats but the people symbolic of Western values—those standing guard over its memorials or working in its parliament.

On the CBC some commentators tried out the notion that Canada didn’t have the same problem as France because our multiculturalism was so much more successful than (failed) French attempts to assimilate its Muslim immigrants. This showed a rather scanty knowledge of recent history. Algeria was until 1962 a “department” (province) of France and its residents held French citizenship. After a bloody war for its independence causing about a million casualties (figures are difficult to verify), about 1.8 million Algerians moved into France with some economic help from the French government. About 800,000 were Arabs or nomads and the other million were the pieds-noirs—Europeans who had lived in Algeria. If Canada found itself with such high numbers of Muslim immigrants—many of whom were unskilled, if not illiterate—our multicultural approach would probably succumb to ghettoes with better living conditions than those faced by the displaced in France but certainly not without serious problems.

For my money, the reason we don’t have a slaughter like the one at Charlie Hebdo is because no such magazine would ever be allowed in Canada. We save our Kalashnikovs for murdering free speech. First we had the human rights commissions who literally jackbooted freedom of expression. The case against Maclean’s centred largely on an article of Mark Steyn’s. The Canadian Islamic Congress didn’t like his piece on Islam and filed complaints with the federal as well as two provincial human rights commissions. Steyn’s work was vigorously defended by Maclean’s and Rogers Communications. Maclean’s and Steyn won. But the cost was high.  I speak from experience. When in 2011 I had the one and only column of my 37 years of writing for Maclean’s spiked, it was on Dutch anti-Muslim immigration politician Geert Wilders. I thought it was pretty milquetoast writing since I was automatically self-censoring and pulling my punches but I really couldn’t blame Maclean’s.  They were suffering from battle fatigue: nothing is more enervating and time-consuming than filling out the endless details and forms that human-rights complaints require. Not to mention the legal fees. “You’d win,” said one of my editors. “We know that. But we just can’t go there again.” In my view there is no media outlet in Canada brave enough to allow a full and proper discussion of Islam.

After the imbroglio with Steyn, Prime Minister Harper gutted the HRC ability to monitor free speech.  The issue went by default to the Supreme Court—an inhospitable terrain for freedom. The jurists took on a case involving flyers written about a cow almost as sacred as Islam, namely homosexuality. The flyers written by “Christian Trust Activist” William Whatcott wanted to bring “sodomites” to Christ for redemption but not into classrooms as teachers on human sexuality. The unanimous judgment of Canada’s Supreme Court (overturning the Saskatchewan Court of Appeal that had allowed the flyers) should have been reprinted in its entirety in a Canadian satirical magazine with cartoons of our jurists were such a magazine allowed in Canada, which, according to the Supremes’ decision, it would not. Yes, we have free speech, said the Supremes citing the Charter of Rights but that doesn’t mean we can say anything we like because free speech may be hate speech or at least hateful to some group. But a guarantee of free speech is not divisible. You can’t guarantee “some free speech” any more than you can be “a little bit” pregnant.

“Everyone has their red buttons,” said one listener to a Toronto radio show on the Paris murders. CNN’s Christiane Amanpour—while condemning the killings in the strongest terms—remarked that Charlie Hebdo did go “over the top.” More than the God-awful (and I use His name advisedly) Broadway hit production Book of Mormon? And where are the red buttons among Christians when thousands of their fellow worshippers are being slaughtered by Muslims in Africa and the Middle East and tortured by communists in China, North Korea and Cuba?

Terror can backfire in the sense that some people finally dislike being scared and react by doing whatever terror is discouraging. This is generally a temporary response. As George Jonas pointed out in a 2013 column, human beings find a way of rationalizing their behaviour so that they can claim they are refraining from publishing or saying something not out of fear but because they don’t wish to offend. They convert the base notion of being scared into a noble weapon of seeing someone else’s point of view. In fact, this is one of the most insidious aspects of terrorism: we wash our brains and convert our fear into understanding. Example: the awful spot CBC put news host Evan Solomon in when reporting the Paris murders. He was given the job of reading CBC’s rationalization to explain why, although the motive for the Paris murders were Charlie’s cartoons of Muhammad and Islamists, the CBC would not show the cartoons in reporting the story. I didn’t tape his explanation, fascinated as I was by its maze of clauses, but the phrase “not to offend” made a cameo appearance.

The West has been ready to give up on itself for some time now. We have no idea of what we stand for and seem to have no faith other than lip-service in the superiority of our institutions. If 9/11 can somehow be made to feel like partly the fault of America, then change foreign policy or administrations and the problem will go away. If young Islamic terrorists are created by feelings of  “alienation” then the problem will be solved by getting them to like us. It’s so comforting. Fundamentalist Islam is on the march and all we can do is worry about giving offence. When the blood of journalists can only be expunged by denying other journalists the right to say or show what they died for, we are hemorrhaging freedom. I have no children but some coming generation will pay the price for their parents’ cowardice.