After a spate of attacks, elderly women in Nairobi are turning to self-defence classes to protect themselves

Sitting on a wooden bench in a dusty, barren clearing surrounded by walls of corrugated iron, a group of old ladies watch their mate, 72-year-old Wambui Kimuhu, kicking and punching an unlucky sparring partner 30 years younger than her. Using her bare hands and legs, Kimuhu yells an intimidating “No!” after every stroke, forcing him to retreat until instructor Sheila Kariuki stops the fight. “The training is finished, you don’t have to kill him!” she shouts, while the surrounding grannies clap. 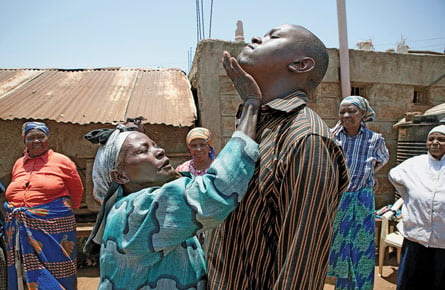 Here, at the Streams of Hope and Peace charity training centre in the slum of Korogocho, Nairobi, more than 30 local grannies are undergoing a free martial arts course to protect themselves from a recent spate of house robberies and rapes. Aged from 50 to 100 (many don’t know their age), the “Cucu Takinge,”—”Grannies defending themselves” in Swahili—learn the basics of karate and kung fu, along with “dirty tricks” such as pokes in the eyes and kicks to the groin. The course aims to give the old ladies time and space to seek help in case of an attack; therefore, accuracy in the strokes and yelling are more important than strength. There are even specific techniques conceived for blind people. “Remember, your goal is to force back the attackers and attract attention. Never try to compete with younger guys, because they will win,” Kariuki warns the ladies, some of whom appear strong and fit while others struggle even to lift their legs, hampered by their long African gowns.

Since 2009, Kariuki has trained dozens of old women in the slums of the Kenyan capital, where unemployment, drugs and alcohol have created a social ticking time bomb. With its 150,000 inhabitants crammed into just 1.5 sq. km, Korogocho, with its tin houses and open sewers, is no exception. “Guys here are desperate,” explains sparring partner Julius Maina. “They don’t have jobs, women or kids. Many spend their days drinking, and at night they might become really dangerous.”

The threats elderly ladies face are real. According to the Gender Recovery Center of the Nairobi Women’s Hospital, 223 out of 2,300 rape cases registered in 2009 by the hospital concerned women over 60. Perceived as weak and defenceless by their assailants, grannies are also believed to be untouched by the high rates of HIV infection among young women. “Many are widows, so guys think they haven’t had sex for a long time,” says Maina. “For them, they are sort of virgins.” Life here has never been easy, but since 2008, the situation has gradually deteriorated: old ladies are now openly threatened during the day, in crowded places like water collecting points or main roads.

Avoiding going out of the house is not an option, because many old ladies don’t receive any pension and live off the limited money they make by selling groceries or keeping small shops. Some still have to maintain their sons and grandchildren.

Mary Njoki, a 57-year-old local lady, decided to join the self-defence classes after a female friend was raped and killed. “I still remember her naked body lying on the road,” she recounts. “I felt so sad for her.” Njoki started the training in the fall, and is now one of the most enthusiastic followers after she was able to fend off an attack on a local priest thanks to the techniques she’d learned. “I saw a bunch of guys approaching him—one had a knife. I came from behind and twisted his hand until he dropped the weapon and fled,” she says proudly. “They were shocked when they realized I was an old lady. Even the priest asked me where I had learned these things.”

The success of the initiative has been good, and Streams of Hope and Peace is soon to start similar courses in other parts of Kenya. If anything, the free-of-charge, twice-a-week training has given the Korogocho grannies a glimmer of hope for the future: they are now more self-confident and aware that, because assailants don’t expect them to react, even slight resistance might suffice to scare them off. “The secret is all in here,” explains Njoki, touching her head. “If we are sure of ourselves, no one can hurt us.”

FILED UNDER: Kenya Nairobi self-defense Streams of Hope and Peace violence against women