In Athens, an anarchists' hotel for refugees

Taken over illegally from bankrupt owners, the hotel is now a friendly migrant oasis amidst a still-unfolding disaster 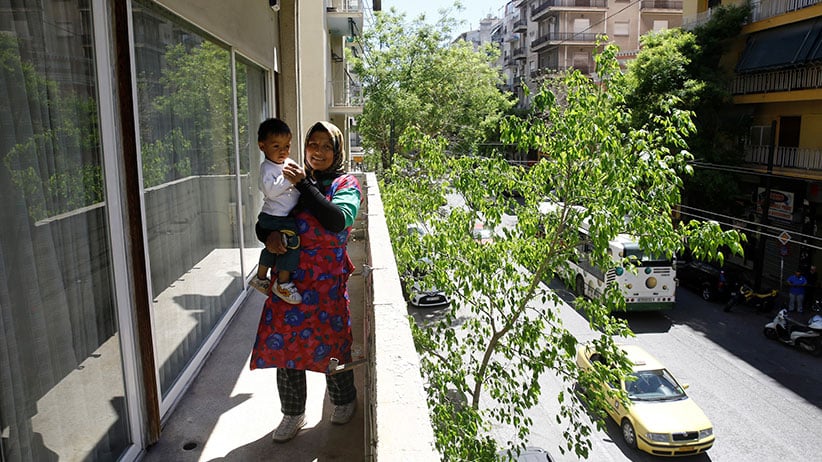 A refugee woman stands with her baby at the balcony of City Plaza hotel reopened for refugees by an organization which support refugees in Athens Greece on April 26, 2016.
(Ayhan Mehmet/Anadolu Agency/Getty Images)

It should tell you something about the chaotic shambles the European Union has made of its efforts to handle the Mediterranean refugee crisis that one of the few oases of order, competence and calm available to roughly 60,000 migrants an EU-Turkey pact has left stranded in Greece is a former hotel run by youthful anarchists who illegally “expropriated” the empty seven-storey property from its owners last year.

The City Plaza Hotel in Athens’ Pedion Areos district, shuttered during the 2010 economic collapse that left Greece a pauper among the EU’s 28 member states, is one of several refugee “squats” organized by migrant-solidarity groups housing perhaps 3,000 migrants in vacant buildings across Athens. City Plaza was opened April 22, 2016, just weeks after the EU entered into a squalid arrangement with Turkey amounting to a $4.5 billion bribe to Ankara to stop refugees from heading out in rickety boats for the Greek islands in the Aegean Sea.

In the same way that Canada technically disallows refugee claims from people arriving from the United States, the March 2016 agreement granted Turkey “safe third country” status. Any asylum seeker who arrived in the EU from Turkey after the deal was announced is expected to be sent back. The 60,000 migrants trapped in Greece are mostly Syrians who arrived from Turkey prior to the March 2016 deal. They have little available to them outside a notorious archipelago of officially-sanctioned tent encampments, shipping-container shelters and disused warehouses situated in isolated places throughout Greece.

Although the EU has spent or committed $800 million to process the migrants, asylum claims tend to disappear into the UN and EU bureaucracy and nobody can say exactly where all the money’s gone. Amnesty International calls the EU-Turkey pact “a shameful stain on the conscience of Europe.” Médecins Sans Frontières says that despite the EU’s boasts, the deal is “not a success story, but a horror story.” The Save the Children organization reports “deplorable” conditions in the camps: inedible food, limited access to services, and barely any healthcare. Suicide is becoming commonplace.

In sharp contrast, the anarchists’ City Plaza Hotel, home to about 350 migrants, is a friendly hive of Yoga classes, carpentry classes and language classes in Greek, English and German. There are shared work rosters for cafeteria duty, cleaning duty, and security. Most of the City Plaza residents are Syrian refugees, but the hotel also provides shelter to Eritreans, Iranians, Ghanaians and Somalis. They’re provided with bedding, clothes, shoes, three meals a day, and whatever medical assistance they might need.

“Everybody does what they can,” Miguel Carvajal, one of a couple of dozen “solidarnos” who volunteer at City Plaza, told me during a visit the other day. A 26-year-old freelance journalist from Madrid, Carvajal sometimes handles “the front desk” and otherwise takes on a variety of duties that suit his skills. “I also teach classical Spanish guitar.” He smiled. “But only on a very, very basic level.”

City Plaza’s legal owners, who declared bankruptcy in 2010 and cost the hotel’s employees a significant sum in unpaid wages, have found little sympathy at city hall in their complaints about the anarchists. Athens Police, too, tend to overlook the “refugee squats.” The solidarity organizations provide food and shelter to thousands of people who would otherwise be homeless and prone to street crime. A network of Athens lawyers helps the hotel “guests” with their asylum claims.

More than a year has passed since the EU-Turkey refugee agreement, and only about 10,000 refugees in Greece have been resettled in other EU countries. Of Syria’s roughly six million refugees, about three million are living in Turkey. Since the Turkey-EU deal was signed, fewer than 4,000 refugees have been resettled from Turkey directly to the EU. The best that can be said of the EU-Turkey arrangement is that it has somewhat quieted European hysteria about the EU being “swamped” by refugees.

About a million people —half of them Syrian—arrived on Europe’s southern shores over the two years prior to the March 2016 agreement. Roughly 175,000 migrants made the brief journey from the Turkish coast to the Greek islands last year, before the Balkans’ borders were sealed and the EU-Turkey deal came into force. As of April 26 this year, fewer than 5,000 made it across from Turkey. But they’re still drowning. Last month, a dinghy overturned off the island of Lesvos, and 16 migrants drowned.

Migrants are still setting out on the far more perilous voyage across the Mediterranean from North Africa, too. The UN counts 43,490 arrivals so far this year (more than 1,000 people have drowned in the crossing). Italy has offered the embryonic government of Libya $215 million to stem the migrant traffic—180,000 people arrived on Italian shores last year after having put out to sea on the Libyan coast. And the EU is attempting to replicate its Turkish arrangements with Libya. In February, EU leaders agreed to provide the Libyan government with another $215 million to equip the Libyan coast guard and set up “safe” camps in Libya.

“In these camps, everything is bad,” Carvajal, the City Plaza “solidarno,” told me. “What we want to show is that there is another way of integration that is possible, something better than the camps, which are just ghettos.”