Is falling asleep next to an electric fan a potentially fatal mistake? In South Korea at least, it is widely thought to be. 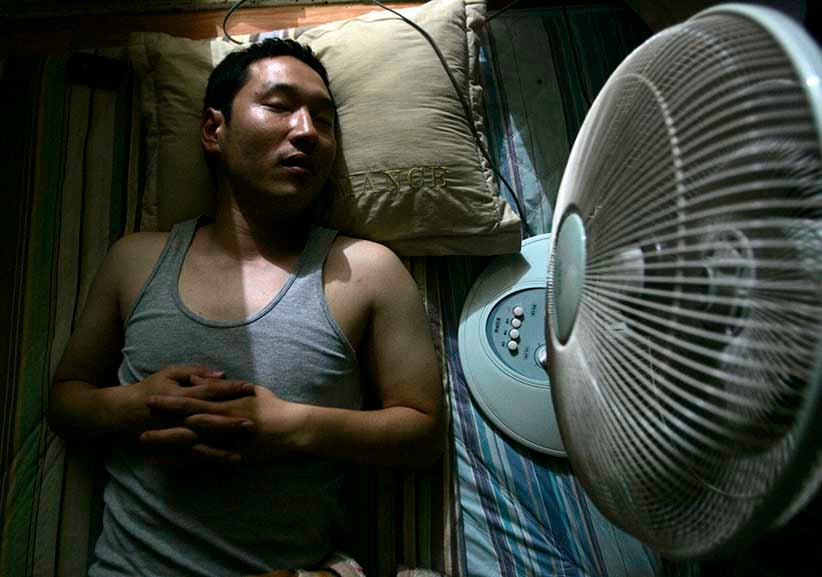 A man lies next to an electric fan in his home in Seoul. Summertime in South Korea means cold beer on steamy nights and lonely deaths in stuffy rooms blamed on electic fans. Electric fans and Koreans are a deadly combination, according to an urban legend in the country that has it if a person sleeps in a closed room with a fan on all night, he or she may never wake up. (Han Jae-Ho/Reuters)

Rose Kang describes that whenever a ceiling fan starts to spin, she vomits. After a few hours around any fan, she says, her cheeks start to swell and her head begins to pound. Yet, her experience is relatively minor. In South Korea, newspapers and a government agency report that the air blowing from an electric fan can cause death. “If you fall asleep with it going, you’ll die the next day,” says Kang, who moved from Seoul last year and now works at a hair salon in Toronto’s Koreatown.

The daily newspaper in Ulsan, one of Korea’s largest cities, wrote in 2013 that a 58-year-old man died, after an evening of heavy drinking, due to falling asleep with his fan blowing on him. He went to bed early; his wife called the ambulance at 7:13 p.m., and paramedics arrived 15 minutes later to find him dead. Later that month, Seoul’s main newspaper explained that, after drinking alcohol, sleeping with an electric fan running causes the body temperature to drop fatally low.

Hypothermia is not the only explanation for “fan death,” as the phenomenon is called in English. According to the Korea Consumer Agency, an arm of the government of South Korea, the air from fans may also cause dehydration by drying a person out. The agency warns that fans—and air conditioners—even more frequently lead people to suffocate, as the appliances will recycle exhaled carbon dioxide back into a person’s lungs. It lists “asphyxiation from electric fans and air conditioners” as the most common summertime injury (followed by sunburns among children left inside cars). “To prevent asphyxiation,” reads a warning from the agency in 2007, “timers should be set, wind direction should be rotated and doors should be left open.”

Between 2003 and 2005, the agency reported a total of 20 fan deaths. Its injury surveillance system says it collects data from 66 hospitals and 18 fire stations, as well as from individuals who report incidents through the agency’s hotline and website. The agency did not respond to requests for information about the number of fan deaths and injuries between 2014 and 2015, and the detective division of the Korean National Police Agency says it has not collected statistical data. However, warnings against fans continue—and not just in South Korea. Public Health England published a national plan for heat waves in May 2015, reading, “Fans can cause excess dehydration. The advice is to place fans at a certain distance from people, not aiming it directly on the body and to have regular drinks.” In June, the World Health Organization published a document titled Heatwaves and Health: Guidance on Warning System Development. The section on electric fans reads, “When used inappropriately, electric fans can exacerbate heat stress . . . Fans need to be used with caution and under specific conditions. Generally, the use of electric fans should be discouraged, unless they are bringing in significantly cooler air.”

Earlier this year, academics from the University of Ottawa and the University of Sydney published an article disproving the danger of dehydration by electric fan. They conclude, “Current public health guidelines regarding fan use during heat waves appear flawed.” The authors state that some guidance “partially violates fundamental physical laws” and “exaggerates the increased risk of dehydration with fan use.”

Of course, some South Koreans think the risk of death is just a fantasy. The Chosun Ilbo, a newspaper based in Seoul, published an article in 2014 titled, “Fan Suffocation, True or False?” It determined that an individual would instinctively wake up before suffocating or becoming hypothermic. Dr. Matthew Chin Young Kim, a family physician who grew up in Korea, laughs at the concept of fan death. “Unless the building materials in the room were very toxic, I don’t see how it could happen.” Danny Woo, a 21-year-old South Korean, says fan death is “a ridiculous fairy tale. It’s something parents tell their kids, and the government tells the parents, to get them to turn off the fans.”

Woo could be right. Fear of fan death may help Korea to conserve a vulnerable power supply. The country must import 96 per cent of its energy and, when two of its own power plants closed in 2013, the Ministry of Trade, Industry and Energy reported “unprecedented power shortages.” That summer, the ministry mandated public offices to cut energy consumption by as much as 20 per cent. Reuters once suggested a correlation between the first report of fan death in 1970 and the spike of energy concerns in Korea. However, the fear may have begun right from the advent of electric fans in the early 1900s. By that time, the Buddhist prioritization of the breath and fluctuations in the body had been influencing the culture for 1,500 years.

Samsung Electronics Co., a Korean company, continues to sell fans in South Korea, but all their models sold locally either have built-in clocks or timers to automatically shut off fans. Eunyoung You, an electronic product designer who designs fans for Samsung, explains, “Some people say they have puffy face[s] in the morning if they leave the fan turned on.”

Now that Kang lives in Toronto, where the average July temperature is about five degrees lower than in Seoul, she does not risk using a fan at all. However, as a hairdresser, Kang also worries about the danger of her blowdryer. She cleans it at least once per month to ensure it does not collect bacteria, which she says would make its airflow even more harmful, and she takes heed not to aim in any client’s face. “I use the lowest setting, not for more than 20 minutes,” she says. Kang must watch the clock herself. Even in Korea, hairdryers do not come with timers.