Bow down before 'the People's Horse Breeder'

Turkmenistan's leader Gurbanguly Berdymukhamedov, who famously fell off a horse, is busy building his personality cult with a new statue of himself—riding a horse 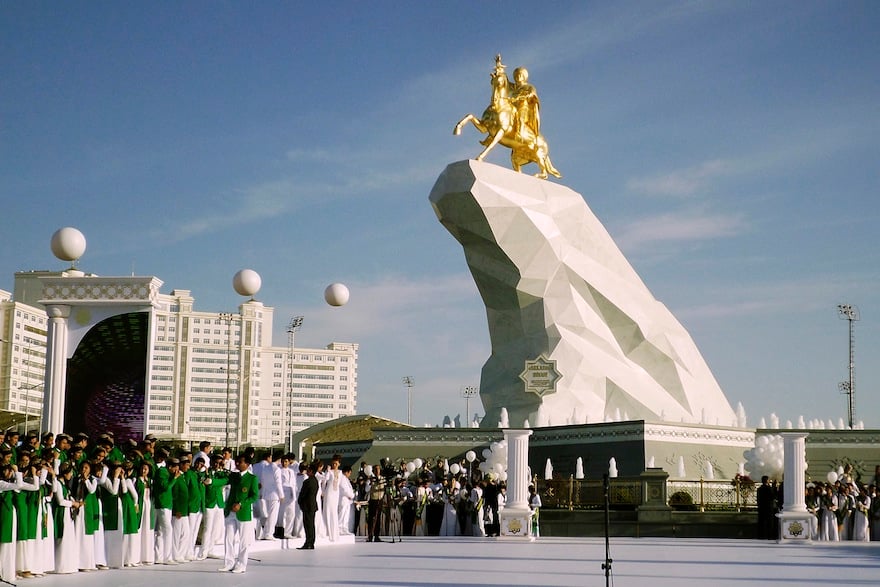 People gather for the monument unveiling ceremony in Ashgabat, Turkmenistan Monday, May 25, 2015. The isolated energy-rich Central Asian nation of Turkmenistan has unveiled a gold-leafed statue of the president in a gesture intended to burnish the leader’s burgeoning cult of personality. The 21-meter monument presented to the public Monday consists of a statue of President Gurbanguly Berdymukhamedov atop a horse mounted on a towering pile of marble. (AP Photo/Alexander Vershinin)

It must be difficult for world leaders to follow in the footsteps of a megalomaniacal lunatic, especially if you aspire to a similar status. So spare a thought for Turkmenistan’s longtime president, Gurbanguly Berdymukhamedov.

In 2006, he succeeded Saparmurat Niyazov, who led Turkmenistan through its transition from a communist dictatorship, in which he wielded czar-like powers, to a non-communist dictatorship, in which he did the same. Niyazov banned opera and ballet, but also reportedly banned lip-synching at public concerts—so, culturally, his impact was a bit of a wash. He dubbed himself “father of the Turkmen” and built a 95-m-tall monument topped by a gold statue of Niyazov that rotated to always face the sun.

And that’s where things have become tricky for Berdymukhamedov. For a while, Turkmenistan’s second president tried to pare down the cult of personality Niyazov had built. He flirted with mild liberalization and reversed some of Niyazov’s weirder orders. Opera is again permitted in Turkmenistan, although the official status of lip-synching is unclear. But Berdymukhamedov soon decided that Niyazov might have been on to something and is now busy building his own personality cult to rival that of his predecessor.

Much of this is basic stuff. You put your portrait up on billboards and factory walls across the country. A nickname is handy. “Father of the Turkmen” has an admittedly nice ring to it, but was taken. So, in April, Berdymukhamedov settled on a moniker of his own: “People’s Horse Breeder.” It may sound better in Turkmen.

These measures were apparently insufficient. Today in the capital, Ashgabat, Turkmenistan unveiled a massive gold-leafed statue of Berdymukhamedov atop a horse, which, in turn, stands on a towering block of white marble. The whole structure is 20 m tall, shorter than the sun-facing vanity project Niyazov built—but then, Berdymukhamedov had that one shipped to the outskirts of town, so he may be hoping no one will compare the two.

Berdymukhamedov is depicted riding the horse, rather than falling off of it—which is what he did during a race in 2013. Spectators at the event were reportedly searched as they left the stadium to ensure that no video footage of the fall would survive. Some did, of course, but Turkmen media have elected not to broadcast it.