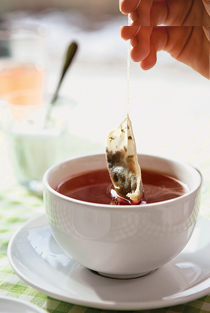 Britain’s tea addiction is sparking an ecological crisis. The country’s 62 million residents consume 165 million cups of the hot beverage every single day, and the soggy leftovers are piling up. Wrap, the U.K.’s national recycling and garbage reduction body, estimates that tea bags are now the single largest food waste contributor, adding 370,000 tonnes to landfills each year. So they’ve partnered on a new campaign with the nation’s largest tea maker to convince people to compost the sachets rather than toss them out with the trash.

The pilot program, which debuted this month, features bus shelter posters and newspaper ads with the iconic—at least to Britons—PG Tips monkey doing his part, dropping a bag off a spoon into an organics bin.

Previous attempts to compost the bags hit some serious hurdles. In 2005, Wales residents were ordered to toss, not compost them, over fears they might have come into contact with meat, and thereby spread foot and mouth disease. And in 2010, consumers were told to pitch the wrappers because many contain non-biodegradable plastic.

PG Tips is probably the right place to start. They introduced the tea bag to Britain in 1960.