By turning their backs, police are deepening America's tribalism

The Editorial: Public criticism is not betrayal. And by ignoring that, U.S. police are highlighting a dangerous social divide. 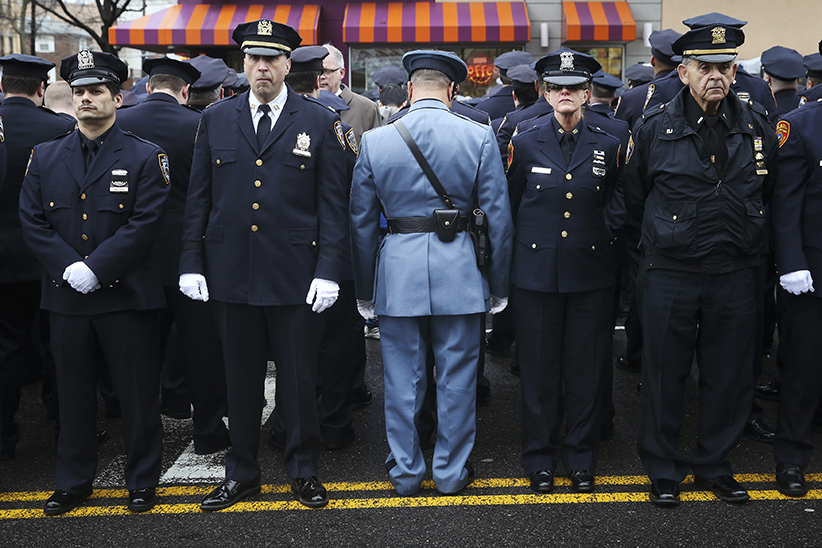 America’s streets are turning black and blue. A rising tide of urban tribalism, most readily apparent in the deplorable behaviour of New York City cops, is bad news for democracy and civil discourse south of the border.

Following the high-profile deaths of two black men at the hands of white police officers in Missouri and New York City—and in response to street protests and social media campaigns expressing outrage that none of the officers involved faced criminal repercussions—many U.S. politicians properly acknowledged the enormous racial divide in American law enforcement. President Barack Obama called it “one of the most important issues I face.” New York Mayor Bill de Blasio similarly expressed sympathy for the protesters. “The way we go about policing has to change,” he said. It seems a rather obvious point to make. Yet such criticism has sparked an ugly political power play.

After the murder of two New York police detectives, Rafael Ramos and Wenjian Liu, by an African-American man on Dec. 20, police union president Patrick Lynch provocatively declared, “There’s blood on many hands tonight [and it] starts on the steps of city hall in the office of the mayor.” At the funerals of Ramos in December and Liu this past Sunday, hundreds of New York police officers in formal dress uniform turned their backs on de Blasio as he delivered an official eulogy. Others signed a petition asking the mayor not to come to their funeral if they’re killed in the line of duty. And weekly city crime statistics reveal a sudden drop-off in arrests, summonses and parking tickets, suggesting the possibility of a covert work-to-rule campaign by angry cops. It’s not quite open rebellion against civilian authority. But it’s dangerously close.

This rift between the mayor, an elected official who speaks for all New Yorkers, and police—sworn to protect the city and its inhabitants—has deep roots. Pugnacious police union officials tend to treat all mayors with hostility; even tireless law-and-order advocate Rudy Giuliani suffered protests from the boys in blue during his time in office. So payback for Democrat de Blasio, who campaigned on a platform overtly critical of police, is to be expected.

Beyond such municipal machinations, however, the actions of New York’s “finest” threaten to damage the reputation of police officers everywhere. Policing is an honourable, admirable and utterly necessary component of any free society. It’s also dangerous business, as evidenced by the deaths of Ramos and Liu, not to mention the murder of three RCMP officers in Moncton last June. Those who enter the profession are typically driven by a deep interest in protecting and serving others, a fact repeatedly and gratefully acknowledged by de Blasio, Obama and many other critics.

That said, no one can put himself above the law, or claim public criticism to be tantamount to betrayal. Public-police relations in Canada are generally positive, because police here accept close scrutiny as a key component of the legal system. Outside Quebec, any suspicious death in Canada involving a police officer is investigated by an independent body, insulating police from suspicions of a cover-up and raising public confidence in the process. (Surely, it’s time Quebec caught up to the rest of the country in this regard.) Where systemic problems have occurred—various RCMP scandals, for example, or the G20 summit—the public response has been to demand improvement. And, by and large, police have accepted such critiques with an appropriate sense of obligation, at least after the fact.

By contrast, the stridently reflexive reaction to their critics displayed by New York police is not only ill-founded, but suggestive of a growing lack of cohesion throughout American society. Demands for unstinting loyalty to one’s tribe—be it race, religion, political belief or occupation, regardless of evidence or arguments—has become disturbingly commonplace since 9/11, and to no good effect. “America’s new tribalism can be seen most distinctly in its politics,” Robert Reich, former secretary of labour under president Bill Clinton wrote last year, lamenting the ways in which Republicans and Democrats increasingly live separate lives. “Each tribe is headed by a rival warlord whose fighting has almost brought the national government in Washington to a halt,” he writes.

If the U.S. loses the ability to have a coherent conversation, let alone achieve consensus, on topics of national importance, then real progress will become impossible. Democracy demands a recognition of legitimate points of view different from one’s own. On the issue of race and policing, politicians must, obviously, refrain from demonizing cops for political gain. But police must also show respect for the views of elected officials, and accept that criticism is a necessary first step to self-improvement. Law enforcement is a vital profession and a public service with a long and noble tradition. No one should turn his back on that.