Can Pakistan control its extremists? 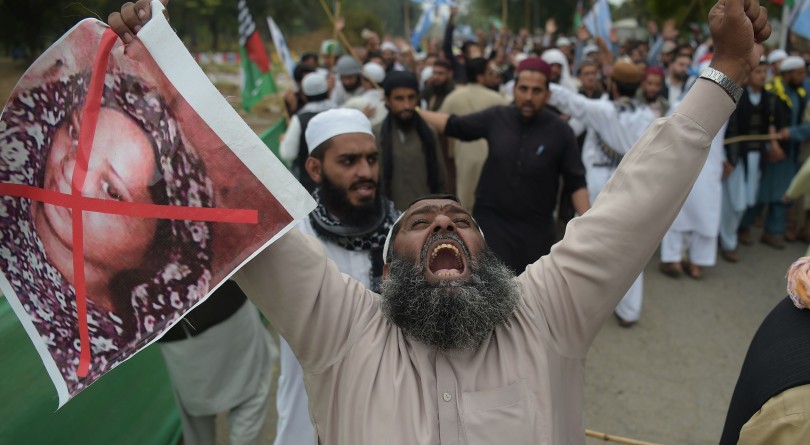 A supporter of the hardline religious party Ahle Sunnat Wal Jamaat holds an image of Asia Bibi during a protest rally following the Supreme Court's decision to acquit Bibi of blasphemy, in Islamabad on Nov. 2, 2018. (AAMIR QURESHI/AFP/Getty Images)

If there was any reason to doubt that Pakistan is in thrall of its religious extremists, this week should finally put that naïve notion to rest. It was, even by Pakistani standards, an ugly week on the streets of its major cities as tens of thousands of people marched, and sometimes rioted, to protest the Supreme Court’s decision to overturn the conviction of a Christian woman on blasphemy charges.

Pakistan’s radical preachers fueled the flames of religious intolerance, ignoring the court’s insistence that the decision was made based on lack of evidence and not on the constitutionality of the country’s blasphemy laws. Still, it was a bold move by the Supreme Court judges, though far short of what many human rights activists say is necessary to prevent the abuse of a marginalized community under the pretext of religious sensitivity.

Blasphemy laws have always been dangerous territory for Pakistan’s judiciary, politicians and human rights activists. This case in particular poses some thorny problems. In 2009, Aasia Bibi, a poor labourer from Pakistan’s embattled Christian community, was accused by her fellow Muslim workers of insulting the prophet Muhammad during an argument. The accusation was never properly investigated and the confession Bibi provided to police followed a severe beating. But in Pakistan’s crucible of religious extremism, even the possibility that a member of a non-Muslim religious community had cast aspersions on Islam’s most venerated personality was enough to convict and sentence her to death.

Those who attempted to defend Bibi or question the laws under which she was convicted were murdered by extremists. Others were silenced by fear.

READ MORE: The next, best hope for Afghanistan

This happens often in Pakistan: Blasphemy laws are used regularly to target minorities, settle vendettas and intimidate critics of Pakistan’s extremist preachers. Evidence is rarely an issue; an accusation alone usually suffices to convict a person, though the death penalty has never actually been carried out. Still, since 1990 a disturbing number of people–62–have been murdered because of blasphemy allegations, according to Pakistani human rights groups, more than half of them over the last five years. Those who survive often spend decades in prison which, sadly, is probably the safest place for them. (Bibi, who was released from prison, is now in hiding and plans to leave Pakistan with the help of human rights activists).

It wasn’t always like this. From its founding until the 1960s, Pakistan was a much more tolerant place. But decades of using Islam as a political tool, particularly during the military dictatorship of Zia ul Haq following the Soviet invasion of Afghanistan, has poisoned the country.

“The turmoil after the Aasia judgment is a mere symptom of the deep crisis that has been maturing in the Pakistani state system and society for some time,” says Afrasiab Khattak, a former Pakistani senator. “Because it has supported religious extremism for years, the Pakistani state now isn’t able to stand up to militants, as elements within the state are also radicalized.”

Imran Khan’s victory in July general elections was supposed to be a moment of change for the country. But the former cricket star has proven he has no plan to push back against the radicals’ violent street power beyond feebly threatening “consequences” if they continue disrupting daily life in Pakistan.

During his short six weeks in power so far, Khan has already shown that he is unwilling to challenge conservatives, despite the fact that religious parties only captured around 10 per cent of the popular vote in the elections. In September his government withdrew the appointment of Atif Mian, a member of the persecuted Ahmadi sect, to an economic advisory council after conservatives threatened street protests. Mian, a Princeton professor, is considered one of the world’s most promising economic thinkers. The cancelation of his appointment was a clear sign that Pakistan’s leadership is so frightened of conservatives that they are willing to damage the country to appease them.

Most of the blame falls on the military, which dominates Pakistani institutions: “The state doesn’t enjoy the monopoly over violence as it has sourced out tasks to non-state actors,” Khattak says, referring to the military by a common euphemism in Pakistan. “Production factories of Taliban to export to Afghanistan–including 36,000 religious seminaries–remain unreformed and continue to radicalize Pakistani society.”

The army, for its part, is playing dumb. In a statement issued yesterday, it lamented the fact that it is “dragged” into situations to which it claims it has no connection. “This is a legal matter,” its spokesperson said of the Supreme Court’s decision, “and it is sad that negative statements are being issued against the army.”

Critics, including Khattak, point out that the army has been such a dominant force in Pakistani politics that stepping back and professing innocence now borders on the absurd. But those critics have been steadily silenced. Khattak himself, a prominent columnist and commentator, has had his columns cancelled under army pressure, though he continues to air his views on twitter.

Others have had to flee the country, including Pakistan’s former U.S. ambassador, Hussain Haqqani, and his politician wife, Farahnaz Ispahani. Both were vocal critics of the Pakistani military’s interference in politics and its policy of wielding religious extremists as battle axes against Pakistan’s perceived enemies. In a CBC interview in 2014, Ispahani warned that time was “running out” for Pakistan to bring extremism under control.

“It is escalating to a point where the state can’t stop it if they wanted to,” she said.

Now, the writing is once again on the wall. Radicalization has become so deeply entrenched in Pakistan that it threatens the very foundation of its democracy—the independence of state institutions—despite the fact that only a small fraction of Pakistanis holds radical views. But those who do are dangerous, and Pakistan’s leaders are too frightened to confront them.