Can the Sanfords put the "genie back in the bottle?" 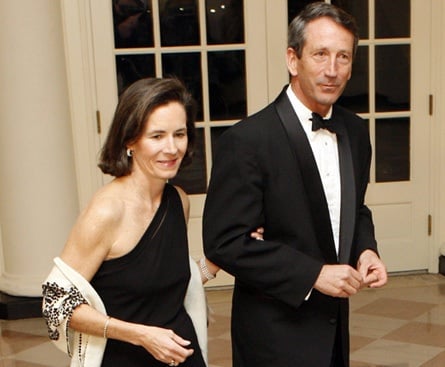 Every marriage is a mystery, often even to its own occupants. But if we know one thing about the troubled union of South Carolina Governor Mark Sanford and his wife, Jenny, based on their indiscreet, passive-aggressive public outpourings, it’s that they have at least one thing in common: a desire to use the media to work through their marital tribulations. The Sanfords communicate through the Associated Press the way other couples text message. Unfortunately for the future of their fragile marriage, their goals appear at odds: he seems hell-bent on getting himself evicted from the 19-year union so he can high-tail it back to the arms of his Argentinean lover; she seems equally determined to keep him firmly wedged in the sacred institution.

Sanford’s original disclosure of marital infidelity on June 24 was unique for its emotional turbulence. As William Saletan astutely pointed out on Slate, the politician violated the first rule of adultery redemption: “minimize the affair.”  If anything, Sanford used the press conference to minimize his marriage, praising his wife foremost as his campaign manager then babbling on about his mistress (later identified as Maria Belen Shapur), whom he referred to as a  “dear, dear friend.”   When he listed the people he had hurt, Shapur was at the top of the list: “I hurt her, I hurt you all, I hurt my wife, I hurt my boys…”

Through this, Jenny Sanford was notably absent as a wifely prop. Two days later she released a statement, much praised for its eloquence, in which she explained she’d asked her husband to leave two weeks previously “to maintain my dignity, self-respect and my basic sense of right and wrong.” A trial separation was agreed upon with “the goal of ultimately strengthening the marriage,” she wrote. It was agreed “Mark would not contact us,” a directive which was clearly not a problem, for the governor would was busy in another form of contact with his South American paramour.

South Carolina’s first lady also used the opportunity to burnish her own cred as a “good wife,” who was no lightweight: “I personally believe that the greatest legacy I will leave behind in this world is not the job I held on Wall Street or the campaigns I managed for Mark or even the philanthropic activities in which I have been routinely engaged. Instead, the greatest legacy I will leave in this world is the character of the children I, or we, leave behind. It is for that reason that I deeply regret the recent actions of my husband Mark, and their potential damage to our children.” She was willing to take him back, provided he was willing to work for it: “I believe Mark has earned a chance to resurrect our marriage,” she wrote.
But then, rather than retreat to the privacy she’d requested, she sat down two days later with the Associated Press to fire off some more poisoned darts. She said she’d known about the affair since January and had previously denied her husband’s repeated requests to visit his lover—that marital red-flag. Still, Sanford expressed shock her husband zoomed off to Buenos Aires after they separated: “I was hoping he was doing some real soul searching somewhere and devastated to find out it was Argentina.” She also used the opportunity to issue a lightly veiled threat: “You would think that a father who didn’t have contact with his children, if he wanted those children, he would toe the line a little bit.”

But Sanford was not only not toeing the line, he was doing his best to catapult over it. In a June 30 interview with AP, he referred to Shapur as his “soul mate”  while also claiming he was trying to fall “back in love” with his wife: “We gotta put the genie back in the bottle.” Lest he’d not nailed the marital coffin tight enough, he volunteered that he’d “crossed the lines” with a handful of other women during his marriage, but never as far as he had with Shapur.

Yesterday, Jenny Sanford emailed a second statement to the AP—again focused on family, God and the institution of marriage. By now, you’d think her girlfriends would have rushed to her side with a bottle of chilled Pinot Grigio and a few firm admonishments: “Honey, enough with the press releases, enough with the interviews.” For once, that clichéd femme self-help title wouldn’t be misplaced: “He’s just not that into you.”

Again, Sanford takes the opportunity to condemn her husband’s behaviour as “inexcusable.” Still, she’s “ready to forgive him for his actions,” invoking both the Psalms and Desmond Tutu for backup. First though, he’s going to have to sweat a bit. Actions have consequences, she writes somewhat menacingly: “and he will be dealing with those consequences for a long while.” (Sanford’s spending the July 4th holiday weekend with his wife and four sons in Florida near his in-laws.)

Jenny Sanford appears to be forging new political ground. She’s not simply forgiving her politically ambitious husband his infidelity, as most political spouses do. She’s leveraging it—tying his political future to the future of their marriage. In yesterday’s statement she appealed to his constituents: “In that spirit of forgiveness, it is up to the people and elected officials of South Carolina to decide whether they will give Mark another chance as well.”  Is this the shrewd calculation of a former campaign manager protecting her candidate’s political future? Or is it an attempted hostage situation? Who knows. Marriages are a mystery that way.