'Canada is back' (just not in Yemen)

Scott Gilmore: Canada is playing both sides in a horrifying civil war in Yemen, arming the antagonists and offering scant aid to the victims 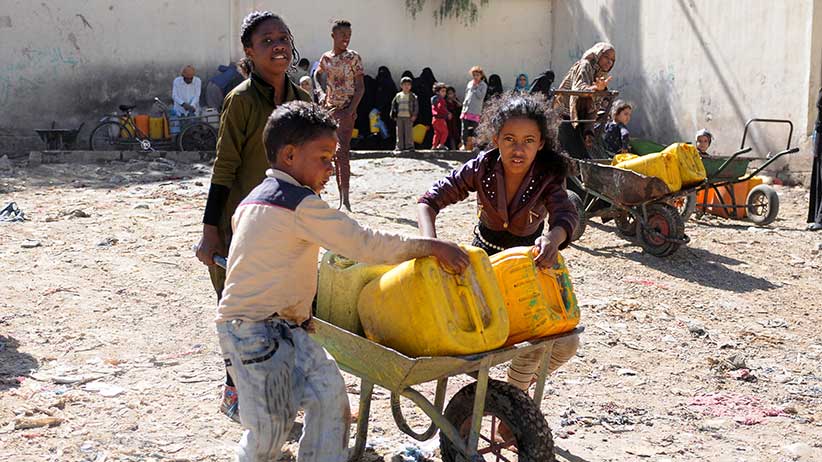 Children help their older sister to move a wheelbarrow carrying jerry cans after they collected clean water from a charity water pipe on Nov. 18, 2017 in Sana’a, Yemen. (Photo by Mohammed Hamoud/Getty Images)

The greatest humanitarian disaster of our lifetime is unfolding in Yemen. The country has been brutalized by war since 2015, and is now suffering through a famine so bad it could kill 150,000 children over the next few months according to the World Food Program. The human brain is not wired to process a number like that—it is easier for us to empathize with the death of a single child we know than hundreds of thousands who merely exist as a statistic in a column. Let me help. Imagine every baby you have seen in the last six months. The ones on Facebook. The ones on the bus. The one crying three seats behind you on the airplane. Now kill them, and every other child in Canada who is under six months old. That is 150,000. That is just the next few months.

Like much of the current chaos in the Middle East, this began with the Arab Spring. Six years ago protesters managed to force out Yemen’s dictator who was replaced by his deputy, Abed Rabbo Mansour Hadi. He inherited a country in disarray. The jobless rate was high, the economy was a mess, as was the government. Taking advantage of Hadi’s troubles, a rebel group emerged from among the country’s Shiite minority. They seized the northern part of the country and gradually marched south, taking the largest city of Sana’a while Hadi escaped to Aden in the far south.

Yemen is mostly desert, and before the war water was already scarce. In fact, the amount of available water per capita is less than two per cent of the global average (Canada is 1,300 per cent). The water table has been dropping, and the conflict has exacerbated that to the point that now half of the population is struggling to access drinkable water.

More than 20 million people are in dire need of humanitarian assistance, according to the United Nations. Sixteen million lack food. Fifteen million have no access to any medical aid. And the fastest spreading cholera epidemic ever recorded has already hit more than 900,000 people. This is how you get to 150,000 children dying in the space of a month.

Canadian ally Saudi Arabia bears much of the responsibility. In an effort to support their Sunni allies, the Hadi government, it has been launching thousands of airstrikes across Yemen for two years now. According to analysis by a coalition of international NGOs, over a third of these destroyed civilian targets, including most of the hospitals in the country.

RELATED: Why Canada should boost its economic ties to Saudi Arabia

Worse, though, Saudi Arabia has enforced a blockade of the country, and last week shut down the last open ports. Even before the war, Yemen had to import 90 per cent of its food, and most of that came by sea. Ostensibly, Riyadh took this move to prevent the rebels from being reinforced by sea. In reality, it is using famine as a weapon.

Canada is not a bystander in this war, in ways both good and bad. Earlier this year, the government designated refugee claims from Yemen for expedited processing, allowing us to take in more people, faster. At the most recent United Nations Human Rights Council, Canada co-sponsored a resolution for an international commission of inquiry to investigate the attacks on civilians. And Global Affairs Canada has announced $42 million in aid this year.

And yet, when the new Liberal government came to power, one of the first things it did was approve the export of $15 billion in light armored vehicles (LAVs) to Saudi Arabia. While there have been promises that these vehicles will never be used against civilians, the CBC reported in August that a video appeared to show the same type of Canadian-made vehicles from an earlier sale being deployed against civilians in Saudi Arabia. We also are sending rifles—last year we shipped $11 million worth. So far this year, that number has jumped by 67 per cent according to reporting by iPolitics. In fact Canada is now the second largest arms supplier to the Middle East.

Nothing is black or white in foreign affairs. No one is always the good guy, or clearly the villain. Nonetheless, it is rare for a country to play all sides as boldly as Canada is in Yemen. We are both arming the antagonists in a horrifying civil war, and offering aid to the victims.

Earlier this year Stephen O’Brien, the UN under secretary-general for humanitarian affairs, told the Security Council that Yemen was the worst humanitarian crisis since the Second World War. And that was before the famine. Surely, if there was ever a moment when Canada could safely pick sides, this would be it?

Our government could, at the very least, start by strengthening Bill C-47 which proposes to tighten up controls over Canada’s arms exports and bring us into compliance with our obligations under the UN’s Arms Trade Treaty. As many observers have noted, the changes are mostly cosmetic and contain loopholes large enough to drive a LAV through. In fact, it would not have prevented the infamous sale of armoured vehicles to Saudi Arabia in 2015. And, faced with a famine that UN staff are describing as “biblical”, we can surely find more than 0.8 per cent of our annual aid budget to help.

This government loves to claim “Canada is back”. If you want to say that and mean it, you have to pay the price. And Yemen is a good place to start.

Scott Gilmore is a member of the Conservative Party, and married to a Liberal Cabinet member

CORRECTION, Nov. 29, 2017: An earlier version of this story said that some of the $15-billion worth of armoured vehicles approved for export to Saudi Arabia by the Liberals have been used against civilians in that country. In fact, other Canadian-made vehicles have reportedly been deployed against civilians in Saudi Arabia. The vehicles being built under the latest contract have yet to reach the country.