This country's weapons sales to Saudi Arabia are scandalous, and recent deals with the Kurds are likely to end in disaster too 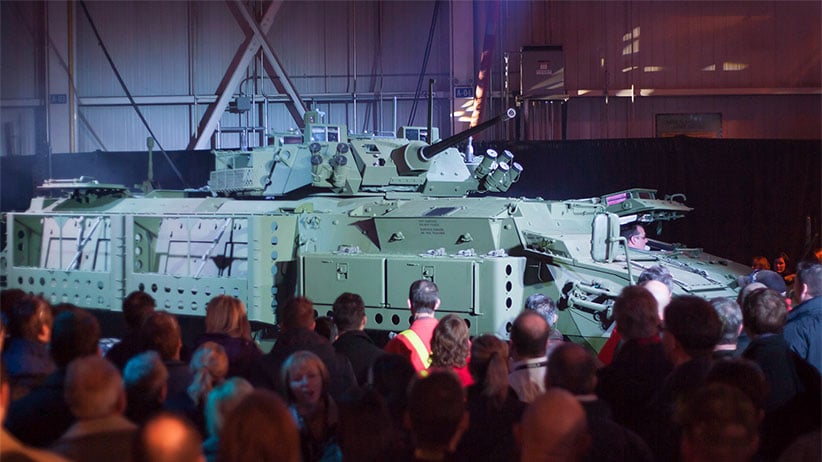 The new upgraded Light Armoured Vehicle is unveiled at a news conference at a General Dynamics facility in London, Ont., on Thursday, January 24, 2012. Mark Spowart/CP

Canadians were not overly surprised last week when video evidence emerged of Saudi Arabia allegedly using Canadian-made armoured vehicles against its own people. The news came and went with the usual proclamations from Ottawa: Foreign Affairs Minister Chrystia Freeland was “deeply concerned,” promising an investigation and action if any “serious human rights violations” are found. Canadians seemed to say okay, and went on with their morning Timmies.

One has to wonder what is meant by “serious,” though—as if minor violations would be acceptable. The problem is, these kinds of responses to questions over Canada’s arms trade have been going on for far too long. Dealing in weapons is a Canadian tradition stretching back to the end of the Second World War. There is a lot of Canadian-made gear floating around in volatile hotspots around the world, and there has never been a proper public debate over why this needs to be.

Indeed, this most recent scandal does not even involve  the controversial $15-billion deal the Liberals inked with the Saudis last year. That deal, negotiated by the Stephen Harper Conservatives but ultimately approved by the Liberals, involves the sale of an undisclosed number of armoured vehicles, reportedly including the LAV III, one of Canada’s most powerful domestically-produced land-based armaments. That in itself is cause for concern.

In the incident in question the vehicles alleged to have been used to attack dissidents from Saudi Arabia’s Shia minority in the country’s east were the somewhat less imposing Gurkha MPVs, produced by Terradyne Inc., based in Newmarket, Ont.

Those vehicles were likely part of older deals dating back years. Canadian-made armoured vehicles were also implicated in Saudi-led crackdowns against Shia protesters in Bahrain in 2011. The Canadian government claims those vehicles were not used to attack civilians, a claim experts say is almost impossible to verify and almost certainly naïve. 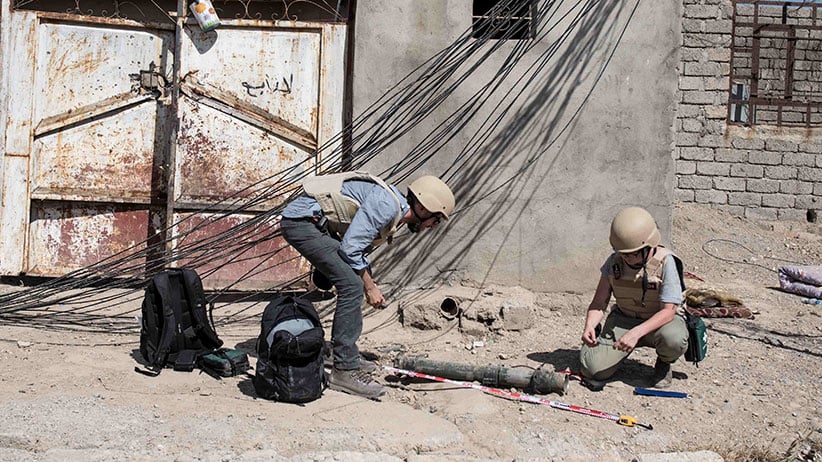 On the hunt for ISIS weapons in Mosul

“When Canada sells weapons to countries with awful human rights records or deep internal divisions, the expectation has to be that at some point they will be used in a manner we would not wish,” says Chris Kilford, a fellow at the Centre for International and Defence Policy at Queen’s University.

Canada has been selling armoured vehicles to Saudi Arabia in large numbers since the early 1990s, according to a 2015 research paper examining Canada’s arms trade, conducted by the University of Ottawa’s Graduate School of Public and International Affairs. Up to 2011, the regime had purchased 2,653 of them, catapulting armoured vehicles to the number one spot on Canada’s arms trade list and making the Saudis Canada’s number two customer for military hardware, trailing the U.S.

The logic behind selling arms to an authoritarian monarchy famous for exporting religious militancy and executing critics is difficult to grasp. Kilford, in his 2010 book, The Other Cold War: Canada’s Military Assistance to the Developing World 1945-1975, argues the Canadian arms industry expanded rapidly after the Second World War, finding ready buyers in a devastated Europe as well as newly independent post-colonial nations swept up in the arms race of the emerging Cold War era. But in the 1950s, as Europe rebuilt its industrial base, demand for Canadian arms began to dwindle, pushing the Canadian government to look for new export markets. At the same time, Canada found itself under pressure from the U.S. and the U.K. to build up the armies of emerging post-colonial nations, particularly in Africa, to counter communist influence.

In the 1960s, Canada took on major military assistance missions in Ghana and Tanzania, Kilford writes. Both had mixed results. In 1968, Pierre Elliott Trudeau put an end to Canada’s military meddling in developing nations. Some argue his opposition was more ideological than humanitarian: Trudeau was fundamentally opposed to militarism in general. And within a couple of years of becoming prime minister, he had reduced Canada’s military assistance to developing countries to near zero.

But by the 1990s, as the post-Cold War era took shape, Canada was back in the game, albeit in a somewhat reduced capacity, according to the University of Ottawa research paper. Demand for arms among NATO partners, Canada’s arms export bread and butter, plummeted as European nations reduced military spending in the absence of the Soviet threat. Canada’s priorities shifted. While arms sales to NATO allies still made up the bulk of the export industry, sales to the Middle East increased to 16.5 per cent from a Cold War average of 13.7 per cent. Hidden in the “small but significant increase,” the paper notes, was a telling bit of detail: sales to Saudi Arabia skyrocketed.

From 1990 to 2001, the Saudi monarchy became Canada’s top buyer of military goods, led by its apparent obsession with armoured vehicles. Immediately following the attacks of 9/11, planned and executed by Saudi nationals, the trade bottomed out. But since 2011, it has picked up again—precisely at the time when the democratic uprisings of the Arab Spring put the fear in authoritarian regimes in the Middle East.

Canada has also revived its military assistance program, pouring hundreds of millions of dollars into Afghanistan, Iraq and Ukraine. The results have again been mixed. While Kilford, who was deployed to Afghanistan as deputy defence attache in 2009, credits Canada’s training of the Afghan army for the close military-to-military ties the two countries enjoy, the weaknesses of civilian institutions have cancelled out the successes. Afghan security forces continue to struggle to bring stability to a country where corruption and a lack of basic services poison the domestic environment.

Iraq has arguably been a bigger fiasco. When the Conservatives launched the advise-and-assist mission there in support of Iraq’s Kurds, they focused their attention on a group of fighters linked to the Kurdistan Regional Government’s Interior Ministry. Canadian diplomats complained to Maclean’s in 2015 that the group, known as the Zeravani, were in practice a politicized militia loyal to the Kurdistan Region’s president, Massoud Barzani, and his political party, the KDP, undermining political stability in a deeply fractured Iraqi Kurdistan.

To make matters worse, Barzani announced in early June that he would be moving forward with Kurdish independence from Iraq with a non-binding referendum on Sept. 25.

The Liberals now find themselves in a politically uncomfortable position. In 2016, Prime Minister Justin Trudeau promised Canada would send arms, including sniper rifles, grenade launchers, and pistols, to the Kurds. Those arms, KDP officials told Maclean’s in early 2017, would be earmarked for the Zeravani, angering members of the rival PUK faction, which fields its own loyal militia. More broadly, if and when the Kurds declare independence from Iraq, Canada will have ostensibly armed the military of a breakaway region. 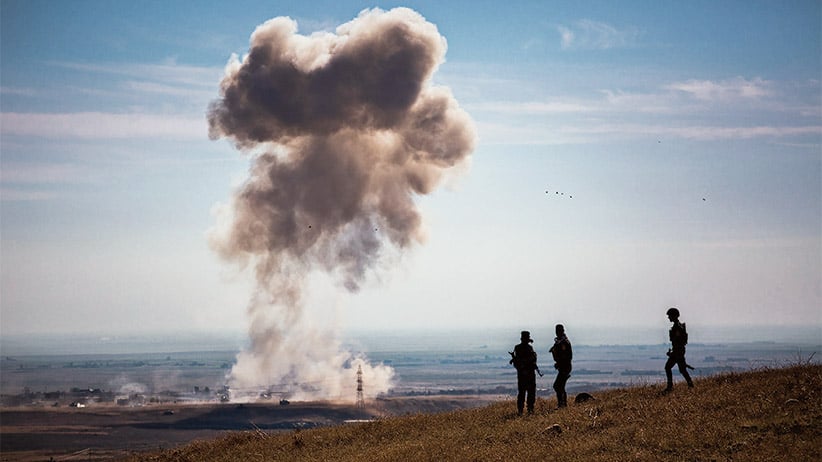 Inside the secret war in Iraq

The mess doesn’t end there. According to a January 2017 Amnesty International report, weapons shipments to the Kurds, which must be funnelled through the central government in Baghdad, have been diverted and used by Shia militia groups known to have committed war crimes in the fight against the so-called Islamic State. The report points to Czech-made rifles, for instance, intended for the Kurds, which were found among Shia militias accused of murdering Sunni civilians. In September 2014, Canada transported ammunition for Czech arms, also intended for the Kurds, from the Czech Republic to Iraq as part of their contribution to the global coalition fighting ISIS.

No direct connection has been made between that ammunition and the weapons used to commit war crimes. But the complexity of the military assistance mission raises some serious questions: Can military supplies be adequately tracked throughout their lifetimes? Can there be any certainty, in a region beset with uncertainties, that at no point will they be used for purposes other than those for which they were intended?

Most military experts agree the answer to those questions is no. The Liberals have tried to delay the delivery of the promised weapons to the Kurds until they can be certain adequate safeguards are in place. As of Aug. 2, military commanders in Iraqi Kurdistan claimed they expect the weapons to be delivered by early September.

What then? Like the sales of armoured vehicles to Saudi Arabia, once weapons are delivered, the ability of Canada to ensure they are used properly, particularly in unstable, authoritarian countries, becomes next to impossible.

Prime Minister Trudeau has argued that the Saudi deal was necessary to prevent Canada from being viewed as a “banana republic” on trade and to protect Canadian jobs. On the other hand, his Liberals seem to enjoy playing the role of world leader on human rights. In the world of arms trading and military assistance, the two ideals often clash.

The time has come for them to choose.

An earlier version of this story incorrectly stated that Canadian-made Gurkhas may have been used against protestors in Bahrain in 2011.