Image of the Week: Beijing unabashedly depicts space exploration as a patriotic and military-led endeavour 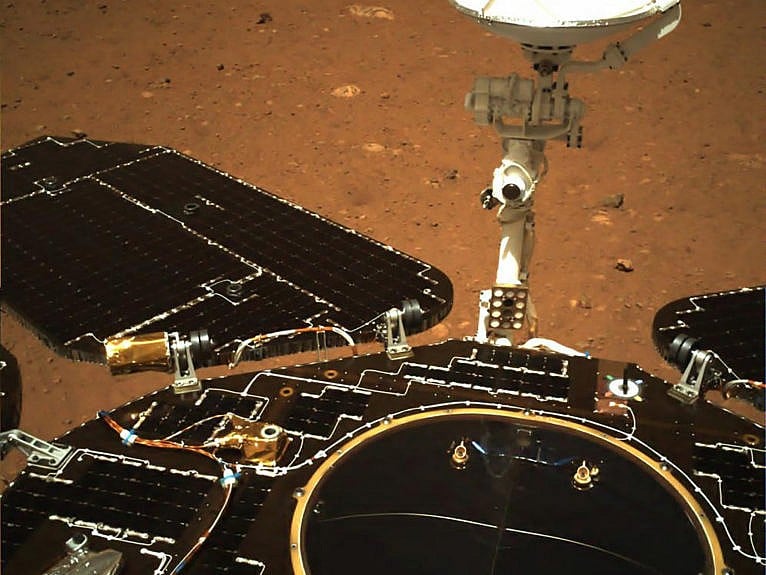 A photo taken by China's Zhurong Mars rover shows solar panels, antennae and the surface of the red planet. China landed a spacecraft on Mars for the first time on Saturday. (CNSA/AP/CP)

This week, the Chinese government proudly unveiled images from its Tianwen-1 mission to Mars. The successful soft landing of the Zhurong rover makes China the third nation to land a spacecraft on the Red Planet, after the two great mid-20th century Space Race rivals, the Soviet Union and United States. It’s telling, perhaps inevitable, that China in 2021 would succeed where powers like Russia and the members of the European Space Agency have failed. According to reports by a U.S. congressional commission, the Chinese government views space exploration as a “tool of geopolitical and diplomatic competition.” Its missions are explicitly patriotic and military-led; President Xi Jinping praised Tianwen-1 for “leaving the mark of the Chinese on Mars for the first time.” China’s multibillion-dollar plans for the future include a new orbital space station around Earth and an exploratory mission to Jupiter. If we are indeed witnessing the onset of a 21st-century Space Race, China’s closest competitors would be the United States and India—both of which have taken markedly more commercial approaches. Yes, Donald Trump famously created the Space Force. But private companies such as Elon Musk’s SpaceX and Jeff Bezos’s Blue Origin are gearing up to make enormous sums of money from eager suborbital tourists. India’s impressive missions have so far been uniquely non-military and internationally cooperative; as of February, the Indian Space Research Organisation has launched 342 satellites for 36 foreign countries. All these different approaches, investments and outcomes leave one wondering: if this is a new Space Race, where’s the finish line?

FILED UNDER: China Editor's Picks Image of the week Mars