Many of the regime's elite have made Canada their home 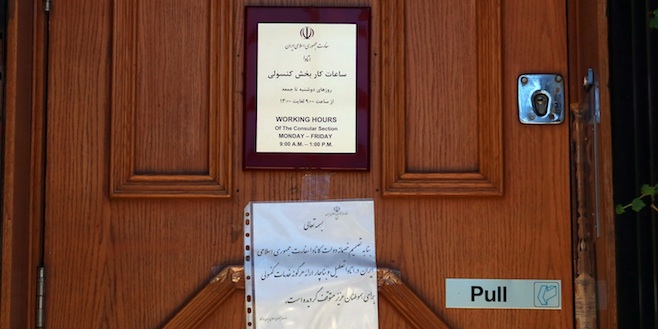 The door of the Iranian embassy in Ottawa is shown on Friday, Sept. 7, 2012. The note on the door reads: "Because of the hostile decision by the government of Canada, the embassy of the Islamic Republic of Iran in Ottawa is closed and has no choice but to stop providing any consular services for its dear citizens." (Fred Chartrand/CP)

Even before Iranian diplomats were ordered to leave Canada on Friday, they weren’t allowed to do much while here. Canada’s relations with Iran were constrained by Ottawa’s “Controlled Engagement Policy,” limiting official contact to discussions on human rights; Iran’s “role in the region”; and the case of Zahra Kazemi, an Iranian-Canadian journalist who was murdered in Iranian custody in 2003. Iran was also officially forbidden from opening consulates and cultural centres outside Ottawa.

There were no bilateral trade deals to negotiate, no intelligence to share, no joint military exercises to plan. Canada and Iran did not even exchange ambassadors. Iranian diplomats were here, in theory, to process visa applications and otherwise help Iranians in Canada obtain government documents And yet Iran posted 17 accredited diplomats to Ottawa, whose numbers were likely swollen by local staff. That’s a lot of people stamping passports.

But of course Iran’s aspirations in Canada were much more expansive. Through its embassy, and the “cultural centre” within it, Iran aggressively reached out to the Iranian diaspora, as well as other sympathetic Muslims in Canada — often flouting Canada’s controlled engagement policy in the process.

Iran opened at least one front cultural centre in Toronto, the “Center for Iranian Studies,” which hid its affiliations with the Iranian government, despite the fact that one of its founding directors was cultural attaché at the Iranian embassy. Concerned Iranian-Canadian academics wrote an open letter challenging the centre’s intentions, non-partisan claims, and academic legitimacy: “We are not aware of any of our colleagues who are engaged in this Centre’s activities. However, functionaries of the Centre regularly contact Iranian student groups with promises of assistance, and fund Farsi classes and/or cultural events.”

The Iranian embassy’s cultural wing also boasted of developing relations with Concordia University in Montreal. Liselyn Adams, who until December was associate vice-president, international, at Concordia, attended a meeting with Hamid Mohammadi, Iranian cultural counselor. She said Mohammadi offered to help support Concordia’s Iranian studies program, including by providing a professor to teach Farsi in it.

This offer was declined. But students and student groups in Canada remained a prominent target of Iranian embassy outreach.

The embassy has worked particularly closely with the Iranian Cultural Association of Carleton University, which is run by Hamid Mohammadi’s son, Ehsan. Earlier this year, it sponsored a conference honouring Ayatollah Ruhollah Khomeini, Iran’s founding dictator. It has funded and organized other conferences in Canada, and has paid for Iranian-Canadians to fly to Iran for propaganda events there. Many Iranian-Canadians who immigrated here to escape the political repression of the Islamic Republic are distressed by Iran’s efforts to extend its influence in Canada. They fear also what might happen to their families in Iran—or themselves if they return to Iran—should they publicize their opposition to the Iranian government.

When announcing Canada’s decision to close its embassy in Tehran and to expel Iranian diplomats from Canada on Friday, Foreign Affairs Minister John Bair cited Iran’s support to the Syrian regime of Bashar al-Assad; its human rights violations, support for terror groups, and nuclear program; and its anti-Semitism and threats against Israel. He did not mention the activities of the Iranian embassy in Canada, though he has previously said he was “concerned” by reports about them.

Shuttering Iran’s embassy in Ottawa will curtail Iran’s influence in Canada, but not end it. The unofficial ties Iran has established here will persist.

While most Iranian immigrants in Canada came here specifically to get away from the Iranian government, lately, many upper class regime-linked Iranians are establishing second homes and acquiring citizenship here. They typically spend most of their time in Iran, while their wives and children live and study here.

Akhavan cited the example of Mahmoud Reza Khavari, former head of Iran’s Melli and Sepah Banks, which the U.S. Department of the Treasury describes as affiliates of Iran’s Revolutionary Guards. Khavari received his Canadian citizenship in 2005 and now lives in a multi-million dollar Toronto mansion. Iranian prosecutors want to question Khavari about his alleged role in a $2.6-billion embezzlement scandal.

“There are numerous other accounts in the Iranian community of the Islamic Republic elite and their families making Canada their home and investing hundreds of millions of dollars in real estate projects in Toronto and elsewhere, spreading their illicit wealth, pernicious influence and menacing networks in our country,” said Akhavan.

Iran has tried to build sympathetic networks through Canadian mosques and religious schools. An anti-regime Iranian friend spent some time in Toronto mosques whose membership—if not leadership—he understood to have ties to the Iranian government. Worshippers there did not know his political beliefs and invited him to social gatherings, one of which was attended by an Iranian deputy minister.

Iran also seeks influence abroad through state-controlled media. Press TV, Iran’s English-language broadcaster, which is run by Iran’s foreign ministry and functions as its propaganda arm, operates here and will presumably continue to do so. Its coverage of Iran’s embassy closure in Ottawa includes an online column informing readers that Canada is being “steadily Zionized,” and that Parti Québecois leader Pauline Marois was probably targeted for assassination because of her party’s pro-Palestinian policies.