Ken Nwadike Jr. is on a mission to repair race relations wherever they're frayed. 'Hugs heal,' he says. 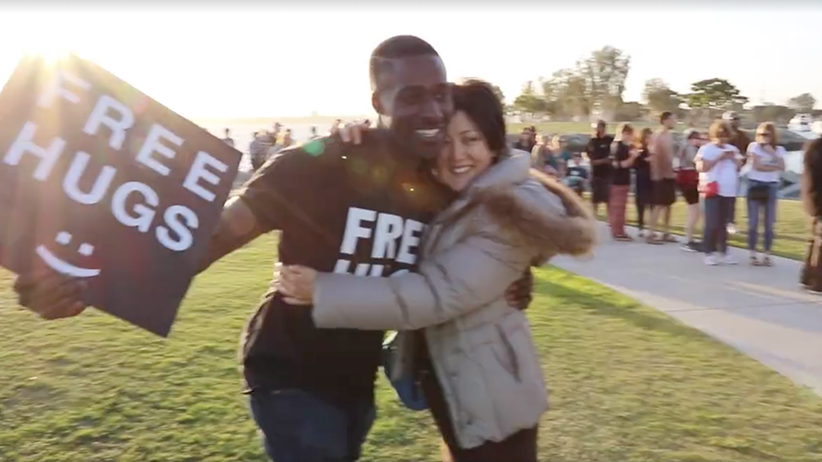 Ken Nwadike Jr. has been told on multiple occasions that hugs don’t make a difference. With all due respect, he completely disagrees.

Earlier this year, Nwadike filmed himself holding a sign offering “Free Hugs” as he approached police officers in Los Angeles. He’s a young black man wearing a black T-shirt—and officers opened their arms wide to embrace, some saying they were hoping he’d come give them a hug.

He then posted the video footage on YouTube with the title Straight Outta Compton — Hug tha Police. “That’s hard for people to digest if they feel there is always hatred for police in the black community,” he says.

Nwadike is the founder of the Free Hugs Project, where he’s willing to embrace anyone he sees at protests and political rallies. At one event for Donald Trump, Nwadike says he broke up one fight where fists were already flying, simply by jumping in with a hug. “Whether it’s a hug or standing between violence, it lets people know violence is not worth it,” he says.

But whether it’s hugging cops or Trump supporters, “I wanted to show the black community and the world that there doesn’t need to be this aggression toward each other,” he says. “It showed people a simple embrace can make people feel better and lower racial stereotypes.”

He’s not suggesting others randomly run into a police officer’s arms to try and hug them. But in scenarios where police are on guard and on high alert, “the more officers can receive that sort of affection from people can lower some of the tension they face—especially in the black community,” he says. “People shouldn’t feel like the police are out to get them.”

At rallies, Nwadike recommends attendees thank the officers for being there to maintain the peace. “Even if you’re marching at a rally against police brutality, talk to the police officers there that are good police officers,” he says. “Maybe record some video of those conversations.”

Hugs aside, Nwadike isn’t naïve about race relations in America. He says he’s been pulled over by the police, in which case his hands never waver from the steering wheel. If the police ask for ID, he asks if he can reach into his back pocket. If they ask for registration, he asks if it’s okay to reach for it in the glove compartment. “No sudden movements. I’ve known since I’ve started driving that I could get shot,” he says. “Sure, people will say it shouldn’t be that way. Well, circumstances have made it that way. History has made it that way.”

Nwadike isn’t oblivious to the risks of approaching strangers in large crowds. He’s a husband and father of three; he worries for his safety. There’s going to be another shooting. There always is. And he’s especially nervous as he prepares to bring his Free Hugs Project to the Republican National Convention. His country was still reeling from the Orlando shooting when Alton Sterling was shot by an officer in Baton Rouge, Louisiana. And then Philando Castile was killed by police in Saint Paul, Minn. And then, during a peaceful protest in Dallas, someone killed five officers and wounded another seven.

Amid the chaos, there was no new policy announcement from any city in America where the African-American community gathered to protest, nor were there any concrete plans from government to fix the fractured race relations between police and the African-American population. But on the morning of July 8, a sombre crowd of Dallas citizens—black, white, young, old—spontaneously approached a line of its officers. And they started to hug each and every one of them.

Nwadike watched the footage and posted it to his Facebook page: “Hugs heal.”