Image of the Week: Communities and individuals are increasingly left on their own to fight the virus, care for the sick and dispose of the dead 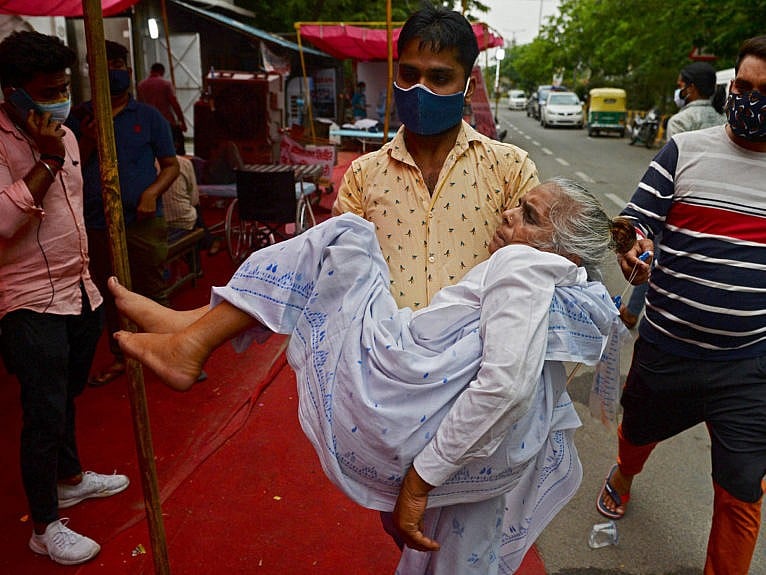 A family member carries a patient having difficulty breathing to a free oxygen support centre run by a Gurudwara, a place of worship for Sikhs, on the outskirts of New Delhi. (Arun Sankar/AFP/Getty Images)

No country may be worse off than India right now. The nation of roughly 1.4 billion people has, since late April, been devastated by COVID-19, with health-care systems failing amid surging death and case counts. The horror peaked on Saturday, when the country revealed a record 4,100 deaths in a single day; its total death toll is near a quarter-million, with more than three million cases still active. Many states have announced lockdowns, putting pressure on Prime Minister Narendra Modi to impose one nationwide, which he has been reluctant to do. (In an unwelcome reprise of events in the United States, he has been criticized for instead holding large election rallies even as cases surged.) Even if Modi acts swiftly, starting now, significant damage has already been done. Hospitals are completely overwhelmed. More than 860 Indian medical professionals have died during the pandemic—116 in the last month alone. Oxygen, PPE and beds are in short supply, leaving COVID victims to die in waiting rooms before being admitted. The result is a situation like the one pictured above: a desperate man carrying a patient to a nearby gurudwara—a sort of Sikh temple-meets-community-centre, where visitors, in normal times, could enjoy a free meal, library, nursery, playground and modest medical aid. These days, gurudwaras offer free oxygen for COVID patients, underscoring the failure of the government and its institutions to take care of the people. When politicians prove themselves unequal to the task of leading, the community must hold itself up, instead.

FILED UNDER: Coronavirus Editor's Picks Image of the week India