Detroit runs out of gas

Paul Wells mourns the Motor City, which has been in decline for longer than anyone wants to recall

In a 2002 column in the New York Times, Elvis Mitchell complained that the Detroit he kept seeing in the movies didn’t look like the Detroit he grew up in. The RoboCop movies were filmed in Houston, and Eddie Murphy’s character in Beverly Hills Cop may have been from Detroit, but Murphy never set foot there. As for Detroit Rock City, about a bunch of kids driving to a Kiss concert, it “seemed to suggest that Detroit was a small enclave in suburban Toronto,” where, in fact, the film was shot.

But that’s precisely what Detroit felt like to a million kids growing up in southern Ontario. I went to high school in Sarnia, three hours west of Toronto and an hour north of Detroit. I had friends whose dads were driving them to Kiss concerts when we were in seventh grade. (Even at that age, I was not the kind of kid who would spend money on Kiss.) Everyone I knew listened to WRIF, the Motor City’s legendary hard-rock station, and worshipped Bob Seger. We were only dimly aware, if at all, of Berry Gordy’s Motown record label, or of the fact that, even then, the Detroit music we listened to was the music of the city’s white minority.

Eventually I learned that, given a choice between Toronto and Detroit for some big event, I’d rather be in Detroit. Tigers baseball games were more intimate and intense at Tiger Stadium than Blue Jays games at Exhibition Stadium. If a band toured through both cities, you’d get way more audience participation in Detroit. In 1984, I saw Art Blakey’s Jazz Messengers perform on a terrace at the Hotel Pontchartrain, then followed the rumour mill to an after-hours jam session a few blocks away. My two schoolmates and I had the only white faces in a packed room.

We were only dimly aware that Detroit was not like other cities, that it was star-crossed and would spread its curse like a contagion to unlucky visitors. Word was spread to anyone driving down to a Tigers game: Make sure you have your directions straight. Don’t go off the path. We’d hear stories, some of them probably apocryphal. A friend of a friend showed too much joy when he won good money at the horse races, got himself followed home from the track and was murdered for his winnings when he pulled over for gas on the way home.

Once in downtown Detroit—hardly a soul in sight on a sunny weekend afternoon—a friend and I paused to watch a guy on a park bench play a desultory game of three-card Monte with a bored mark. Suddenly a police cruiser pulled up and a cop shouted at us for 20 minutes for being anywhere close to such shenanigans. “Mayor Young is glad you came,” the cop said, cooling down after many paragraphs’ worth of imprecations so blue, I could never publish them in this magazine. “He hopes you’ll patronize our many fine merchants. But if you insist on being stupid, you are going to get yourself killed.” The officer and his colleague hauled the guy with the cards away.

Mayor Young was Coleman Young, who led the city’s fortunes for 20 years from 1974 to 1994 and, for the most part, he led them straight down. The population fled to the suburbs. Young’s police chief and deputy police chief both went to jail for stealing more than $1 million each from the police force. Young, at least, stayed out of jail. One of his successors, the convicted obstructor of justice, confessed perjurer and energetic composer of adulterous text messages, Kwame Kilpatrick, has not been so lucky.

All of these memories returned on July 19 when Detroit filed for Chapter 9 bankruptcy, becoming the largest U.S. city by population ever to do so (700,000) and the city with the largest debt ($18 billion or more). Detroit has been on a downward path for more than half a century; its current fiscal distress must be the least surprising denouement any story has had since the appearance of blood at the end of There Will Be Blood. But the scale of the decline is amazing, even to those of us who’ve kept an eye on Detroit’s story all our lives.

The last time I spent any time in Detroit was in 2004, when I played hooky with two colleagues from Paul Martin’s re-election campaign and hightailed it across the Ambassador Bridge to hear James Carter play his saxophone at Baker’s Keyboard Lounge on the corner of Livernois and 8 Mile. Since that night less than a decade ago, Detroit’s population has declined by nearly a quarter of a million souls.

“And it is awful here, there is no other way to say it,” Charlie LeDuff writes in his harrowing and funny new book Detroit: An American Autopsy. “It is an eerie and angry place of deserted factories and homes and forgotten people. Detroit, which once led the nation in home ownership, is now a foreclosure capital. Its downtown is a museum of ghost skyscrapers. Trees and switch-grass and wild animals have come back to reclaim their rightful places. Coyotes are here. The pigeons have left in droves.”

LeDuff, who left the New York Times in 2008 to write for his hometown Detroit News and now works for the city’s popular Fox News station’s local broadcast, is not particularly in the business of handing out blame for Detroit’s fall. The singular boomtown of American heavy industry went bust, is all. The metropolis Henry Ford built made less sense when America stopped making cars for the world. Work moved away, then populations, then hope, then sanity.

LeDuff’s return home, where his brother works in the plants and his sister and her daughter became addicts, can’t really be a homecoming, because the Detroit he once knew—the Detroit I used to visit—has been gone for a long time. LeDuff moved back to a suburb north of the city limits, because he cannot bring himself to raise his daughter in Detroit. His tone is wry, but there is no real hope in it, as he describes a nightmare landscape where arson is rampant, because the girders left after a fire can be sold for scrap metal, or simply because it is cheaper to torch a neighbour’s house than to buy a movie ticket. Call the police if you like; average response times are close to an hour—which means they are often much longer.

Just like the hard-edged but relatively congenial Detroit of my youth, this city has neighbours. Illinois has an unfunded pension liability four times as large as the burden that crushed Detroit. The rest of the American economy is looking maybe a shade better this year than last, but the long-term trends aren’t lovely. “I believe that Detroit is Amercia’s city,” LeDuff writes. “It was the vanguard of our way up, just as it is the vanguard of our way down.”

What does it mean for the other neighbours—for us across the border? Maybe very little, although Windsor hasn’t been looking great in recent decades. Bad policy needn’t hop borders, and bad economics can be contained or partly remedied. Three years ago, Mark Carney was urging Stephen Harper to seek new markets for Canada in Asia, not because of Detroit specifically, but because of the malaise Detroit’s decline symbolizes. Detroit’s downward spiral needn’t hurt us, except in the heart. 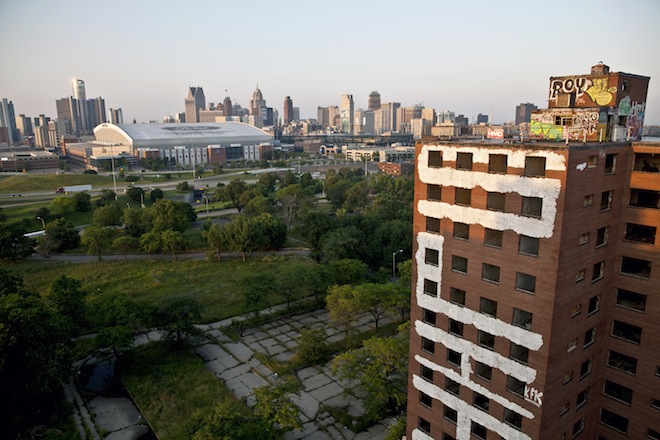 Graffiti-covered buildings stand in the foreground of an overview of downtown Detroit, Michigan the morning after the city filed for bankruptcy, July 19, 2013. (Nathan Weber/The New York Times)