Image of the week: He's held up as saviour of economically ravaged Venezuela, but the man most democratic nations recognize as president has yet to put a firm grip on power 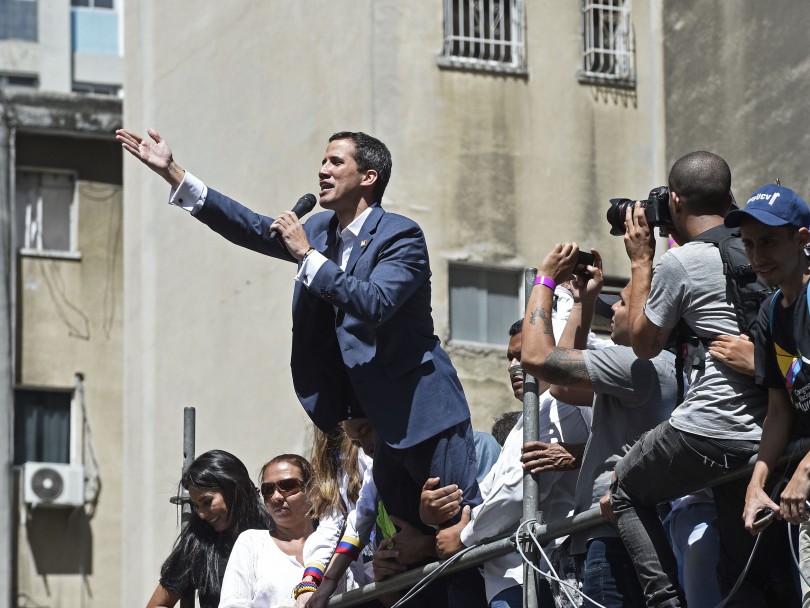 Juan Guaidó, who has been recognized by Canada, the U.S. and numerous other countries as Venezuela's interim president, speaks during a rally in eastern Caracas (Federico Parra / AFP/Getty Images)

Imagine, for a moment, that American Republicans, after losing their majority in Congress in the 2018 midterm elections, defiantly formed another Congress, calling it Congress 2. Outraged Democrats then boycott Congress 2 elections, leaving Republicans to win all Congress 2 elections by default. Nancy Pelosi, head of the original Congress, proclaims herself as president of the United States in defiance. That’s essentially what’s happening in Venezuela, after Nicolas Maduro’s crumbling presidency squandered the country’s rich natural resources and drove the Venezuelan economy into the dirt. Inflation has skyrocketed the price of basic goods beyond affordability, fuelling corporate corruption and common theft. To all but the most committed Maduro supporters, the only realistic way out now lies with Juan Guaidó, the Pelosi in the above scenario—though, really, he’s more often compared to Barack Obama, both for his suave looks and optimistic speeches. Guaidó, who leads a centrist socialist party, has earned the support of virtually every powerful democratic nation, including the U.S., most of Europe and Canada. (Though notably not Canada’s NDP, who are vaguely siding with Maduro supporters who equate Guaidó’s self-appointment with a coup.) Guaidó is being held up—literally, in this photo—as the lone saviour able to deliver Venezuelans from their hellish situation into a prosperous future. But the fate of his quest—and his country—still hangs in the balance.