Donald Trump flops and flubs and goes after Canada

The U.S. President called Canada's dairy policy a disgrace. He also offered some thoughts on NATO and his dead friend Pavarotti. 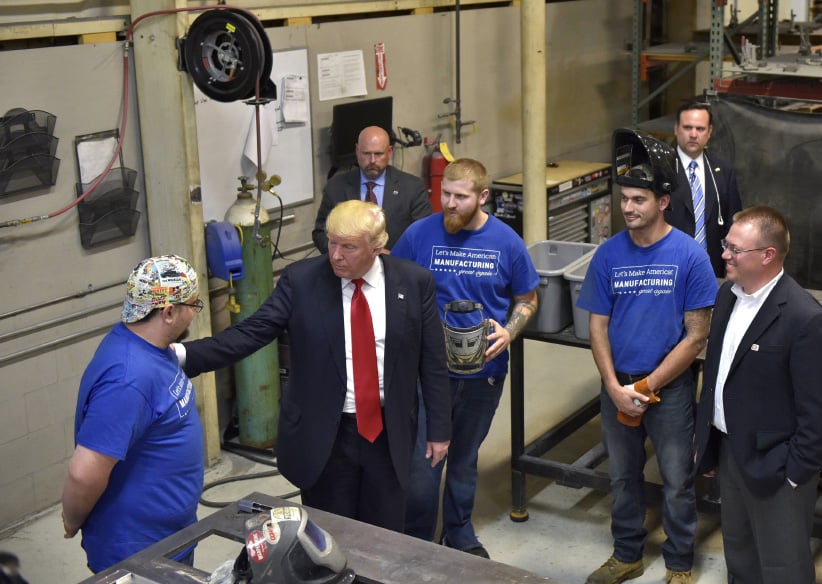 Curdled with anger at what he called Canada’s “disgraceful” treatment of American dairy farmers—not to mention “lumber, timber, and energy,” which he also mentioned—U.S. President Donald Trump vowed Thursday morning to “get to the negotiating table with Canada very, very quickly” to rectify what he called, rhymingly, “another NAFTA disaster.”

Speaking in the Oval Office as he signed a memorandum demanding that the Department of Commerce investigate the importation of Chinese steel as a potential threat to U.S. national security, the humble Trump apologetically riffed—“I wasn’t going to do this”—on what he claimed were Canadian government policies that have been castrating hard-working American dairymen along the northern tier of states.

Trump’s tirade, which came only two months after he beamed about his country’s “very outstanding trade relationship with Canada,” seemed to refer to several dozen Wisconsin farmers who recently complained to their state and Congressional representatives about Canadian policies that make it difficult for them to sell ultrafiltered milk to cheese and yogurt processors across the border. It was unleashed only one day after Prime Minister Justin Trudeau waved off the president’s first mention of the problem, telling Bloomberg News “It’s politics.”

“Let’s not pretend we’re in a global free market when it comes to agriculture,” Trudeau said in an interview published Wednesday. “We have a supply management system that works very well here in Canada. The Americans and other countries choose to subsidize to the tune of hundreds of millions, if not billions of dollars, their agricultural industries including their dairy.”

On steel, Trump said that U.S. production “is not an area where we can afford to become dependent on foreign countries. We have a product where we actually need foreign countries to be nice to us in order to fight for our people. And that’s not going to happen any longer, believe me—especially as it comes to steel.”

Thursday’s anti-Canada rhetoric came late in a week of Trumpian foreign-policy flips, flops and flubs. Later in the day, the president held a press conference with the Prime Minister of Italy at which Trump reaffirmed his principled, fervent, week-old support for NATO and the integrity of the European Union—positions that contradict almost everything he said on the campaign trail about globalism and international entanglements. Trump also iterated his ardent amore of all things Italian ”from Verdi to Pavarotti, a friend of mine. Great friend of mine.”

Luciano Pavarotti passed away in 2007. Last year, when the late, great tenor’s soaring rendition of Puccini’s Nessun Dorma  was played to rouse the crowds at Trump’s campaign rallies, Pavarotti’s widow issued a statement of strong protest, declaring that “the values of brotherhood and solidarity which Luciano Pavarotti expressed throughout the course of his artistic career are entirely incompatible with the worldview of candidate Donald Trump.”

The Italian Prime Minister, Paolo Gentiloni, a former newspaper publisher and member of the Workers’ Union for Socialism who has been in office only one month longer than Trump, praised his nation as “a country of dialogue. We are proud because we succeeded in keeping open the doors in difficult crises. Dialogue can be useful even vis-à-vis Russia.”

Trump, who will travel to Sicily next month for a G7 summit—down from G8 following the 2014 relegation of Vladimir Putin—showed no reaction to Gentiloni’s use of the R-word, fiddling with his earpiece as the Italian’s words were translated, keeping himself from shouting “WRONG,” as he did in his debates with Hillary Clinton.

Pressed on one of Trump’s favourite talking points—that every NATO member commit two per cent of its Gross Domestic Product to the military, which is twice as much as the Roman legions currently enjoy—the Prime Minister smiled that “Italy has certain limitations when it comes to its budget.”

Trump’s outburst also came on a day—the famous, infamous 4/20—when, at the stroke of what they dubbed “high noon,” several pro-marijuana activists were arrested on Capitol Hill after handing out free tokes to congressional staffers, giving new meaning to the phrase “joint session.”

For his part, the teetotalling Trump also has abjured recreational pot—and has ordered his Department of Justice to continue to enforce federal laws against sale and possession—a sharp divergence from his predecessor.