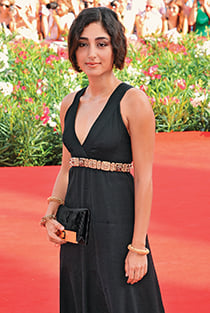 Golshifteh Farahani would have to choose between her country and her art—that much was clear even before the ayatollahs invited the Iranian film star to stay away from her homeland. It was retribution for baring her breast eight months ago in a video to promote the Césars, the French equivalent of the Academy Awards. But Farahani had already been banned from working in her homeland and fined $2.5 million for failing to wear a hijab at a Hollywood premiere. She’d been living in France for four years, a de facto exile.

The 29-year-old phenom has since come to embody the self-spiting nature of Tehran’s moralism and its growing distance from the liberal-thinking world. Celebrated before the hijab incident for her success in Western cinema, Farahani was a national icon whom Iranians had watched grow up on the screen. Her breakthrough performance at 14 in The Pear Tree set the table for a whirlwind rise in her own country, while opening doors abroad. Her roles include the lead in M for Mother, where she played a pregnant woman who had been gassed during the Iran-Iraq war, and a starring turn opposite Leonardo DiCaprio in Body of Lies, a CIA thriller directed by Ridley Scott (it was the first appearance by an Iranian woman in a Hollywood film since the Islamist revolution of 1979). Versatility is Farahani’s meal ticket: she can summon smouldering heat or emotional isolation with equal alacrity—in the same scene, if necessary.

Will the international release this week of About Elly, Farahani’s latest film, directed by her compatriot, Asghar Farhadi, about the complex social dynamics hidden in the lives of middle-class Iranian families, give Tehran pause? Likely not. In the wake of the Césars scandal, the actress was denounced in government statements as the “hidden, disgusting face of cinema.” Her parents in Tehran got a phone call in their apartment from a man who identified himself as an official with the supreme court of the Islamic Republic, and who yelled over the line that their daughter’s breasts would be cut off and brought to them on a plate.

Farahani seems conflicted by her unsought status as Iran’s most recogizable dissident. “I hate politics. It is not my job,” she told the Guardian recently. “As always, something you do for nothing becomes political.” Her family has been ostracized by pious strangers and clerics alike, she notes, to the point that her father, a theatre director, was admitted to hospital amid threats to his safety. Even so, she’s glad the controversy has become a touchstone for the country’s liberal youth, highlighting divisions within Iranian society that the government would just as soon paper over. She watched with gratitude as supporters rushed to her defence on web chat rooms and on Facebook, voicing dismay at the regime’s knee-jerk repression.

“The good thing is it started a huge debate that could never have happened before,” she said. “There were lots of fights within families. Young people especially saw who they were through this debate, and they saw the reality of the people they were trusting in.”