An interview with the UN High Commissioner for Refugees’ Ottawa representative 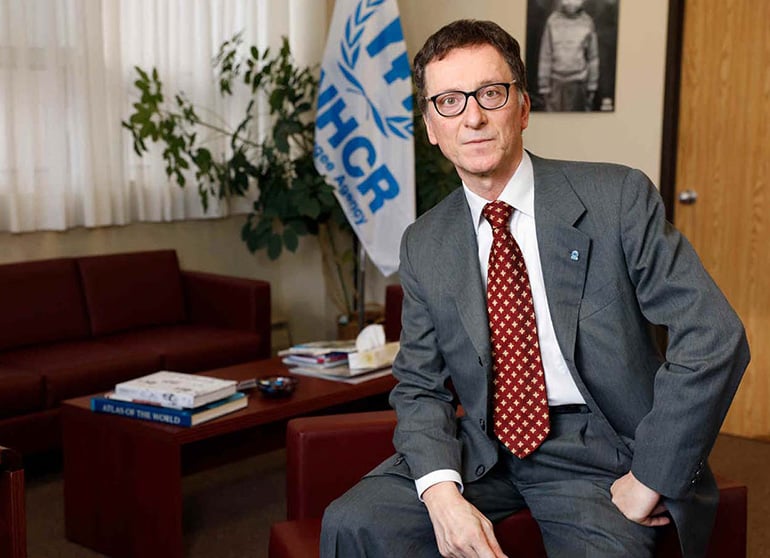 Furio De Angelis has spent nearly three decades working for the United Nations High Commisioner for Refugees (UNHCR), with postings in Afghanistan, Turkey, Sudan and Kenya. Now the agency’s representative in Canada, he will be a key point of contact for Justin Trudeau’s Liberals as they attempt to fulfill a central campaign promise: welcoming 25,000 Syrian refugees by the end of the year. Although the details aren’t yet clear, most of the asylum-seekers will be “government-assisted”—those deemed most vulnerable by the United Nations, and whose first year of living expenses will be paid for by Ottawa.

Q: The violence in Syria has triggered the worst humanitarian crisis since the Second World War. More than four million people have fled the country, and nearly eight million others are displaced inside. How do you even begin to describe such chaos?

A: The Syrian crisis is a real tragedy. The country had an advanced educational system and a relatively large middle class. It is now totally in ruins, a battleground of sectarian violence fuelled by foreign interests. So it is no surprise that we are witnessing this mass migration to Europe, because after four years of exile, refugees have exhausted their savings, they no longer have coping mechanisms, and they are just looking for a place to survive and bring their family. Unfortunately, they have taken great at risks, as we know. More than 3,500 people have perished at sea this year.

Q: Is it the goal of the UNHCR to resettle every displaced person?

A: It’s very important to understand that resettlement is not a solution to a humanitarian crisis. Only a political solution can restore peace and allow the majority of the refugees to return home. Resettlement is a limited program. In 2014, only 73,000 refugees in the world were resettled to 30 countries—and we have 15 million refugees in the world. So it is a limited program that allows the most vulnerable among the refugees to find a durable solution in another country.

Q: What criteria does the UN use to select those very few who qualify for resettlement?

A: These are not the refugees who arrive spontaneously at borders—for instance, the 800,000 who are moving through Europe. That has nothing to do with resettlement. Resettlement is an organized program in which Canada, U.S.A., Australia and other countries organize the departure of refugees from a region. In order to do this, UNHCR and the 30 resettlement countries have established international criteria based on vulnerability. These are special categories of people who cannot remain in suburban conditions in Amman or Beirut, for example, because they are families without income, women alone with children, victims of sexual and gender-based violence, victims of torture, the elderly. These are all situations that distinguish them from, let’s say, the larger group of refugees who may have more coping mechanisms, more capacity, to live a refugee life.

Q: While deciding which refugees are the most vulnerable, does the UNHCR do security checks?

Q: Prime Minister Justin Trudeau is committed to bringing 25,000 Syrian refugees to Canada by the end of the year. What does that type of commitment mean to an agency scrambling to accommodate the most vulnerable?

A: This is actually what our high commissioner, António Guterres, has been asking for the last several years—with increasing alarm and increasing apprehension. The scale of the needs we have seen requires a different government approach, a different scale of response, and this is exactly what Canada’s new government has just done.

Q: Do you know, at this point, what the breakdown will be among the 25,000, between government-assisted and privately sponsored?

A: This has not been announced by the government. For us, we are ready. The pool of refugees in need of resettlement is very large, and although 25,000 is a very good program and we are delighted by this announcement from the government of Canada, the pool of refugees is larger. We need other countries to follow suit and see that Canada is taking the lead in that respect.

Q: Do you have to temper expectations among the refugee population in the region? I’m sure many have heard about Canada’s promise and are hoping to be among the lucky 25,000.

Q: The terrorist attacks in Paris have raised some difficult questions. French authorities have confirmed that one of the suicide bombers entered Europe through Greece using a Syrian passport—evidence that the plotters exploited the unprecedented flow of migrants to further their plan. Some Canadians, including the premier of Saskatchewan, are now calling on Trudeau to halt his refugee plan in light of the attacks. What do you say to those people?

Q: Should Canadians be concerned that some of these inbound Syrian refugees may actually be ISIS terrorists?

A: These are statements that would have to be explained rationally. Refugees actually are escaping from terror and from terrorists and from wars and from persecution, so creating a linkage between the two things is actually defeating the entire understanding of who is actually making war and who is escaping war. Confusing the victims with the perpetrators of the violence that creates the victims, it’s irrational. It’s not logical.

Q: Are you saying that before Canadians jump to conclusions, they need to understand the difference between a vulnerable refugee identified by the UNHCR—someone languishing in a camp in Turkey, Jordan or Lebanon, for instance—and a migrant who has managed to make it to Europe?

A: Absolutely. When we are talking about vulnerable categories we are talking about women with children, families without fathers anymore, people who have been victimized by violence. If we have a young mother with a small child, and people are saying there is a connection with terrorists, it’s a bit irrational. We have to be careful not to get carried away with the emotions of this terrible moment. It’s an irrational response.

Q: Is it critical that the Liberal government transports all 25,000 refugees by the end of the year? Or would the UNHCR be just as grateful if they arrived here over the next 12 months, for example, in order to allow for even more thorough security checks?

A: That will be up to the government to analyze this situation and make the most appropriate decisions. We’ve said from the very beginning that this is a very welcome initiative and an example to the entire world—and we will do it step by step, side by side, and shoulder to shoulder with the government. If the decision of the government will be different in terms of the calendar, UNHCR will continue to contribute to this important program. It has to be done well so it will create a model for other countries to follow.

Q: The Syrian refugee crisis became a key issue during the election campaign, with many attacking former prime minister Stephen Harper for not doing enough. In 2013, his Conservatives pledged to resettle 1,300 Syrian refugees, a promise that was boosted by 10,000 in January 2015, for a total of 11,300. That was followed by a campaign pledge to add 10,000 Syrian and Iraqi refugees on top of that. What was the reaction inside the UNHCR to those numbers?

A: At the time, we officially welcomed the commitment because it represented a real solution for 11,300 refugees. At UNHCR, we are always trying to make the point that behind all these figures we say so easily—11,000, 25,000—there are real people, real women and children, real flesh and blood. So when the government of Canada said we’re going to have 11,300 refugees, that means 11,300 real people had found a solution. So of course we welcomed that. But now we have a different situation. Now we have a government that has taken a different approach: an approach that really brings to the forefront the urgency of this humanitarian situation, an approach that wants to lead by example.