Is Greece's real fallout yet to come? 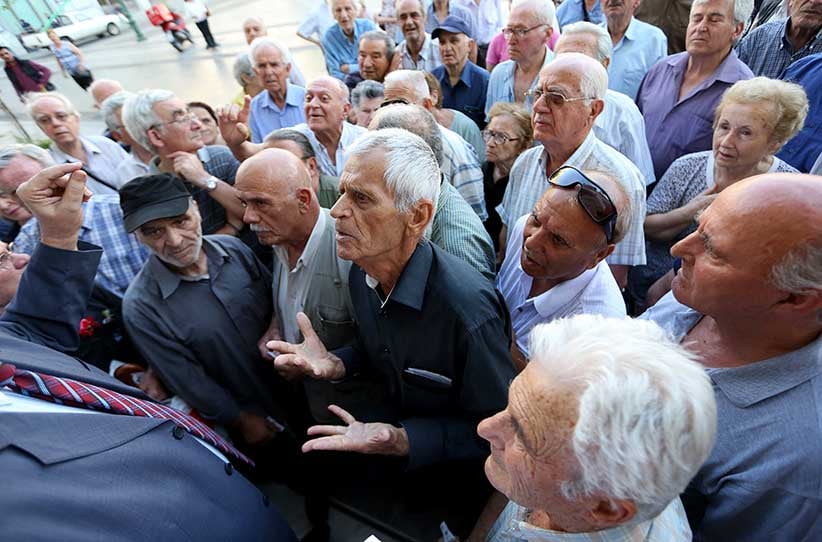 Pensioners argue with staff outside a bank in Athens. (Chris Ratcliffe/Bloomberg/Getty Images)

Yellow-vested workers methodically dismantled the giant, glowing “euro” sculpture outside the former headquarters of the European Central Bank in Frankfurt earlier this week—one day after Greeks voted “No” to a proposed bailout needed to keep the tiny, debt-swamped Mediterranean country from going bankrupt. Though the maintenance work had been previously scheduled, the symbolism of it all was difficult to overlook.

Greek Prime Minister Alexis Tsipras claimed he called the surprise referendum so he could extract a better deal from the European creditors who have propped up the country to the tune of $335 billion since 2010. But so far the bold gambit has done little more than inject more bitterness into an already tense process, with one ECB council member saying Greece “has just voted itself out of the eurozone.” In an apparent effort to diffuse the tensions he deliberately inflamed, Tsipras cut loose his combative finance minister, Yanis Varoufakis, a self-described “erratic Marxist” who shaves his head, rides a motorcycle and has likened the austerity demands of Germany and other creditors to “fiscal waterboarding.”

Greece’s strategy appeared designed to force the hand of the so-called troika, the name given to the ECB, the International Monetary Fund and the European Commission, which have been coordinating Greece’s bailout. If Greece is on ﬁre, the thinking seemed to be, Europe would have no choice but to come running with additional buckets of cash to put it out—no strings attached. But while the gambit did indeed result in an emergency summit (albeit one to which Greece was accused of showing up without any proposals), it came at the expense of making Greece’s already dire situation that much more precarious. In the absence of a new funding deal to replace the one that expired June 30, Greece became the first developed country to default on an IMF loan payment and was forced to close its banks, limiting ATM withdrawals to just $84 a day. An economic policy of scorched earth, in other words.

It’s merely the latest example of how poorly the Greek debt crisis has been handled from the start. While Greece has made strides toward reducing its budgetary deficit, and therefore stabilizing its crushing debt-to-GDP ratio of 177 per cent, precious little has been done to tackle the country’s core economic problems, ranging from corruption and cronyism to a bloated public sector and chronic inability to collect taxes. But European officials must also shoulder some blame for their role in contributing to Greece’s woes—both for allowing their banks to funnel billions in loans into the country during the boom years and then sticking doggedly to the idea of austerity even as Greece’s economy collapsed. “Since 2010, the GDP of Greece has shrunk by more than 25 per cent and real wages have gone down by more than 30 per cent,” says Kurt Hübner, a professor of European studies at the University of British Columbia. “Greece tried to use medication they got from their doctors, but the medicine didn’t work.” The real fallout from the crisis, then, could be yet to come.

What’s striking about the 19-member eurozone’s latest Greek emergency is that the two sides aren’t actually that far apart when it comes to numbers. Earlier in June, the Tsipras government tabled a proposal that would have seen the government come up with another $11 billion over the next few years through a mix of tax hikes and spending cuts—about the same as creditors had been calling for. Where the two sides disagreed, however, was how Greece should get there. In general, the creditors wanted less spending while the left-wing Tsipras government wanted higher taxes, preferably targeting the wealthy. For example, Greece has been slow to move on pension reforms like raising the effective retirement age to 67, compared to an average age of about 61 now. Similarly, it has been hesitant to raise its value-added tax, among the lowest in the EU, and do away with special exemptions for the Greek islands, which are tourist hot spots. 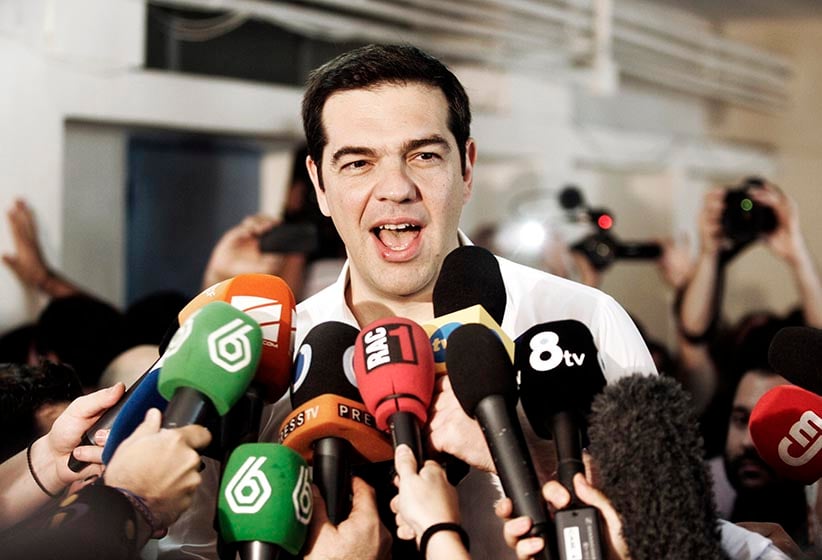 An even bigger concern is Greece’s abysmal record in collecting the money it’s actually owed. By some estimates, Greece has lost out on nearly $112 billion worth of tax revenue, mostly since 2009—a number that could go a long way to fixing the current debt crisis. The problems are both structural and historical. In addition to Greece’s weak collection system, roughly one out of every three workers is self-employed, making it impossible for the government to deduct taxes directly from the source for many workers. Greece’s huge shipping industry also figures prominently, since it can easily take advantage of flags of convenience in low-tax jurisdictions. And there’s a well-documented cultural aversion to the taxman that’s believed to have originated under four centuries of Ottoman rule. Efforts to boost government revenue have involved everything from tacking property taxes onto electric bills to using Google Earth software to count the number of backyard swimming pools, which are viewed as an indicator of wealth; they expose potential deceit in what residents report as income. “There’s a total mistrust of government, and the modern governments have done nothing to earn trust,” says Theodore Peridis, an associate professor at York University’s Schulich School of Business. “There’s no respect for authority.”

Corruption is also endemic. Fakelaki, or “little envelopes,” permeate Greek life as citizens seek to grease the wheels of government bureaucracy, helping them obtain everything from cancer care to building permits. Peridis jokes that being stopped by a policeman in Greece tends to be viewed as the beginning of a negotiation, as opposed to the endpoint of a transgression. He adds that the economy, which relies heavily on tourism, shipping and the export of refined petroleum, fruits and (of course) olive oil, also suffers from a lack of entrepreneurialism in a country where jobs are often exchanged for votes. (What’s often overstated is the stereotype of Greeks as being lazy workers who sit around waiting to collect rich government pensions. OECD numbers show Greeks work the longest hours of any country in Europe, albeit at lower productivity levels, and take fewer holidays than workers in Germany, France and Sweden.)

Given Greece’s unique challenges, it’s little surprise, then, that the harsh austerity program championed by German Chancellor Angela Merkel has failed miserably to pull Greece out of the fire. While Greece has managed to achieve a primary surplus in its budget (before the cost of servicing its considerable debts), the steep cuts have triggered an economic collapse that has made the country’s debt burden that much heavier. Without a thriving export industry, Hübner says, cutting wages did little to boost business activity. “It’s not like their price competitiveness is increasing and there’s some kind of automatic growth.” Hence, any serious plan to keep Greece in the eurozone—which, despite statements to the contrary, remains the preferred strategy, since a “Grexit” would create all sorts of complexities nobody wants to entertain—will require the Syriza party’s government to make difficult structural reforms. By the same token, creditors may need to show a willingness to adopt more growth-minded policies such as investment in infrastructure. 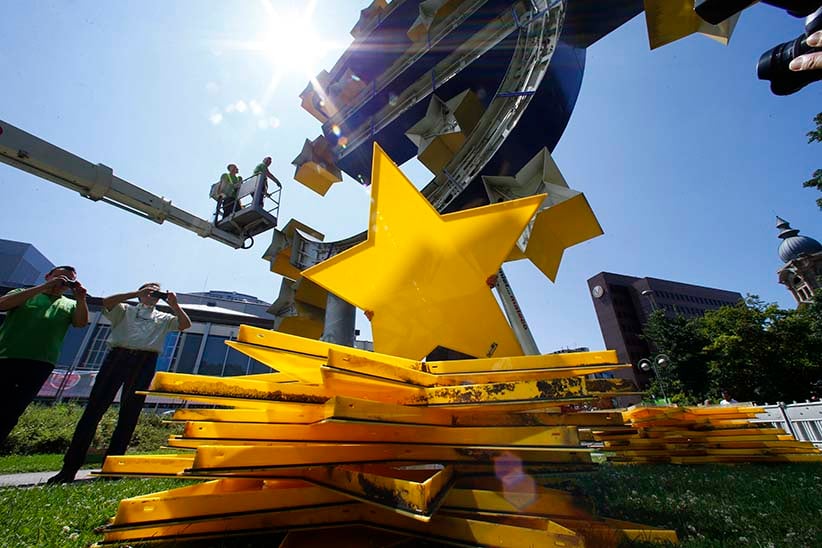 A sculpture of a Euro sign comes down. (Ralph Orlowski/Reuters)

Creditors will also need to cut Greece some slack on debt repayment. Even the IMF now admits as much. While allowing Greece to walk away from some of its obligations has so far been anathema for politicians like Merkel, the flinty fiscal approach favoured by Germany comes much easier to the eurozone’s biggest economy than it does its neighbours. In many ways, Europe’s sovereign debt crisis was a boon for that country, which benefited from rock-bottom borrowing rates and a depressed euro that made its myriad exports, everything from BMW sedans to Miele dishwashers, more internationally competitive. Moreover, as French economist Thomas Piketty recently pointed out, Germany is hardly in a position to lecture Europe on the virtue of paying off debts in full, having failed to do so itself following both world wars. “The Greeks have, without a doubt, made big mistakes,” Piketty said in a recent interview with the German newspaper Die Zeit. “Until 2009, the government in Athens forged its books. But despite this, the younger generation of Greeks carries no more responsibility for the mistakes of its elders than the younger generation of Germans did in the 1950s and 1960s. We need to look ahead.”

Greece’s banks are fast running out of cash and a $4.9-billion loan payment to the ECB is due July 20. “I say this isn’t a matter of weeks, but of days,” said Merkel of the need for a new deal to keep Greece afloat. For everyone’s sake, let’s hope any proposals put forward are profoundly different from Greece’s previous bailout programs. The dilapidated euro sculpture in Frankfurt’s financial district isn’t the only thing about the monetary union that’s so obviously broken.