“It wasn’t long before we were flooded with cholera patients” 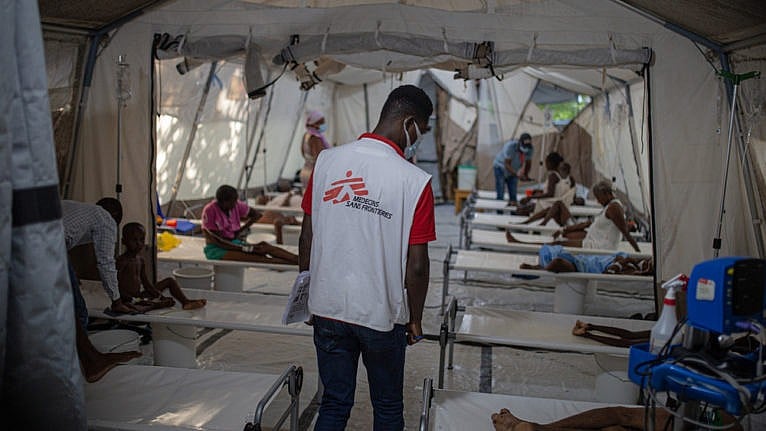 I’m a registered nurse with a master’s in public health, and I’ve been working with MSF in Haiti on and off since 2008. From my perspective, things have never been quite as bad for the people of Haiti as they are right now.

In the summer, we saw a major upswing in patients who had suffered violent trauma in our emergency rooms. Between June and mid-October, we had more than 2,148 reported cases. At one point during that time, we treated 80 people with gunshot wounds in the span of just 72 hours. Things got even more complicated in September because of a fuel shortage, and Haiti went into what they call “pays lock,” which means “locked country.” There were road blockages and protests, and circulation had almost come to a complete stop. If all that wasn’t enough, we began receiving patients with cholera symptoms at the end of September. So far, we’ve seen 6,185 cases in our treatment centres. 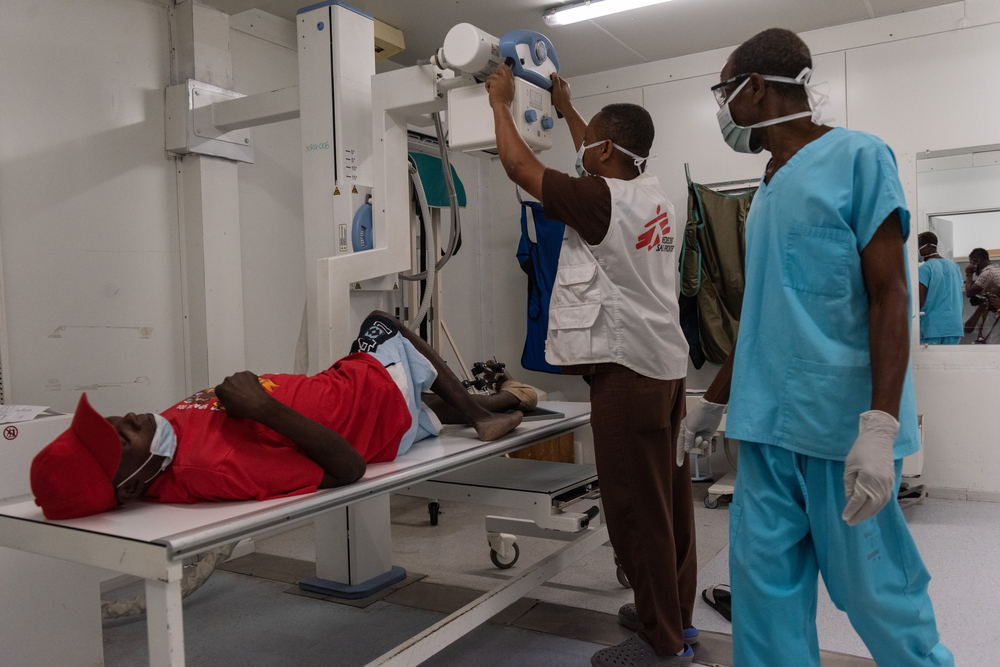 MSF radiology technicians performing an MRI on an outpatient

In normal times, my role is to ensure that MSF’s various medical projects in Haiti are running smoothly. My days are usually spent in the office behind a computer, visiting our projects, attending meetings or lending a hand in clinical settings if needed. But in September, due to safety concerns, I was often unable to leave my apartment and was forced to work from home. In the distance, I could sometimes hear protests on the streets and heavy gunfire. It was always far enough away that I never felt like my life was in danger, but I knew something terrible was happening and many more people would need medical help.

I’ve seen people wounded by stray bullets, and I’ve seen patients whose wounds were infected because they couldn’t access medical care immediately after being injured. MSF field coordinators try to ensure our projects can operate safely in violent areas. We have guards at the door, but they’re unarmed. We don’t believe in arming people, because more guns equal more problems.

We were able to identify the very first cholera case in the country when a young girl came in with severe diarrhea and vomiting. We were able to isolate her thanks to the COVID isolation tent we set up in the parking lot, and thankfully she survived. We found another case around the same time when a father brought his sick daughter to a different treatment centre and informed us his son was also sick at home. Both children tragically passed away. It wasn’t long before we were flooded with cholera patients. As of October 26, we had 340 cholera beds across our five MSF sites—all of which were over 100 per cent capacity. We still don’t know how this new outbreak occurred, and we probably won’t know for quite a while.

With cholera, physical separation is incredibly important, and you want to avoid cross-contamination inside a medical centre at all costs. The most effective way to kill cholera is with chlorine, so we have different concentrations of chlorinated water that we use to wash our hands, surfaces, the shoes we wear into the isolation tents and so on. The disease doesn’t spread through respiratory droplets, but we wear masks because COVID is also still a concern. 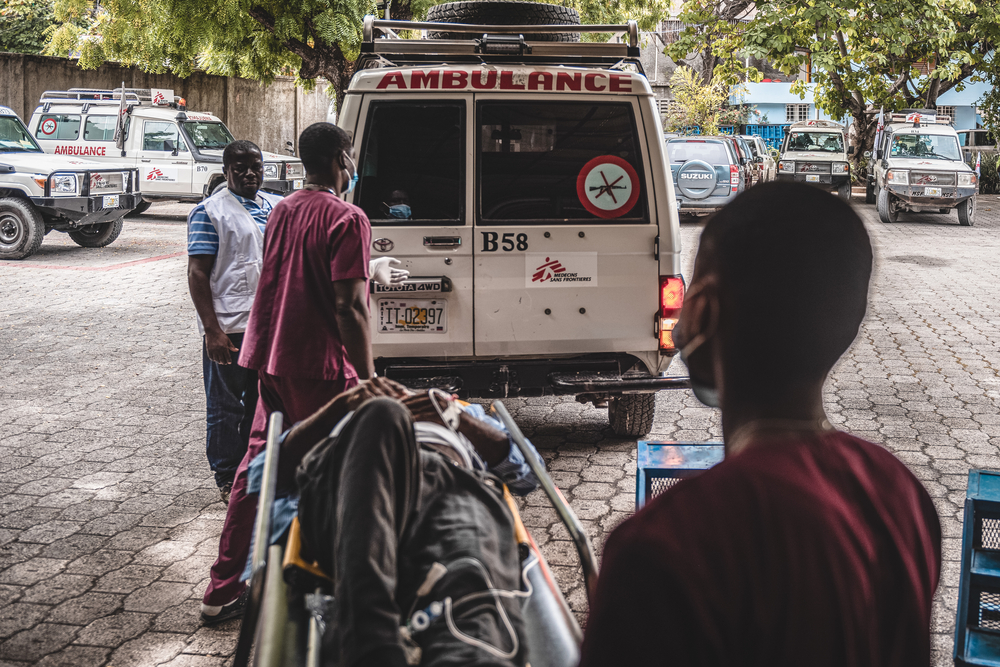 This patient, suffering from head trauma, was taken to the MSF emergency centre in Turgeau, Haiti

We’re at least dealing with fewer violent trauma cases now than we were earlier this year, but a “normal” amount of violence in Haiti is still pretty significant. It’s a challenge to juggle it all, and I’ve been trying to recruit and hire more international staff to come help. It’s not always easy to find people with the right experience. I try not to work more than 12-hour days because I need to save my energy and avoid burning out, but it’s tough when there’s always more work to do and people’s lives depend on it.

Many of the patients we treat are of poor socioeconomic status. They come from areas that are extremely densely populated, where the distance between houses is essentially non-existent. They’re living in makeshift, improvised structures, often with corrugated metal for a roof. The country also has a major issue with trash collection, and sometimes the roads are literally impassable because of all the garbage. There’s a lack of access to food and clean water, which leads to malnutrition. Cholera will attack the most vulnerable, so we see children who are already suffering from malnutrition, and then cholera just takes advantage of it.

Because of the fuel shortage, public transportation now costs three times what it did just a few months ago. Patients can’t afford to get around, not to mention the violence they may face in trying to do so. So they’re waiting longer before coming in, and many of the people we’re seeing are already severely dehydrated by the time they make it to us.

We treat cholera patients by rehydrating them using a specific IV solution called Ringer’s lactate, which contains a mixture of sodium chloride, sodium lactate, potassium chloride and calcium chloride in water. The illness causes a depletion of sodium and, if left untreated, it’s very easy to die from it. Sadly, we know the patients coming to us are just the tip of the iceberg. Transmission is likely happening in the community on a large scale, so we also have points set up outside churches, markets and other community gathering places where people can come to access oral rehydration salts. This solution, mixed with clean water, can help treat people who aren’t yet severely dehydrated. Some of the people coming to these points don’t even necessarily have cholera—they’re just desperate for clean water. 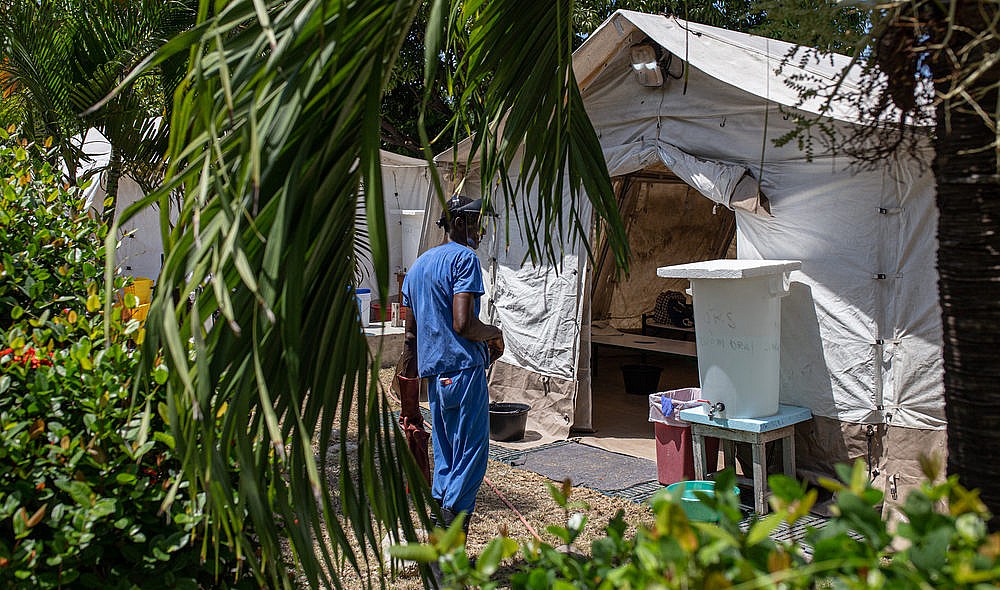 Working and living in Haiti comes with significant risks, and there are a number of protocols in place to ensure we stay safe. We never drive ourselves anywhere, we have an early curfew and there’s a radio room where every MSF employee is being tracked at all times. Aside from knowing I’m making a concrete difference in people’s lives, one of the best parts of this job is the strong friendships I’ve formed with my colleagues, many of whom are Haitians themselves. We live in close quarters in apartment buildings that MSF rents for us, and we support each other through unimaginably difficult situations. We laugh and share, and we also talk about our tough days. In the intensity comes a camaraderie, and those relationships can be really strong and special.

Everyone develops their own coping mechanisms to unwind and take their mind off things, and my go-tos are cooking and baking. Focusing on a recipe helps keep my hands and mind busy, plus I get to share whatever I’ve made with my colleagues and friends. Sharing food is one of the ways we bond—plus my staff can’t complain to me about work-related stuff if they’re busy eating my cookies.

Also, Haiti is in the Caribbean and it’s absolutely beautiful. Sometimes, if I’m high up enough and looking out at the ocean, I can trick my brain into momentarily forgetting about all the suffering going on down below. But then I remember all the people who so desperately need help, and I get right back to work.

Right now, we’re trying to open more beds and find new sites so we don’t have to keep treating patients in isolation tents in parking lots. We’re trying to go further out into the communities to reach the people who can’t get to us. We’re always trying to anticipate how many medical supplies we’ll need—things like IV fluids, for example. Recently we had to get a charter flight to deliver all the supplies we needed because we had no other way of getting them.

I’ll be here until April, so I’m doing my best to preserve my energy as best I can. And I know that when I leave, I’ll feel both relieved and guilty. Because I get to leave—that’s not the case for the people who live here and have to endure so much.

—As told to Mira Miller