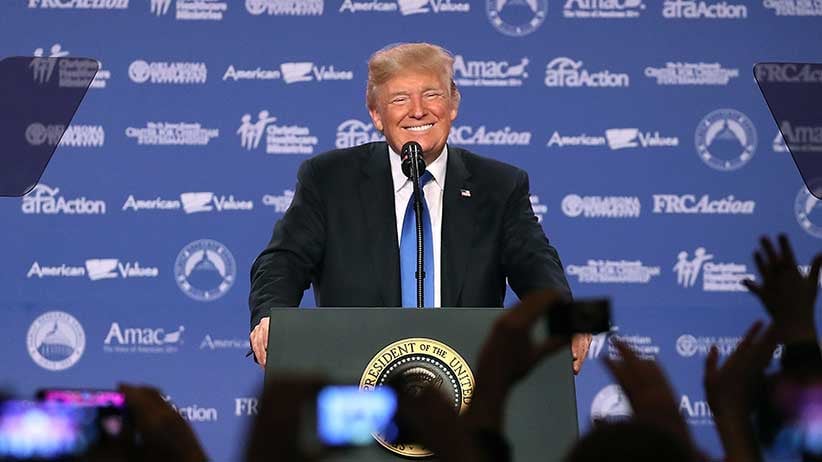 Offered to a whooping chorale of Christians as living proof that, as one Congressman proclaimed, “Our God still reigns over the affairs of nations,” Donald Trump thundered through one of the most active and bluntly effectual days of his presidency Friday, filleting a vital component of Obamacare, condemning the mullahs of Iran as “a fanatical regime that . . . spread death, destruction, and chaos all around the globe,” and boasting that his remaking of the United States Government is “substantially ahead of schedule.”

“We stand united behind the customs, beliefs and traditions that define who we are as a nation and as a people,” Trump said to cheers at the annual Values Voter Summit at a Washington hotel. The 45th president invoked the Christian piety of the first man to hold the office, noting that “George Washington said that ‘religion and morality are indispensable’ to America’s happiness, really, prosperity and totally to its success. It is our faith and our values that inspires us to give with charity, to act with courage and to sacrifice for what we know is right.”

“The American Founders invoked our Creator four times in the Declaration of Independence—four times,” Trump continued. “How times have changed.  But you know what, now they’re changing back again. We are stopping cold the attacks on Judeo-Christian values.”

(“The country wasn’t based on executive orders,” Trump said at a campaign stop in South Carolina in February 2016. “It’s a basic disaster. You can’t do it.” But that was 2016.)

READ MORE: How Trump and Trudeau heated up the White House

Later in the day, Trump would fulfill another of his core campaign promises—to reassess, if not immediately cancel, the multinational contract that is supposed to halt the Iranian rocket men’s nefarious march toward a thermonuclear arsenal.

“The nuclear deal threw Iran’s dictatorship a political and economic lifeline, providing urgently needed relief from the intense domestic pressure the sanctions had created,” Trump would declare. “It also gave the regime an immediate financial boost and over $100 billion dollars its government could use to fund terrorism.

“The regime also received a massive cash settlement of $1.7 billion from the United States, a large portion of which was physically loaded onto an airplane and flown into Iran.  Just imagine the sight of those huge piles of money being hauled off by the Iranians waiting at the airport for the cash.  I wonder where all that money went.”

But back at the Values Voter Summit, a man often accused of lyin’ was being thrown to the Christians.

“I pray for our president, that you would make of him a David,” a young state legislator from West Virginia beseeched in her invocation, to be followed by the stirring, Scripture-quoting Donald himself, boasting of keeping the promises he made in 2016 to the Evangelicals who helped to gain him his mortal throne, and thanking them, much as the King of Israel himself does in 2 Samuel 22:

“You have delivered me from the attacks of the peoples;
you have preserved me as the head of nations.
People I did not know now serve me,
foreigners cower before me;
as soon as they hear of me, they obey me.
They all lose heart;
they come trembling from their strongholds.”

“What about the profanities?” mused Bill Bennett, a cabinet secretary under Ronald Reagan, from the lectern.

“Just as every sinner has a future, every saint has a past,” Bennett answered, quoting Oscar Wilde.

“People fashion their God after their own understanding,” said Oscar Wilde. “They make their God first and worship him afterwards.”

A year ago, precious few Values Voters saw in Donald Trump an avenging warrior for the Lord. “It was a default vote, not so much that I voted for him,” said a Texan named Mark Russell, manning a booth on behalf of Christian Health Ministries, a mutual-aid society—barred to Jews, Muslims, Buddhists, Hindus and anyone else who will not sign a pledge that he or she is “living according to Biblical principles”—that helps to pay medical bills for other members, unless they abuse alcohol, use tobacco or marijuana, fail to attend church regularly, or become pregnant out of wedlock.

“It just strained my comprehension that anyone would say that Hillary Clinton was presidential material,” Russell recalled of October, 2016. “And for a long time, I thought the same thing about Donald Trump. There was some apprehension that he was just saying the things he was saying to win voters, and I wondered, ‘What Donald Trump would we get?’”

“So far, in the things he has done and the speeches he has given, I’m satisfied,” said Russell, who served in the U.S. Air Force during the Vietnam War. I appreciate his willingness to respond to things like Syria and Afghanistan, and his placing military control in the hands of military people.”

“I honestly see a man who intends well-being and who, deep in his heart, he genuinely wants to see positive change in our country,” said Meagen Weber, a pro-life activist from Coos Bay, Oregon. “I see a man who sincerely believes in strong family relationships. I believe that he has good intentions.”

“We think he’s doing wonderful things,” said Laura Ricketts of Virginia, who, like Weber, is affiliated with an anti-abortion organization named And Then There Were None.

“What could he do to change that?” Ricketts was asked.

“He could take a step toward siding with the abortion industry,” she answered, as Donald Trump left the hotel to the recorded strains of John Philip Sousa’s Washington Post March (which The Donald’s supporters would rename the Fake News Polka).

“Yes, I do,” he replied. I think that when they had those terrible floods last year in Baton Rouge, and went down there and he saw neighbour helping neighbour, he saw the ‘Cajun Navy’ helping people, that changed Donald Trump’s perceptions. He saw that true conservative values, not the values of New York, are the values of our nation.”