After a dress-code tweak at last year’s Royal Ascot, the fascinator was all but dead

This spring, major broadsheets across Britain reported the passing of a national icon. “The fascinator is dead,” declared celebrity hat-maker Philip Treacy, “and I’m delighted . . . We’re seeing a return to proper hats.”

In Hatatorium: An Essential Guide for Hat Collectors (2011), a “fascinator” is defined as “a small, ornamental head adornment comprised of feather, flowers and trims, but without the traditional crown-and-brim configuration of a hat.” Imagine the pennants and plumage that might bedeck a British lady’s special-occasion hat—but without the hat itself. (Fascinators typically consist of embellished headbands or hair clips.) If you like, add a petite veil. And then perch the whole concoction at a rakish angle.

The fascinator’s decline was a swift one. Just a few years ago, fascinators were all the rage in London. Commonfolk such as this author favoured the simple versions sold cheaply at high-street chains: hairbands with a few peacock feathers sewed on. But even the Queen was on board; she wore a wee brown fascinator to her eldest grandson’s wedding in 2008.

The 2011 wedding of Prince William and Kate Middleton was another fascinator-studded affair—though some of the headpieces were received less than warmly. (Journalist Tina Brown famously described Princess Beatrice’s pinkish fascinator as “entwined prawn-coloured entrails.”) In the wedding’s aftermath, the Telegraph reported that worldwide fascinator sales soared 300 per cent.

It all started last year, at Royal Ascot, the famous high-society affair founded by Queen Anne in 1711, at a racetrack in Berkshire. Organizers tweaked the dress code—banning fascinators from the exclusive royal enclosure. They even trained a team of “dress code assistants” to hunt down sartorial rule-breakers—and supply them with emergency headgear.

The widely reported fascinator ban, and the wildly flamboyant hats that it inspired, have had a trickle-down effect on the industry. Mary Flack of the chi-chi Fenwick department store—which boasts London’s “only hat department with a major space on the ground floor”—said the store is stocking fewer fascinators, but that its “proper hats have shown increased sales.” John Lewis, another department store, says its sales of formal hats are up 41 per cent.

Some commentators peg the shift to a broader change in taste: a reaction against bland, mass-produced clothing—and a fetishizing of vintage items, bespoke craftwork and nostalgic thrift-shop finds. Others say it’s the old “Kate Middleton effect.” Avid Kate watchers will note that the duchess has all but abandoned her once-preferred fascinators.

Fascinators first became popular alternatives to hats in the ’60s, not only because they better accommodated the bouffant hairdos of the day. They were also a better fit with contemporary politics, unburdened by old-fashioned notions of status, etiquette and generally “knowing one’s place,” according to Karen Henriksen’s Fashion Hats.

But history favours the hat. And this month’s Royal Ascot will surely be a great demonstration of its resilience. Tracy Rose, a noted London milliner and author of Fashion Fabulous London, admits that many of her clients were distraught when the dress code first changed. “They think a hat might ruin their hairstyles,” she said. But Rose says they have since come around. This year, many of her clients are asking for “something with a really big brim, in quite flamboyant colours. There’s quite a lot of shocking pink.”

James Sherwood, British fashion writer and noted dandy, is “absolutely delighted” by it all. He has spent many years at Ascot, commentating for the BBC. “We always frowned on fascinators,” he insists. “They always looked faintly ridiculous. To wear a little tuft of chicken feathers on a headband in the royal enclosure!” 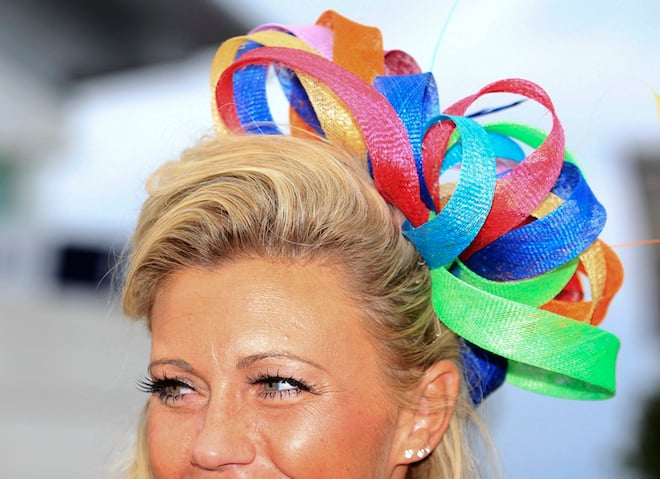 A woman wears a fascinator on Ladies Day Derby at Epsom races in Epsom, southern England on June 1, 2012. (Olivia Harris/Reuters)