He's a hero to U.S. soldiers. Will the U.S. let him return home?

Visiting Kirkuk on a trip, military interpreter Alan Adil Abdullah isn't sure what will happen when he tries to return to his kids and home in Seattle 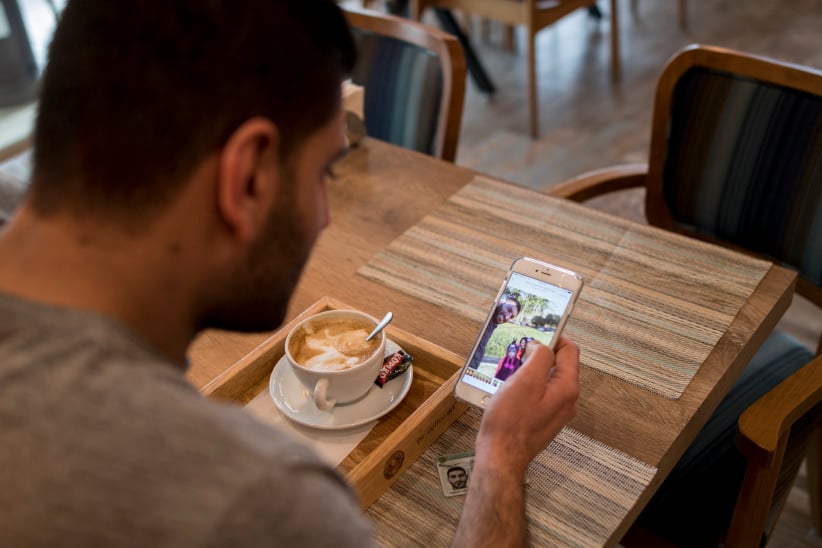 Alan Adil Abdullah scrolls through pictures of the wife and children he left behind in Seattle, Washington when he returned to Iraq to care for his ailing mother. A former interpreter who worked with U.S. troops in Iraq, Abdullah was affected by President Donald Trump’s executive order banning Iraqis from entering the U.S. for a 90-day period. (Photograph by Adnan Khan)

Like so many other men and women who have fallen under the accusatory glare of U.S. President Donald Trump, Alan Adil Abdullah is terrified. The 30-year-old father of two never suspected that the newly installed leader of the free world would threaten his own freedom.

Abdullah’s fear is particularly tragic. For six years beginning in 2006, when he was only 19 years old, he was hired by the U.S. military to work as an interpreter in Kirkuk, his hometown 350 km north of the Iraqi capital of Baghdad. Kirkuk, like many parts of Iraq, was in the grip of a violent insurgency. Suicide attacks carried out by al-Qaeda in Iraq, the predecessor of the so-called Islamic State, were decimating the civilian population and tearing apart the city’s social fabric.

It was a thankless and supremely dangerous occupation. On at least 10 occasions, improvised explosive devices hit the patrols he accompanied. He was injured twice, once so badly that he had to be evacuated to an American base for emergency surgery.

But the fear he feels now, he says, is infinitely more acute.

“I’m afraid I will never see my children again,” he says, choking back tears at a cafe in Erbil, the capital of Iraq’s Kurdistan region. “I had no idea what Trump was about to do. If I’d known, I would never have left the U.S.,” he says, referring to the executive order banning citizens of seven Muslim-majority countries, including Iraq, from entering the U.S. for 90 days.

His story is by no means atypical. Like many other interpreters who worked with U.S. troops in Iraq and Afghanistan, the men and women in uniform he served alongside consider him a hero. He earned his U.S. permanent residency green card by placing his life on the line to help U.S. troops navigate the deadly streets of Iraq. Now he is a threat in the eyes of America.

After the U.S. war in Iraq, Abdullah was given a chance to start a new life in the United States—but he did not immediately leap at the opportunity. When U.S. troops left Iraq in 2011, Abdullah, his wife, and his son were left exposed. Iraqis who had worked with the Americans were walking targets, not only for al-Qaeda terrorists, but also Shia militiamen who viewed them as collaborators during the foreign occupation. To add to his troubles, his son was diagnosed with dilated cardiomyopathy, a congenital heart condition passed down from his mother. In Iraq, neither of his family members was receiving the treatment they needed.

Still, he stubbornly refused to leave his home, bearing the burden of supporting his wife, son, parents and two younger siblings. But in the summer of 2015, after the birth of his daughter—who was also diagnosed with dilated cardiomyopathy—he decided he should leave.

“I made the decision because of my kids,” he says. “All I could think about was how I would build a life for them in Iraq if they were always sick. At least in the U.S. they would have the chance to lead a normal life.”

He applied for the special visa for former interpreters in July that year and after 2½ years of detailed vetting, including numerous interviews and health tests, he and his family were granted immigration visas. They settled in February 2016 in Seattle.

“I can’t describe to you the feeling I felt when we arrived,” he says. “It was like being reborn. From the airport I could tell already that we would have a good life. I knew my kids would be safe.”

But less than a year later, he was compelled to return to Iraq after his mother suffered a spinal injury in a fall and was slated for surgery. Alan decided to fly back to convince his mother not to go through with surgery at a local hospital, where facilities lack the sophistication to deal with such a delicate procedure.

He arrived in Erbil on Jan. 21 and immediately made the 45-minute drive to Kirkuk. His intention was to stay with his family for 10 days, enough time to figure out how to help his mother and then fly home. But on Jan. 28, a day after Trump signed the executive order, he was told by World Relief, a U.S.-based organization that helps refugees settle in their adoptive countries, that he should delay his return.

As of this writing, Abdullah is preparing to fly home. He says he will deal with whatever consequences he will face so he can be reunited with his wife and children. On Sunday, the White House indicated that permanent resident green card holders will not be barred from re-entering the country but that they will face “more questioning” at the border.

Surprisingly, despite his ordeal over the last few days, he remains an adamant supporter of the United States. “I know the American people,” he says. “Most of them are awesome. I still believe in America. But you know, I will tell you something: six months before the U.S. election, some students from a university came to my house to ask me some questions about how I was doing as a refugee. When they were finished, I asked them: ‘Are you going to vote?’ They said no. I said they should. We Iraqis have seen what can happen if you do not pay attention to politics. You can end up with a president who is very dangerous for your country.”